“God sure is clever,” my friend, Nellie Edwards and I often say to one another.  It is understood between us as an understatement of God’s often subtle and surprising ways.
I imagine that Satan has been surprised a few times by God’s cleverness.  The devil chose Hell rather than to humble himself.  How ironic that God saved us through his own humility.


No one could have expected God, to become a baby, born in a manager, raised by a carpenter, and put to death on a cross, to save the world; least of all Satan. The devil preferred to leave Heaven for eternity in Hell rather than to humble himself before his creator.  And his first big score against humanity—original sin—was made possible through the pride of Adam and Eve eating the fruit so they would become like God.  Humility would have protected them from their foolishness.
How infinitely clever it is that through our humility and thus obedience to God, the devil is defeated.  St. John Vianney, the Curé of Ars, who was often harassed by the devil, related a conversation with him. “I can do everything you do, I can also do your penances, I can imitate you in everything. There is one thing, however, that I cannot do, I cannot imitate you in humility."
"That is why I defeat you,” St. Vianny responded.
In my interviews with several exorcists over the years, their message is consistent:  humility, which ends in prayer, adoration, and the sacraments, are the most powerful tools against the devil.  How fitting it is then, that the Blessed Mother, the holiest and most humble mother of our Savior Jesus Christ, would defeat Satan through her humility with the lowest part of her body—her heel.
Mary, our beloved Blessed Mother, is found  referenced in the first book of the Bible, the Book of Genesis (3:15): "I will put enmities between thee and the women, and thy seed and her seed; she shall crush thy head, and thou shalt lie in wait for her heel."
Michael Brown wrote an article for Spirit Daily on the Heel that will crush Satan. He pointed out that the Miraculous Medal revealed in 1830 to St. Catherine Labouré in France shows the Blessed Mother stepping on the serpent. And in the apparitions of Our Lady of Guadalupe in Mexico her very name in the native tongue means, “Who crushes the serpent.”
Brown quoted St. Louis Marie de Montfort on the humble power of Mary in his work True Devotion to Mary:  "...Mary's power over the evil spirits will especially shine forth in the latter times, when Satan will lie in wait for her heel, that is, for her humble servants and her poor children whom she will rouse to fight against him...They will be great and exalted before God in holiness. They will be superior to all creatures by their great zeal and so strongly will they be supported by divine assistance that, in union with Mary, they will crush the head of Satan with their heel, that is, their humility, and bring victory to Jesus Christ" (TD, No. 54).
So we can feel secure standing at the feet of Mary, our Heavenly Mother, ever humble, always pointing to God: “And Mary said, ‘Behold the handmaid of the Lord; be it unto me according to thy word’” Luke 1:38.
“His mother said to the servants, ‘Do whatever he tells you’” John 2:5.
God used humility as a powerful weapon against evil and gave us His Mother Mary, the humblest and most blessed of all, to defeat the devil in the lowliest way—with the heel of her foot.
The Blessed Mother does not face off in combat with the devil.  She refers all to her Divine Son and the devil is defeated under her feet.  And so, we stand at the feet of Mary, knowing it is a place of Divine protection, and oh, so very clever of God.

Follow-up note:  In the comment section, it has been brought up that when St. Jerome had translated the Old Testament in Hebrew to Latin  he mistakenly changed the masculine pronoun  "he" into "she"  resulting in the error of Mary crushing the head of satan rather than Jesus being the one.  Upon checking with my parish priest, Fr. Nick Schnieder,  who has a doctorate in liturgy, he agreed that St. Jerome was in error using "she" instead of "he" in the translation, the Vulgate.  However, he said that many others understood both Hebrew and Latin and did not correct it initially (although later versions did) because the theology is correct in that Mary plays a role in crushing the head of satan.  And it is correct that it is the humility of both Mary and Jesus (and of course the power of God) that defeats Satan. 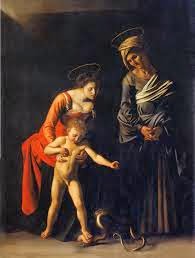 Ultimately, it is her humility that allowed her to become the mother of Jesus.  Fr. Nick referred to the painting on the left , The Madonna and Child with St. Anne (Dei Palafrenieri) by Italian Baroque master Caravaggio ,as depicting the theology of Mary's important role in crushing satan.

More of Nellie's artwork can be seen at PaintedFaith.net