May 13 is the Feast of Our Lady of Fatima. In a world growing more skeptical of God and cynical of religion, there is Fatima.  It is where our Blessed Mother appeared to three shepherd children and where a public miracle was witnessed before tens of thousands.

In Fatima, two anti-Catholic socialist newspapers sent reporters to witness how foolish it was that so many people came out believing there would be a miracle. Instead, the papers carried reports of an amazing miracle witnessed by all who were there.

It was the event on May 13, 1917 that first brought Fatima to the attention of the world. At that time, the people lived primarily a peasant life, much like they still do today.  World War I was taking place. On this day, three young children, Lucia, 10, Francisco, 9, and his sister Jacinta, 7,were tending a flock of sheep in a field in the outskirts of Fatima. 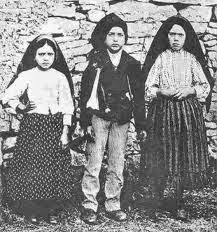 Around midday, they prayed the Rosary, as was their habit after lunch.  Suddenly, a flash of light in the sky made them think lightening was warning of an impending storm.  There was another flash and then a beautiful Lady, brighter than the sun and holding a rosary, stood over the top of a small Holm Oak tree.  She explained: “I am the Lady of the Rosary” and told them to pray, do penance and to make sacrifices to save sinners. She invited the children to return to the Cove of Iria during the next five consecutive months on the 13th at the very same hour.
They did as she asked.  During June, July, September and October, the Lady returned in the Cova da Irai.  In August, the apparition took place in a small farm on the 15th because government officials on the 13th of that month had taken the children away.  They were deceived, jailed and then threatened with being boiled in oil if they did not recant their story of the vision.  The children stood by their story even in the face of death.
What took place on October 13 became known as "Miracle of the Sun.”  Eyewitness reports estimate the crowd that gathered that day to be anywhere from 75,000 or 100,000. Some who had gathered were skeptics; anxious to show the Catholics to be fools for believing the Blessed Mother was appearing.  Regardless of preconceived beliefs, everyone saw the same thing. 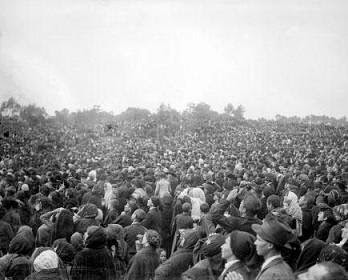 At noon, the driving rain stopped and the clouds parted.  Many thousands of witnesses corroborated that during the next 12 minutes, the sun seemed to leave its orbit and spin, throwing off colors of light.  Everything on the ground reflected its radiance.  Then it spun on its axis and the rim became scarlet and bursts of flames scattered across the sky.  Amazement turned to terror as the sun appeared to plummet to earth. People cried out and prayed, fearing it was the end of the world. Then, it stopped and a strange breeze swept through and instantly dried clothing, ground and puddles everywhere.  People within a twenty-mile radius saw the event.

Government officials from the anti-Catholic socialist regime, police officers, and journalists, who were there not out of faith but to investigate, reported seeing the miraculous event.  The two major newspapers carried the same reports of a miracle.

At this same time, the children of Fatima saw the following vision as described by Sr. Lucia in Letter from Sr. Lucia to her Bishop, December 8, 1941, Tuy, Spain.:  “When our Lady disappeared in the immense distance of the sky, next to the sun, we saw St. Joseph holding the child Jesus and Our Lady dressed in white with a blue mantle.  St. Joseph and the child seemed to be blessing the world, making the sign of the cross.”

Columnist Avelino de Almeida of O Século (Portugal's most influential newspaper, which was pro-government and anti-religious) reported the following: "Before the astonished eyes of the crowd, whose aspect was Biblical as they stood bare-headed, eagerly searching the sky, the sun trembled, made sudden incredible movements outside all cosmic laws - the sun 'danced' according to the typical expression of the people."
During the apparitions, the children were asked to pray and offer sacrifices as acts of reparation for souls.   “Pray the Rosary every day to obtain peace in the world and the end of war,” Lucia reported her saying.

St. John Paul II and Our Lady of Fatima
Pope John Paul II credited Our Lady of Fatima with saving his life on May 13, 1981—the same day and at the same hour of the first apparition at Fatima. Before a crowd of 20,000 in St. Peter’s Square at the Vatican, a Turkish citizen, Mehmet Ali Agca, fired four bullets at the pope from about 15 feet away.  The one that hit him narrowly missed his vital organs. 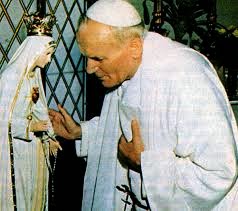 John Paul II reflected: "Agca knew how to shoot, and he certainly shot to kill. Yet it was as if someone was guiding and deflecting that bullet." That "someone," John Paul believed, was the Woman of Fatima. "Could I forget that the event in St. Peter’s Square took place on the day and at the hour when the first appearance of the Mother of Christ ... has been remembered ... at Fatima in Portugal? For in everything that happened to me on that very day, I felt that extraordinary motherly protection and care, which turned out to be stronger than the deadly bullet" (Memory and Identity pp. 159, 163).
On December 27, 1983 JP II went to the prison and forgave his would-be assassin.  The pope held the hand of the gunman who shot to kill him and said, “Brother I forgive you.” They talked quietly for 21 minutes. It was reported that the gunman who, revealed he was a hired professional, could not understand how he failed in his attempt.

Our Lady of Fatima’s “Peace Plan”
Every time Our Lady appeared to the three shepherd children she asked the children to pray the rosary. And if we do what she asks, then she will fulfill her promise that: “In the end my Immaculate Heart would triumph.”
Pope John Paul II said: “The Rosary is by nature a prayer for peace…focusing our eyes on Christ. The Rosary also makes us peacemakers in the world.  Pray the Rosary daily! The Rosary can end wars! The Rosary can bring world peace.”

First Five Saturdays
The First Five Saturdays devotion has some powerful promises attached for all who participate. Our Lady told Sr. Lucia that she promised to assist at the hour of death with all the graces necessary for salvation all those who, on the first Saturday of five consecutive months, go to Confession and received Holy Communion, recite five decades of the Rosary and keep her company for a quarter of an hour while mediating on the mysteries of the Rosary, with the intention of making reparation for sins.”  Everything is to be offered to make reparation for sin.

Fulfilling Our Lady’s requests for the five First Saturdays includes:
1. Receive our Lord in Holy Communion while in the state of grace.
2. Recite five decades of the Rosary.
3. Keep Mary company for at least 15 minutes while mediating on the mysteries of the Rosary.
4. Go to Confession within the month.

In the Church, Saturday has traditionally been a special day to honor Mary, the Mother of God.

For more inspiration, check out Big Hearted: Inspiring Stories From Everyday Families  uplifting stories on love and life. Children's books,  Dear God, I Don't Get It and Dear God, You Can't Be Serious are fiction that present faith through fun and adventuresome  stories.  Follow Patti at Twitter and like her Facebook pages at Dear God Books,  Big Hearted Families