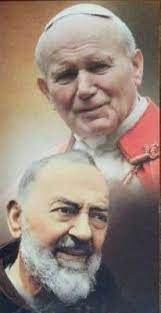 On the eve of this momentous day, I picked up my copy of 100 Ways John Paul II Changed the World by Patrick Novecosky. St. Pope John Paul's 27 years as pope began while I was in college in 1978, so I witnessed that he did indeed change the world. I have a portrait of him in my bedroom and often ask his intercession.

I was intrigued to read in Novecosky’s book of a meeting that St. John Paul had with another of my beloved saints—St. Padre Pio (May 25, 1887 –  September 23, 1968), an Italian Franciscan Capuchin priest who was a stigmatist, mystic, had the gift of reading souls, healing, and bilocation. The two spiritual powerhouses would become friends and first met in 1947, shortly after the future pope, Fr. Karol Wojtyla was ordained. Padre Pio’s fame had spread far and wide after he received the stigmata in 1918 at the age of thirty-one.

Fr. Wojtyla made a week-long pilgrimage to visit Padre Pio in his Italian town of San Giovanni Rotondo. Imagine that day, while unbeknownst to them, Fr. Wojtyla would one day become Pope and beautify his holy friend in 1999 and canonize him in 2002. Or did they know?  Some people suspected that on that day, Padre Pio had whispered to Fr. Wojtyla that he would become Pope. The rumor persisted for decades. After his election to the papacy, however, Pope John Paul II clarified that Padre Pio had said no such thing. 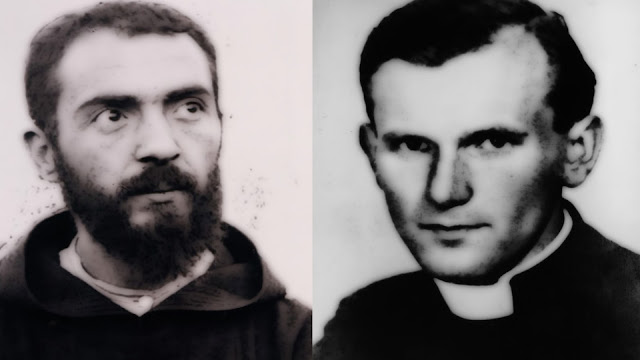 Instead, the holy Capuchin had shared a secret that he had told no one else. Novecosky quoted from a Catholic Herald article: “When Fr. Wojtyla asked Padre Pio which one of his wounds (from the stigmata) caused him the most suffering, Padre Pio divulged, ‘it is my shoulder wound, which no one knows about and has never been cured or treated.’  …Fr. Wojtyla was the only person that Padre Pio ever told about this most painful and bloody wound.”

Novecosky explained further: “During a visit to Rome in 1962, Archbishop Wojtyla learned that one of his polish friends was dying. He wrote to Pio asking his intercession. The letter was hand-delivered to the friar, who reportedly replied, ‘I cannot say no to this request.’ Eleven days later, Wojtyla sent Pio a second letter thanking him for his intercession: ‘The lady who was ill with cancer was suddenly healed before entering the operating room.’”

According to Novecosky, when John Paul canonized St. Pio in 2002, he noted that the holy friar’s “spiritual fruitfulness can be found in that intimate and constant union with God, attested to by his long hours spent in prayer and in the confessional. He loved to repeat, ‘I am a poor Franciscan who prays, convinced that ‘prayer is the best weapon we have, a key that opens the heart of God.’”

How blessed we are by these two saints and all the others who can intercede for our intentions. May we follow their holy examples and use that same weapon of prayer to open the heart of God.  St. Pope John Paul II, St. Pio and all you holy men and women, pray for us!