How a Little-known Apparition in Belgium is Renewing Lives 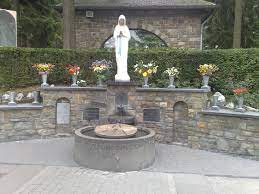 In 1933, as the stage was being set for World War II, our Blessed Mother appeared in Banneux, Belgium. She came as a messenger of peace and mother of the poor; inviting each person to care for his brothers and sisters, the lowliest, and the suffering. I knew nothing of these apparitions until this past June when I witnessed the effects—a divine chain reaction— sparked by the apparitions that inspired a priest who changed the lives of untold thousands.

My husband and I had taken a side trip from our pilgrimage to the Basilica of Our Lady of Guadalupe to visit Girlstown in Chalco, Mexico. It is part of 18 different schools in 7 countries run by the Sisters of Mary. They feed the children physically, spiritually, and provide healing opportunities from many issues including past sexual abuse. Children are being renewed in these villages, mind, body and spirit and in turn renew their families and the Church.  The sisters go to the poorest villages finding children who want to come with the permission of their families. To date, 150,000 have graduated and 20,000 more are being cared for currently. When students graduate, they are offered scholarships to universities or trade schools. The goal is that they will then lift up their own families and others has they have been lifted. 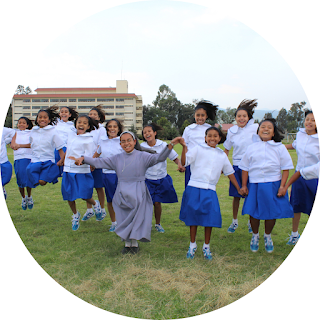 Kevin Wells, a fellow author and friend, had shown me a video of his time there while researching the biography of the founder, Venerable Fr. Aloysius Schwartz.

In Chalco, I glimpsed the miraculous impact of Our Blessed Mother’s apparitions in Banneux through the overwhelming love and joy and sheer immensity of the operation. Her messages had touched Fr. Al, a Washington, D.C. native who often visited the site in the mid-1950s as a seminarian studying theology at Louvain Catholic University in Belgium. In a chapel at the site one evening, he vowed to spend the reminder of his life serving the poor as a servant of Our Lady of Banneux who identified herself as the Virgin or the Poor. He began in Korea with war orphans.

“On December 8, 1957, in war-decimated Korea, he looked into the faces of poor children and for the first time saw that ‘eyes burned with a fierce, scared, hunted-animal expression.’” Kevin Wells wrote in the biography Priest and Beggar: The Heroic Life of Venerable Aloysius Schwartz. “It haunted him, so he worked at its removal.” 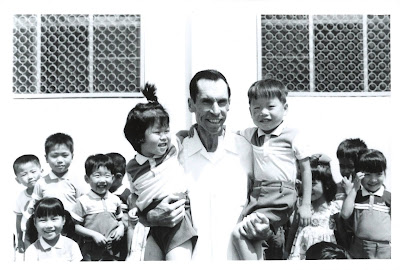 Fr. Al’s vow grew into World Villages and the founding of the Sisters of Mary and an order of brothers who dedicate their lives to the children, bringing the light of Christ into precious souls throughout South and Central America and the Far East.

Our Lady’s Visit to Banneux

In 1933, the Blessed Virgin visited two different cities in Belgium.  Her 33 apparitions in Beauraing, Belgium received by 5 children, ended on January 3rd. Two weeks later, on January 15, twelve-year-old Mariette Beco peered out the kitchen window and saw a beautiful lady glowing in the evening darkness.  A woman in white stood in the garden and called to her to come out, but her mother would not let her. She is described as a young lady in the yard smiling at her. The woman was bent slightly forward and wearing a long white gown with a blue sash, and a transparent white veil. Three days later the woman in white reappeared and told Mariette she was the “Virgin of the Poor."  The lady appeared eight times in all on January 18, 19, 20, February 11, February 15, February 20, and March 2, 1933. Our Lady'sPromises.org shares a timeline of the apparitions.

In Banneux, Mary renewed the Beauraing message when she told the children to pray, pray very much, pray always. Through Mariette, Mary asked many times to pray very much.

In Priest and Beggar, Wells explains that during the second apparition, Our Lady beckoned Mariette to come outside. Her father followed as Mariette ran outside to follow the lady. He watched his daughter thrust her hands into a cold spring which he had never noticed on their property before. Mary told Mariette that the spring was set apart for her (Mary), for all the nations, and for the sick.  Mary had said in Banneux, “I come to relieve the sick” and “I come to relieve suffering.”  She also told Mariette, “Have faith in me…I shall trust you…pray earnestly.” (Today, the small spring yields about 2,000 gallons of water a day with many reports of miraculous healings.)

“The Beco family did not attend Mass until after the apparitions,” Wells wrote in the article,  Our Lady of Banneux: The Village, Priest, and Vow That Changed the World. “Her father, a baptized Catholic, had not been to Church in years and had no use for religion. God was not a part of the household. The young Mariette had been enrolled in religious instruction for First Communion but did so poorly that she dropped out of the classes. January 15th, the first day of the apparition, was a Sunday, and Mariette’s family did not attend Mass that day. Despite her living situation, Mary chooses this girl to receive a heavenly message. Many people, including Mariette's father, were converted to Catholicism upon hearing accounts of the apparition.”

Mariette’s claims were investigated from 1935 to 1937 by an episcopal commission.  In May 1942, Bishop Kerkhofs of Belgium approved the apparitions in 1949.  After the apparitions, Mariette married and led a quiet family life.  A small chapel stands where the Virgin of the Poor requested it to be built. Mariette died on 2 December 2011, at the age of 90.  Five hundred thousand pilgrims visit the site of the apparitions every year.

According to the World Villages website, Fr. Al had consecrated his life to Mary and offered to suffer for her as Her own Son once did. When he began the Sisters of Mary order in 1964, he asked them to suffer for the poor as well. “The whole drama of the apparitions is to draw the child from her home, from herself, and to Christ,” Fr Al once told a gathering of Sisters. “The way is prayer and penance … This type of love demands great sacrifice, great mortification. He told them that that they must “be a living mirror who reflects Our Lady of Banneux and show the world what she is like and what her thinking is.”

Fr. Al refashioned his life after the apparitions to change the lives of many tens of thousands of poverty-stricken children. What he accomplished is beyond human efforts.

Pray for the poor. visit WorldVillages.org.

Watch this video to learn more about Kevin Wells.

To book Kevin as a speaker, visit ThePriestsWeNeed.com. 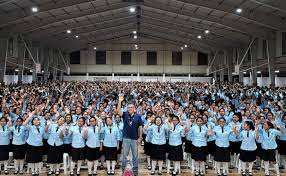