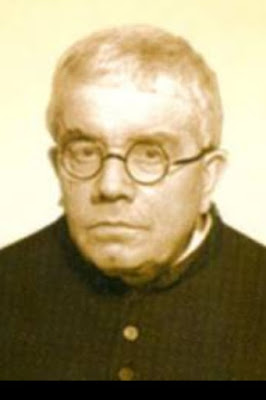 "It is the duty of every Catholic to contribute to the salvation of souls," -Fr. Ruotolo.
St. Francis and St. Padre Pio are two much loved saints that bore the wounds of Christ.  But how many know about Father Don Dolindo Ruotolo, a contemporary of Padre Pio?


I knew nothing about him until someone gave me a holy card with a novena of holy surrender that he wrote. Researching Father Ruotolo, I was amazed to learn of his renowned holiness and inspirational writings. His cause for canonization has been opened and being promoted by the Archdiocese of Naples and the Franciscans of the Immaculate.  He is currently a “Servant of God” deemed worthy of further investigation for the possibility of sainthood.

Praised by Padre Pio
Father Ruotolo was a Franciscan priest born in Naples, Italy on October 6th 1882 and died there at the age of 88 on November 19, 1970, His cause for canonization has been opened and he is venerated as a Servant of God.  During his life, he was known by many for his holiness.  Padre Pio of Pietrelcina once said to a group of pilgrims from Naples: “Why do you come here, if you have Don Dolindo in Naples? Go to him, he’s a saint!”
His biographer Luca Sorrentino called him “a faithful servant who wanted to be the nothing of all nothings in God, and the everything of God in men.”
Despite great humility and a hidden life, he was revered by many as a prophet.  In 1965 he wrote to Bishop Hnilica that, "a new John will rise out of Poland with heroic steps to break the chains beyond the boundaries imposed by the communist tyranny."  This came to pass under Saint Pope John Paul II when Lech Walesa headed Solidarity, the Soviet bloc’s first independent trade union that ultimately defeated communism in Poland. Walesa served as president there from 1990-95 and won the Nobel Peace Prize in 1983.
Father Ruotolo offered up his tremendous physical sufferings and said: "I am totally poor, a poor nothing.  My strength is my prayer; my leader is the will of God which I let Him take me by the hand.  My security over the uneven path is the heavenly mother Mary."

Quotes from Father Ruotolo
Father Ruotolo warned that inactive souls are more numerous than those who with full and absolute trust in God, dedicated to the good of all.  Here are some of his quotes translated on the site Rorate Caeli.
“Fear and human respect prevail in a great many Catholics, who are content to camp in the Church, but never move into action…Yet it is the duty of every Christian to contribute to the salvation of souls; if a sinner experienced rebuke, help, exhortation and is assailed by the insistence of his brothers, it would be more difficult for him to fall into the depths of the abyss. We see, very painfully, the opposite: sinners are left to rot in their deplorable state, and the just are attacked by the hostility and mockery of others. It is a horrible thing!
[From "La Sacra Scrittura", volume V, by Don Dolindo Ruotolo, Apostolato Stampa]
The Church honors with particular veneration the Most Holy Virgin, the masterpiece of creation, the Mother of God, Co-Redemptrix of the human race, Mediatrix of all graces, Mother of all mankind and the Church’s Most Loving Mother […] it is very salutary to make Most Holy Mary known and loved, since deep and ardent devotion towards a Mother so great, is the infallible secret of the Christian life and eternal salvation. [From "Slanci di amore", by Don Dolindo Ruotolo].
Some of Father Ruotolo’s writings were published in 1949 in the book Come Holy Spirit, which combines theology with meditations to deepen the presence of the Holy Spirit in souls.  It has become a classic in Italy as an explanation of the role of the Holy Spirit as bestowed in Confirmation.

Rosary of Abandonment by Fr. Ruotolo

God come to my assistance
Lord, make haste to help me.
Say a Glory Be, Our Father, Hail Mary.