Our Lady of Loretto; Miracle of her House 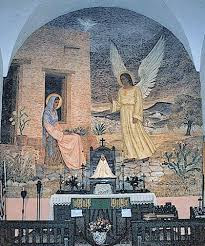 The simple stone house in which the Virgin Mary was born, received the message of an angel at the Annunciation, and lived with the Holy Family, is believed to be in the town of Loretto, Italy. To the marvel of scientists, the House of Loretto disappeared from Nazareth and moved to Croatia and then later to three spots in Italy in a way that defies human explanation.

According to historians, after thirteen centuries in Nazareth, on May 10, 1291, the house of the Holy Family disappeared overnight, completely undetected, confounding the community. It is believed to have been carried by angels first to the town of Trsat, an area in modern day Croatia. It baffled the townspeople there, for how could a house simply appear overnight? It is remarkable to know that just three years later, Muslim’s invaded the land around Nazareth and ransacked everything. Surely the house would have been destroyed.

Blessed Anne Catherine Emmerich (September 8, 1774 – February 9, 1824) reported that among her mystical experiences was a reoccurring vision of  the Holy House carried over the sea by seven angels. Historical, scientific and archeological evidence attests that there is no other logical explanation.

Father Donald Calloway, Vocation Director for the Marians of the Immaculate Conception and an author of five books on the Rosary, visited the House of Loretto four years ago. “You get a sense of this being an extraordinary relic and that you are in a very holy place,” he said in an interview. “It’s almost overwhelming, like a spiritual generator.”

Father Calloway wrote about the House of Loretto in his newest book Consecration to St. Joseph: The Wonders of Our Spiritual Father. He explained the path it took before its last resting place in Loretto.  The house’s first stop was in Trsat Coratia. Villagers were amazed and noted it had no foundation. After three years, it disappeared again on December 10, 1294, leaving only an outline of the spot it had been. To this day, a monument marks that spot.

From there it was taken across the Adriatic Sea to the town of Piceno, Italy. It was there for only eight months as robbers began stealing from the pilgrims. In August 1295, the house disappeared yet again and reappeared on a hill near Picano. But the two brothers who owned the land, fought over ownership and also exploited tourists for financial gain. So near the end of December 1295, the holy house was taken to its final location in Loreto.

A year later after the house appeared in Loretto, the Catholic Church appointed sixteen envoys to investigate. They visited Loretto, Croatia, and Nazareth.  At all locations, the measurements of the house were exactly the same with absolutely no discrepancies. In 1469, The Basilica della Santa Casa (Basilica of the Holy House) was built over the Holy House where it still stands today, attracting approximately four million pilgrims annually.

Many saints have visited both before and after it moved. Biographers of Saint Francis of Assisi, wrote that he visited the house in 1220 in Nazareth, and Saint Louis, King of France visited it on the feast of the Annunciation in 1251. Other saints that visited include Saint Francis Xavier, Saint Charles Borromeo, Saint Francis Borgia, Saint Aloysius Gonzga, and Saint Therese of Lisieux.

An inscription from the sixteenth century on the eastern façade of the Basilica reads: "Christian pilgrim, you have before your eyes the Holy House of Loretto, venerable throughout the world on account of the Divine mysteries accomplished in it and the glorious miracles herein wrought. It is here that most holy Mary, Mother of God was born, here that she was saluted by the Angel, here that the eternal Word of God was made Flesh….”

A scientific study undertaken by Professor Giorgio Nicolini was presented at a conference organized by the “Amici del Timone” Cultural Center in Staggia Senese, Italy held on April 24, 2015. His talk was titled “The Story of the Incredible Move of the House of Mary of Nazareth to Loretto.”

Nicolini pointed out the impossibility of transporting the house over sea completely restored given the poor technological resources of the time. He cited the existence of many documents and eyewitness accounts and noted that the chemical composition of the house’s stones, wood, and mortar are unique to the region of Nazareth and non-existent in all of Italy.

Detractors have claimed that a wealthy family had dismantled the house and transported it brick by brick at the request of the Crusaders then rebuilt the house in Loreto. “Such an operation, with the transportation conditions of the thirteenth century, would have been a more miraculous feat than the angelic translation,” Nicolini said.

Pope Francis was one of almost 50 other popes who have visited or written about the house. He prayed at an altar built into the house on the feast of the Annunciation, March 25, 2019.  Then in October, he designated December 10 on the universal calendar as the feast of Our Lady of Loretto.  The decree stated that this new feast day “will help all people, especially families, youth and religious to imitate the virtues of the perfect disciple of the Gospel, the Virgin Mother, who, in conceiving the head of the Church also accepted us as her own.”

Email ThisBlogThis!Share to TwitterShare to FacebookShare to Pinterest
Labels: Blessed Mother, House of Loretto, miracle, Our Lady of Loretto