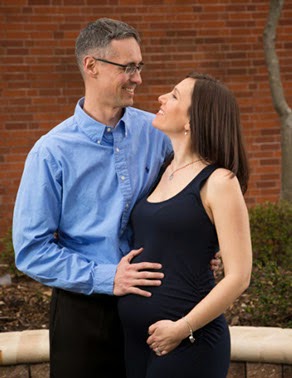 Chad Judice had a good thing going: a beautiful wife and a teaching job that he loved at a Catholic school seemed to complete his life.  The idea of fatherhood seemed too much.  So when his wife became pregnant with their first son, it scared him.  She was thrilled; he was not.  Why mess with a good thing?
But what could he do except to put on the happy face of an expectant father.  He relieved his stress by being critical and irritable to his wife.  Then, there was the pornography.  It’s not a big deal, he told himself.  I’m only human.


In an interview, Chad explained that before he experienced fatherhood, his faith and values were shallow. “My manhood was defined by how successful I was,” he said.  His shallowness surfaced after the announcement of the pregnancy. The initial news brought him to tears—but not the kind a father could be proud of.  The world had a stronghold on him.  Physical fitness, personal freedom, control over his life…fatherhood could interfere with those things.
Chad pointed to his weak prayer life as leading the way to moral relativism.   “This allowed me to make choices that led me to the slavery of sin,” he said.  He convinced himself that looking at other women but not touching was okay.  With such thinking, pornography was an easy next step. “In my mind I could control it, but in reality it was beginning to control me,” he said.  “As it says in John 8:34, “I say to you, everyone who commits sin is a slave to sin.”
The birth of his beautiful, healthy son Ephraim changed Chad’s thinking.  He fell deeply in love with both his child and God. “It hit me like a ton of bricks,” he said.  “If I loved my son this much, how much more does God the Father love me?”
But happy endings are not so easy. Life gets complicated. God soon faded back into the background and the pornography returned with plenty of excuses: baby fat, a tired wife, etc.
When a fellow teacher invited Chad to get involved in youth ministry at their Catholic school, he said yes.   He realized then, it was time to also say yes to God.  His growing relationship with God shone a spotlight on Chad’s conscience.  It was painful.  Prayer and Scripture took over and Chad found the strength to put the pornography behind him.

Once again, life was good.  Even the announcement of another pregnancy did not rattle him. The first ultrasound did though. His son had spina bifida.  Chad could not imagine having a handicapped child, but his friendship with Jesus was strong enough now that he knew where to turn.  Jesus became his strength and guide through this next chapter.
Chad publically walked the journey of acceptance of his disabled son Eli with two books. Waiting for Eli: A Father's Journey from Fear to Faith quickly sold 10,000 copies. So many people were writing to tell Chad that his story was “life changing” that he followed up with a second book, Eli's Reach: On the Value of Human Life and the Power of Prayer.  He could have stopped right there and called it good.  Except there was still one more hurdle to get over:  contraception.
Chad admits he was willfully ignorant that anything was wrong with using contraception.  Statistics reveal that a lot of Catholics choose the same ignorance.  It’s not the pope’s business…the Church doesn’t belong in my bedroom…you can’t expect us not to use some kind of protection….

God and prayer ruled Chad’s life now. He wanted to be in union with the Church, so he realized he had to embrace it all, convenient or not.  “Humility awakened within me a need to surrender the one last obstacle keeping Jesus from being at the center of my marriage, artificial contraception,” he said.
The journey to Natural Family Planning, according to Chad, was a journey of discovering “who am I and who is God?” “The transformation in my marriage after giving up contraception has been as dramatic as the transformation of Eli in our lives.”
By relying on God, Chad said he finally came to understand what it means to be a man. “Jesus Christ is the ultimate man’s man. He gave until it hurt and served until the moment He took his last breadth.  His actions defined the true meaning of love.”
He wants to tell the rest of the story now so that men cannot so easily slip into moral relativism, accept pornography or contraception for anything less than the evil that it is.  There is a third book on this that he hopes to publish soon.  “It is about a friendship with Jesus and being conformed into the man God created me to be.”