An incurable eye disease intruded on 16-year-old Johnny Atwell’s life almost overnight.  In October of 1974, the Glendive, Montana teen faced inevitable blindness. Johnny did not plead with God for a cure, however. Instead, he demanded one. God seemed not to be listening, but then something amazing happened.


Looking up at the chalkboard, Johnny squinted, trying to clear the haze around the letters his teacher wrote. “I must need new glasses,” he thought offhandedly, but did not bother to mention it to his parents. “ I was too busy doing my own thing to worry about it,” he recalled now as the adult, Fr. Basil Atwell, a monk and priest of Assumption Abbey, Richardton, ND. It hardly seemed urgent and besides, he knew his parents had little money to spare for their family of eight.
In just a matter of weeks, however, the haze grew dramatically worse, so that he knew something serious was happening.  His parents took him to several doctors before getting referred to the Eye, Ear, Nose, and Throat Clinic at the University Hospitals in Minneapolis.
“It was scary,” Genevieve explained in an interview from her home in Glendive last spring, before she passed away on June 12. “We had no money,” she said. “But my dad had old train passes and my mother took care of the other kids.” The passes were expired, but Burlington Northern Railroad accepted them in view of the circumstances.
Bleak Diagnosis
They arrived to see Dr. John Harris the following Monday morning.  As they walked down the long hall filled with people using canes and “seeing-eye dogs” on their way to the office, Atwell felt angry.  “I don’t belong here,” he thought.  “I’m not one of these.”
But he was. Corneal dystrophy was the diagnosis, a disease that ends in blindness.  “There’s no cure, but there’s a 50/50 chance that surgery could help,” the doctor told them.  Surgery would mean transplanting corneas from a cadaver hoping it would take.
Trying to squeeze back his tears, Atwell squeaked out one question: “How long?” They would have to wait and see. It could be 1 year or 10; they would know more when he returned for another checkup in 6 months.
The fear he had seen on his mother’s face tore at Atwell’s heart.  At home, the family gathered and learned of the diagnosis, and then he informed them never to speak of it again. “I told my parents: You cannot talk about it to anyone. I forbid you,” he explained. “I didn’t want to be the subject of anyone’s pity.”
Genevieve said that her husband was a great strength for her during this time. “He would hold my hand and we would just sit and pray,” she said. “I was afraid for Johnny. Whenever I get fearful, I turn to God because I don’t know what else to do.  I would talk to God and pray the Rosary.”
Encountering Christ
Atwell began a new nighttime routine after the dire diagnosis.  “Every night, on my bed, I would say over and over: Father, take it away, I cannot do this! Father, take it away!”  It was never a request, but always a demand.
When three months had passed, one night Atwell said to God: “Father, I can’t do this! I can’t go blind! You don’t understand, Father!”  But then, the ridiculousness of what he had just said, sunk in.  “'What did I just say?' I thought. 'He’s God. He understands everything.'”
Atwell then began praying the “Our Father” out loud—a prayer he had never said on his own before. “When I hit the words ‘Thy will’…, I was no longer in my bed,” he said. “I was in the Garden of Gethsemane with Jesus. His head was bowed down to the ground and he was shaking. I could see the glints of sweat and blood through his hair and I saw the moonlight.”
Immediately, Atwell understood that Jesus had just said to God the Father, “Not my will but yours be done.”
“Jesus began convulsing and weeping. I was in front of him, standing. The Father showed me the Son at the time Jesus gave his will over, obedient to his Father’s will,” Atwell explained.  “I felt so ashamed,” he said. “I started crying. All of a sudden it hit me like a ton of bricks, Jesus had given everything and I wasn’t willing to give my eyes. I told him, ‘I’m so sorry’.”

Suddenly, Atwell was back in his bed crying. “I am so sorry,” he repeated. “You gave everything and I wasn’t willing to give you my eyes.”  A peace immediately filled him. “Father, you can have my eyes…. You can have anything….You can have everything!” he prayed. “That’s when an electric feeling shot through me,” Atwell explained. “I felt it instantaneously, rising through me from the tips of my toes up to the top of my head. It was over in a split second. My eyes were open and in my dark bedroom I had absolute knowledge that I had been healed.
“Father, you aren’t going to take my eyes.” Atwell said out loud.
Then, he heard a human voice say clearly: “You have too much work to do.”
“Too much work to do? What does that mean?” Atwell asked. The next thing Atwell knew, it was morning, his eyes fluttered open at the light coming through the bedroom window. “I could see crystal clear,” he said.
Ecstatic, Atwell ran downstairs and told his mother to cancel the appointment in Minnesota because he was healed.  His mother was cautious. “You know they said it doesn’t cure itself,” she told him. Despite his objections, his parents made him keep his upcoming appointment in Minnesota.
When he did return to the eye clinic in May, one intern after another examined his eyes in disbelief. One asked: “Do you have a twin brother?” thinking a trick was being pulled. When Dr. Harris--the doctor who had given the original diagnosis--was brought in, he looked through his machine at Atwell’s eyes and moved the light back and forth. Then he flung it aside and said: “I hope you realize this is a miracle.”
Atwell was 17 at the time. It was that moment when he realized that he was called to be a priest. 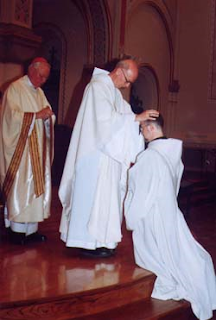 The miraculous experience was something Atwell kept to himself until he shared it with the formation director at the Benedictine monastery when he joined as a monk in 1979 and eventually took the name Basil.  Feeling unworthy of and intimidated by the priesthood, Atwell stayed a monk for 22 years until June 28, 2002, when Bishop Paul Zipfel ordained him a priest.
“When God gave my eyes back to me, I then had no idea what would later be required of me.” He said.  “Now, I understand that a priest must give all for the sake of all others, without deference and without discrimination as Saint Paul put on the new self, created in God’s way, in righteousness and holiness of truth" (Ephesians 4:22-24).

~~~~~~~~~~~~~
Fr. Basil Atwell, OSB is a Benedictine monk and priest of Assumption Abbey in North Dakota. With his abbot’s permission and appointment, he currently serves at the pleasure of the Bishop of the Diocese of Bismarck as pastor of the Catholic Indian Mission and its mission parishes, the Church of St. Peter in Chains in Fort Yates, the Church of St. James in Porcupine, and the Church of St. Elizabeth’s in Cannon Ball. He also oversees the mission’s K-7 elementary educational apostolate called St. Bernard Mission School.  In addition, Fr. Basil serves as pastor of the Churches of St. Philomena in Selfridge and Sacred Heart in Solen.