Treading into the Devils Domain 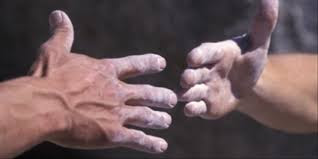 It’s not always for the faint of heart or spiritually unprotected, but there are opportunities to venture into the devil’s domain, praying (even if silently) and reaching out to the unsuspecting victims frequenting his lair.  Shouting out warnings or pushing Christianity on the uninterested has a high failure rate, but extending love and friendship has many successes.


Praying in front of an abortion clinic and doing sidewalk counseling is such an activity.  So is setting up a booth with models of unborn babies at a college “Sextravagenza” event, or giving gifts and food to strippers with a business card slipped in offering Christian friendship.

Sidewalk Counselor Prays with Abortion Facility Owner
My Dad, now 90 years old, led a prayer group in front of a now-closed (yay!) abortion facility in Dearborn, Michigan for many years.  Whenever there was a problem--such as a parking issue or not liking where the protestors were standing—the owner went to my Dad.  He was always friendly, respectful, and kind.  After several years of their cordial encounters, my Dad, who also brought Holy Communion to patients at two hospitals, came across her as a patient one morning. Surprisingly, she had identified herself as Catholic.
Although my Dad did not offer her Communion, he stopped by and chatted.  He also left her a pamphlet on Divine Mercy.  The next day when he was there again, the owner’s daughter called to my Dad when she spotted him in the hallway.  “The cleaning woman must have accidentally thrown away the pamphlet you left,” she explained.  “My mom wants to know if you can give her another one?”
He immediately went to her room, gave her another pamphlet and asked her if she would like him to pray with her.  She said yes and they prayed together, although the daughter appeared less than enthused.  Soon afterwards the clinic was sold and several years later, it closed.  We don’t know anything further on the former owner, but it certainly appeared very promising that she would turn to the mercy of Jesus.

Saving Strippers
Erin Stevens of Tennessee found a way to reach out to strippers.  Her foot in the door is to feed them a catered dinner twice a month, and give them Mary Kay Cosmetics gift sets and then slip her phone number into their hands.  One former stripper said she felt like “Maybe Jesus would have hung out with me.”
In a USA Today article, former strippers explained that they came to understand that Christians were not their enemies.  And Stevens had felt God telling her that “Strippers are not your enemy, they're your mission field.” Before beginning three years ago, she fasted and prayed for 21 days fasting.
Stevens sought counsel from the national Strip Church ministry group and started calling club managers. When she was interviewed by USA Today, 3 strippers had left their degrading work behind.  Stevens has co-authored the book How to Pick up a Stripper and Other Acts of Kindness: Serving People Just as They Are about her experience.
One of the women that Stevens helped out of the stripping business, Katherine Holland, has gotten her associates degree in criminal justice and instead of stripping, is leading a Bible study group about practical ways to love your enemy.

Showing up at Sextravaganza
Around 10 years ago, Gerri Laird received a call from Grace Harris, a senior at George Mason University in Virginia.  The school was planning a “Sextravaganza” day with all the usual degrading displays promoting sex for recreation, abortion, and then offering testing for sexually transmitted diseases after all the fun.
Grace received permission from the college to set up an educational booth promoting the positive aspects of chastity and marriage.  She also wanted to include a display of the developmental stages of unborn babies.  Although there was initially some hesitancy, Grace successfully convinced them that she would not in any way disrupt the event. 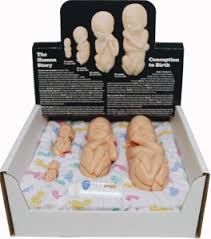 Then, Grace called Gerri who worked at the Family Life Office in Arlington, Virginia at the time, asking for brochures and to  borrow some of the soft rubber fetal models.
On the day of Sextravaganza, Gerri ventured into the auditorium to see just how Grace was faring.  Surprisingly, rather than being stuck in some dark corner, Grace’s booth was prominently located at the very center of the room. “It had the most students—around a dozen at the time—far more than any other booth,” Gerri said during and interview for this article.  “Grace had laid each baby out separately in a baby blanket,” she explained. “Guys would pick and hold the 20 week baby and girls would take it and show them how to do it.”  Gerry said she heard only positive comments such as students saying:   “I didn’t know babies were this developed at that stage.”  She learned from Grace that it had been like that throughout the day, with small crowds gathering and even a few faculty members.
After the event, Grace told Gerri that many people she knew approached her on campus, thanking her for being there. “All the comments she received were positive,” Gerri said.
Grace had avoided anything political and only had promoted the truth about the beauty of marriage and chastity with posters, brochures and the baby models. “That’s the beauty of the truth,” Gerri said.  “Our church definitely has that right so we can stand on the truth.  We have a lot to offer.”
These three brief stories are simply small examples of ways people have brought God’s love and truth to others.  As Christians, we are expected to shine our light and to love our neighbors as ourselves.
Dear God, show us the ways in which you want us to spread your Gospel message to others.  Help us to be open to your plan for us and give us the grace and understanding to follow it.