On the Pennsylvania Turnpike, stranded behind miles of traffic, the students, teachers, and chaperone’s from the Bismarck diocese’s Catholic schools did what Catholics do when they get stranded in historical blizzards—pray. And in this case, while stuck in the eye of Winter Storm Jonas, they also sang Irish songs and attended Mass around a snow altar. 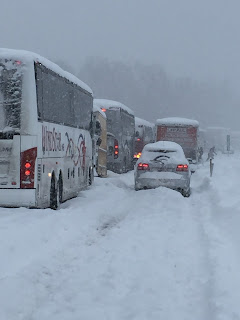 The buses left North Dakota for a 26-hour drive to the March for Life in Washington, D.C. to celebrate life and protest 43 years of legalized abortion.  But forecasters warned of an epic blizzard expected to dump over 2-3 feet of snow in the East with D.C. sitting right in the epicenter.  The North Dakota buses with students from 4 high schools and the University of Mary left immediately after the march rather than spending the night in a hotel as originally planned.
Loaded with granola bars, animal crackers, waters, and rosaries, Suzanne Windsor, a chaperone for St. Mary’s High school in Bismarck explained in a phone interview (with "The Irish Rover" being sung in the background) that this is all part of their pilgrimage. “We’ve been saying rosaries and chaplets of mercy, singing, and watching movies,” she said about the way they spent their Saturday.  At that point, their bus had been stranded for 16 hours.
A jackknifed truck eastbound at the Allegheny Tunnel was to blame for stranding motorists for eighty miles.  “First the jackknifed truck had to be cleared,” Suzanne explained, “and then they had to start clearing around 5 miles of traffic.”  Some cars ran out of fuel and others became stuck in snowdrifts and blocked the 2-lane road.
In spite of the unfortunate circumstances, Windsor said that spirits were upbeat. “I’m on the junior bus,” she explained. "The seniors have a nicer bus and they are coming by and charging our phones for us.  Our kids are at peace and I’ve not heard any complaints.
“Fr. Josh Waltz reminded us that our pilgrimage is not over, so we are offering up everything for life,” she said.
Msgr. Shea, president of the University of Mary, and Katherine Jean Lopez, columnist and editor-at-large for the National Review Online, were scheduled to fly out of D.C. after the march, but they hopped on the UMary bus when all fights were cancelled.  The two of them walked up and down the highway visiting the North Dakota buses spreading cheer.  Shea came by a second time and rallied everyone to join him in singing a few of his favorite Irish songs.

Fr. Thomas Grafsgaard, associate pastor of St. Wenceslaus in Dickinson, and chaplain for Trinity High School, concelebrated Mass with 6 other priests from various dioceses while their bus was stranded.  In a phone interview, he explained that students were going from bus to bus asking for priests to say Mass.  "We [the 7 priests] piled our goods together,” Grafsgaard said.  “I had wine, other groups had the hosts.  We broke them into very small pieces and announced ahead of time that there wouldn’t be enough for everyone to go to Communion.”  He estimated there to be around 500 or more people who attended. 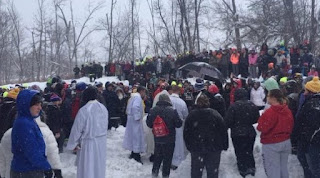 There were even musicians, playing guitar and someone used a bucket as a drum. "People were walking from both directions coming to join us," he said.  During Mass, he said it was remarkable how attentive everyone was. “I’m sure they were getting cold, but everyone was very reverent," Grafsgaard said. "It was a snow altar but they knew the importance and why they were there.”

Shortly after the interview with Windsor, the road was cleared for the St. Mary busses.  The Dickinson bus was around a mile behind them.  Unfortunately, before Dickinson had a chance to get out, another accident delayed them for two more hours.  By Saturday evening, however, all the North Dakota buses had gotten out. Windsor and Grafsgaard both reported that high school bus passengers were safe and sound, enjoying hot meals, showers, and soft beds at a hotel for the night.  The U-Mary bus opted to continue to drive through.  God speed everyone!