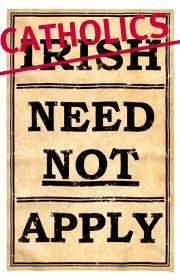 The past can haunt.  In the case of Katrina Pierson, spokeswoman for Donald Trump, social media can bite back 5 years later. That is when she made her anti-Catholic tweet: “Just saw a commercial from Catholic Church stating that Catholic Church was started by Jesus. I bet they believe that too. #sad”


Katrina must be wondering what happened on January 23, when suddenly there were over 200 replies to a tweet she had made in 2011. Or maybe she doesn’t care since she’s known for making controversial, abrasive remarks, sort of like….uh, what’s his name? 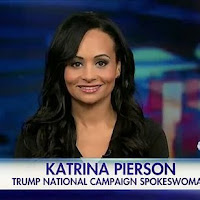 Life is strange, so they say, but perhaps they say it because there are some strange people among us. Someone took the time to go through her 36k tweets, came across an anti-Catholic one from 2011, and spread it on Facebook. Politics, no doubt.  It resulted in over 200 replies from Catholics defending their faith. (Perhaps I seem strange for counting them all, but occasional strangeness is a career hazard for reporters.)
Not until after I had responded to the tweet forwarded to me by the Catholic Book Lady, did I realize it was posted so long ago. What followed, however, was a show of Catholic outrage, evangelization, and instruction. Some were probably like me, not noticing the original posting date. It’s likely many didn’t even know who she was, but all could not let an ignorant anti-Catholic jab go. 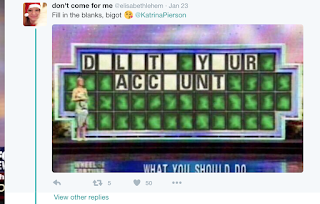 A few anti-Catholic’s sneaked into the tweetfest, and there was a bit of name calling, (bigot a few times) but by and large, Catholics tweeted as a positive and unified force. Katrina’s remark was incendiary and far-reaching so I appreciate how well so many responded with 140 letters or less.
A Few of my Favorites
“As a church historian, I’d be glad to explain in detail why this is such a colossally offensive and ignorant comment.”
“I hate to break it to you, but the record of history is pretty clear—The Catholic Church dates back to Jesus & the apostles”.
“Indeed we do.”
“That’s because it was. Your lack of Biblical and Historical knowledge when speaking of the 1st Christian is what’s #sad”
“History tip:  Catholic Church was the only Christian church for 1500 years until the Reformation. Yes, still the original.”
“Please continue. Lots of Catholics still don’t get that you are the WASP Bigot ticket. Help open their eyes.”
“Obviously you don’t know history, Catholicism was the only form of Christianity way b4 the reformation.” 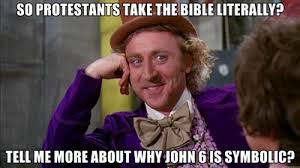 “The 1st protestant sect did not exist until over 1,500 years AFTER the ascension of Jesus.”
“Well, obviously it’s true.  It’s in the Bible.”

This exercise in tweeting was a reminder that I'm rubber and you're glue. Whatever you say bounces off of me and sticks to you.  Sorry,  just something that came to me from my childhood.  So,  at any rate,  onward Christian soldiers!  That reminds me of something else from my past--a question I was asked once: “Do Catholics consider themselves Christian?”  Katrina is not alone, as we all know. Confusion about us abounds.  So may the grace of Jesus Christ, our leader,  be with us as we seek to shine the truth of our faith to the world with the light of his love.
###