Threat of Biden According to Archbishop Sheen 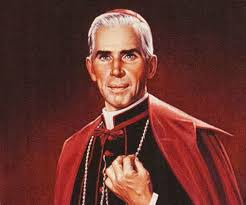 The threat against religious
liberty that Joe Biden brings to
his run for the Whitehouse was
addressed by the Venerable Archbishop Fulton Sheen in 1947 in his  book, Characters of
the  Passion.
For all the accusations that Christian and Catholic teaching is dangerous to our free society, Sheen pointed out that the reality is quite the contrary.“It was Jesus Christ who suffered under Pontius Pilate; it was not Pontius Pilate who suffered under Jesus Christ.  The grave danger today is not religion in politics but politics in religion.”

The Church teaches that the state is supreme in temporal matters.  But when politics make religious proclamations such as women have the right to end the life of their unborn babies – politics enters into the religious realm and claims supremacy over the human soul.

“But whatever be the reason for these trying days, of this we may be certain:  The Christ Who suffered under Pontius Pilate signed Pilate’s death warrant; it was not Pilate who signed Christ’s.  Christ’s Church will be attacked, scorned, and ridiculed, but it will never be destroyed…. The bold fact the enemies of God must face is that modern civilization has conquered the world, but in doing so has lost its soul…. And as religion fades so will freedom, for only where the spirit of God is, is there liberty.”

5 Things Every Catholic needs to know about Biden

Fr. Edward Meek's homily at Christ the King Church in Townson, MD explained the five things every Catholic should know about Biden. He directly hit on them starting at the 8-minute mark and ends with the words of Venerable Archbishop Sheen. Recognizing his message might be controversial, he began with, "Woe is me if I don't preach the truth." Here are excerpts.

1.    Joe Biden is unabashedly pro-abortion. It is clear from his voting record, party platform and support of NARAL and Planned Parenthood. He even opposed legislation for doctors who supply care for babies who survive abortion. He is also pushing for repeal of the Hyde Amendment which would require everyone to pay for abortion.

2.     Joe Biden opposes the sanctity of marriage. As Vice President, he publicly endorses same-sex marriage. He married a same-sex couple at his house and posted a picture.

3.     He and his party advocate for the repeal of the Religious Freedom Restoration Act which respects the rights of medical workers who decline participating in abortions and in Church-based adoptions that choose to place babies with only married heterosexual couples.

4.     He would open the door for America to quickly become a socialist country. He signed onto Bernie Sanders’ agenda. Running mate Kamala Harris is identified as the most leftist member of the senate.

We only have to study the history of socialism to see it has viewed the Catholic Church as an enemy to be destroyed or silenced and marginalized . Socialism is a soul robbing ideology that inevitably always leads to totalitarianism where the government presumes to put itself in the place of God in the lives of its subservient citizens.

Socialism has been denounced by eleven popes since 1839.  Mob rule is one of the tactics of socialism. The same mobs that charged, “silence is violence” benefited from Joe Biden’s silence.

5.      He has given rise to the misinformed effort known as Catholics for Biden.  He is pictured posing  and smiling with nuns in effort to portray himself as a good Catholic.  Yet, he targets the Little Sisters of the poor. His running mate called the Knights of Columbus an all-male extremist group because of the knights clear support of Catholic teaching on the non-negotiables.

Calling Biden a practicing Catholic confuses many in our society—Oh I guess it’s not that bad. The willful destruction of 62 million babies in the womb including  21 million Black babies is not that bad? What could be worse?

In the “Living the Gospel of Life” document, the bishops called abortion the preeminent issue.  The Declaration of Independence lists the right to life first.

Abortion, spiritually  speaking, is the primary cause and the primary symptom of a society’s  downward death spiral. It’s time for faithful Catholics to stand up and say: Enough is enough!

I believe we are staring into the abyss stemming from our culture’s wholesale rejection of God and his law, a rejection manifested most tangibility  in five  decades of legalized abortion

Archbishop Fulton Sheen wrote these words: 60 years ago:  “A national always gets the kind of politicians it deserves. If a time ever comes when the religious Jews, protestants and Catholics ever have to suffer under a totalitarian state which would deny them the right to worship God to the light of their conscience, it will be because for years, they thought it made no difference what kind of people represented them and because they abandoned the spiritual for the realm of the temporal.”