My Message from Heaven to Stay Awake and Pray the Rosary

I learned to pray the rosary in 1989 while in my early thirties. I vowed to say it daily. But a few weeks after the birth of a new baby, I decided to skip it in favor of getting to sleep. That’s when a Divine message let me know, it's worth staying awake to pray the rosary.

When I was around ten years old, my parents decided to pray a family rosary one evening. It was the first time ever.  We knelt together in the living room and began. But before finishing the first decade, things began to break down.  I don’t recall the specifics but making faces and giggling were involved.  My mother declared it a failure, and we never prayed one again during my childhood, although years later my parents became very devoted to it.

Many years later, when I was the mother with three young boys and expecting a fourth, I read a book about Marian apparitions and realized that the Blessed Mother has asked us to pray the rosary daily. I wanted to do it, but I did not know how. I knew that the Our Father’s were prayed on the big beads and Hail Mary’s on the little ones, but I was totally ignorant of the opening and closing prayers and mysteries. Regardless, I went ahead using just the two prayers until I soon obtained a little booklet on how to pray the rosary. Then, every day, I prayed it.
But in the spring of 1990, I felt I had good reason to skip it--it was late and I could not stay awake.  Our fourth son, Jacob, was just a couple months old.  My husband Mark got up for work at 4:30 in the morning, so he was sleeping in another room on weekday nights during this time.  One night, after nursing Jacob and getting him to sleep in his crib, I returned to bed. Totally exhausted, I thought to myself, “I am so tired. There is no way I can stay awake to pray a rosary.”
At that very moment, I heard a book fall from the bookshelf on the headboard onto the bed.  I had been lying facing the other way.  Before turning to look, I thought to myself, “Watch it be the Bible and I’ll end up feeling guilty for not praying the rosary.”   Instead, it was the very book with the Blessed Mother’s picture on the cover that had originally inspired me to pray the rosary.  “Wow,” I thought, “that’s sure a big coincidence.”
I put the book back on the shelf and found the energy to pray a rosary before going to sleep.  The next day, I told Mark and the older boys, ages seven and five, what had happened.  “That was quite a coincidence, wasn’t it?” I said.
A few days later, it was the same scenario: I had not prayed my rosary yet and it was late.   Jacob took an especially long time to get to sleep, and I was unbearably tired. I got into bed and thought: “There is no possible way I can stay up to say a rosary.”  At that very moment, I saw with my own eyes, the same book tumble out from the bookshelf onto the bed.  It again landed with the Blessed Mother’s picture face up.
I held my breath in awe. I was not even moving when the book fell.  It was no coincidence that both times, at the exact moment I decided not to pray the rosary,  the book that inspired me to pray it had fallen off the shelf with the Blessed Mother’s picture face up.  God knew my thoughts. And he knew how to get my attention.
Before beginning my rosary, knowing that I would tell Mark and the boys the story the next day, I did a little experiment.  I took the book and placed it hanging off the shelf. Then, I moved the headboard back and forth. The shelf slid back and forth on the headboard, but the book stayed in place and did not fall out.  Remember, I had been lying still both times when the book had fallen.
“Why do you think that happened,” five-year-old Luke asked me the next morning.
“In the Bible it says that the night before Jesus died on the cross, he asked his apostles to stay up and pray with him,” I answered.  “I believe that God was asking me not to go to sleep but to stay up and pray my rosary. I think it is so powerful that God does not want me to skip it.”

Why Pray the Rosary?
So many Catholics do not understand the power of the rosary.  It is a meditation on Christ’s life, with the Apostle’s Creed, Our Father's, Hail Mary's, Glory Be's, and Hail Holy Queen to close.
“Why do you pray to Mary?” is a common attack against the rosary.   We ask for her intercession. When she interceded at the Wedding at Cana, Jesus performed his first miracle. Shouldn't we follow the Bible?  Jesus went through Mary to come to us and we go through her to go to her son, our intercessor to God the Father.
“But why so many Hail Mary’s if you are praying to God?” is another common question.
The Hail Mary is a Jesus-centered prayer.  “Hail Mary, full of grace, the Lord is with you.”  The Lord is Jesus.  “Blessed are you among women and blessed is the fruit of thy womb, Jesus.” There is Jesus again and Scripture says all generations will call Mary blessed.
“Holy Mary, mother of God,” Jesus is God. “Pray for us sinners, now and at the hour of our death, amen.”  Asking the mother of Jesus to pray for us is a good and holy thing—something well worth staying up to do. 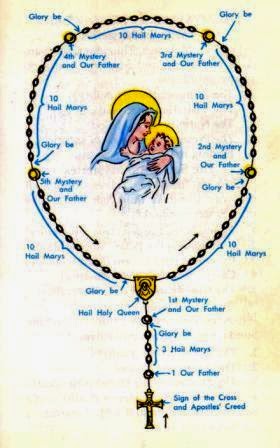