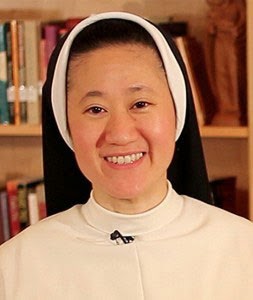 The story of Dominican Sister Jane Dominic Laurel of Nashville, TN has gone viral.  Secular news organizations that did not see fit to report on the trial of Dr. Gosnell’s abortion house of horrors are grabbing this one; thereby proving Lesson #1: News is in the eye of the beholder—or rather in the politics of the beholder.

To recap, Sr. Laurel had presented her talk on "Masculinity and Femininity: Difference and Gift," at Charlotte Catholic High School.  She has a doctorate in sacred theology from the Pontifical University of St. Thomas Aquinas in Rome. Her presentation was based on a series of instructional videos created for Aquinas College in Nashville where she is an associate professor.  Sr. Laurel was previously well received at the school. This time, however, comments on the causes and dangers of homosexuality caused  a huge uproar.

The school responded by holding a parents meeting last Wednesday with diocesan leaders.  An estimated 900 parents attended. According to the Catholic News Herald (the only media outlet reportedly allowed inside the gathering) emotions boiled over. Booing and yelling at priests and any who defended them was rampant.  Lesson #2: Dialogue is not the goal. Control over the Catholic agenda is.
Since everything is hearsay and there was no recording, I cannot defend or attack the particulars of Sr. Laurel’s talk.  But the whole debacle underlines Lesson #3: The media is in the back pocket of the pro-homosexual movement.  They are bloodhounds and will catch the scent of any public event or speaker not cordial to their agenda.
There are real people living on the wrong side of Catholic teaching so certainly, their feelings must be taken into consideration. Jesus was loving but firm, telling those he healed to sin no more.  He was not soft on sin but his mercy and love ran deep.  Sure we should tread lightly but Catholics teaching will not go away.  It seems to be mob rule. Except it’s not.  Lesson #5: No amount of tantrums will change Catholic teaching.
Where is all the anger is coming from and do these same people get as heated up about the fact that over 56 million babies have been aborted since Roe v. Wade?  Did I just change the subject?  No, it is the subject—morality and which issues people are passionate about.
The PC police have an iron fist these days and these are their rules:
*    Go ahead and attack Catholics, especially if you are Catholic.
*    Abort but don’t you dare show us the pictures.
*    Expecting chastity makes you an idiot.
*    Don’t deny me my birth control—as a matter of fact, pay for it.
*    Don’t dare say anything negative about two members of the same sex having a sexual relationship. Otherwise, expect revenge.
Was too much graphic information given in Sr. Laurel’s talk?  Were the statements scientifically questionable?  That would be wrong, but does it rise to the level of emotional explosion at Charlotte Catholic High school?
Consider the reports from the Catholic News Herald.
Father Matthew Kauth, the school's chaplain arranged for the assembly. One parent told him: "I have lost confidence. I do not trust your judgment and I do not respect you (Father Kauth)." Her comments drew loud applause from many others.
Chaplain, Father Kauth, as well as Father Roger Arnsparger, diocesan vicar of education, and Charlotte Catholic's dean of students and two assistant principals made apologies for any harm and taking people off guard, acknowledging that some of the talk should not have been given while still confirming Catholic teaching on issues of human sexuality. Bishop Peter Jugis was presiding at a church dedication but sent a statement pleading for respectful conversation and to be “united in the one faith and in the love of Almighty God."
But many parents were in no mood for respect. Over two hours of angry comments and even booing down priests ensued. “Two observers called the meeting's climate ‘disrespectful’ and ‘hate-filled.’”
“In his remarks, Fr. Kauth said he brought Sr. Laurel to the school because he felt students at Charlotte Catholic had been poorly catechized and were suffering from spiritual darkness, particularly around the issue of sexuality.”
One parent told Father Kauth, "You have divided parents, you have divided students, and we’ve lost respect for you."
A parent who said she was representing homosexual and bisexual students at Charlotte Catholic said Sister Jane "pounded home the message" that if these students are questioning their sexual identity, they had better stay in the closet. She also said she felt the presentation created nothing but an unsafe environment for these students at the school.
Some parents tried coming to Father Kauth’s defense but were shouted down by other people. Several parents thanked Father Kauth profusely for the positive impacts his ministry has had on their children, who are students at the school. "I trust the administration here and it has brought very good and energetic talk into our household," one parent said, but they were booed.
Another parent told Father Kauth, "You don’t know best for our children. What are you planning on doing for the healing? We want our children to remain Catholic, but we are being pushed away by the climate of what is going on here."
The school administrators said the feedback from the meeting would provide insight for considering any beneficial changes in current practices.  “We recognize and value the love, care and concern our students have for each other as has been made evident the last couple of weeks."
Sr. Laurel is taking a sabbatical from teaching and her other speaking engagements have been cancelled.  Sr. Mary Sarah Galbraith, the president of Aquinas College where Sr. Laurel teaches, issued a statement about the whole ordeal.  Although previously popular speaker Sr. Laurel will not be on the speaker’s circuit any time soon. Lesson #6 In spiritual warfare, expect to take shots.
-___________________________________________________________________________________________
Posted by Patti Maguire Armstrong