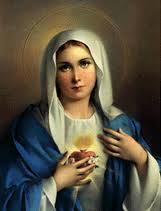 150 parents and students consecrated themselves to the Blessed Mother on the feast of the Immaculate Conception.
While Fr. Joshua Waltz prepared his homily for the All Saint’s Day Mass at St. Mary’s High School in Bismarck, ND, he recalled a phone call from his brother Fr. Justin. “Don’t forget, if you plan to make the Total Consecration to Mary with me on the Feast of the Immaculate Conception, (December 8) the preparation starts on November 5.”

This would be Fr. Josh’s sixth time doing the thirty-three-day devotion that ends in consecration to Mary, thus giving permission for her to form, discipline, and mold him into a true follower of Christ.
The Total Consecration to Mary was originally introduced by the French, Saint Louis de Montfort during the early 18th century as a formal act of consecration to Mary, so through her, one is consecrated to Christ.  He taught that the goal is holiness through the gradual sanctification of the soul by turning away from self-love towards the love of God through Mary. St. Louis composed a spiritual formula of prayers, Scripture, and spiritual exercises. 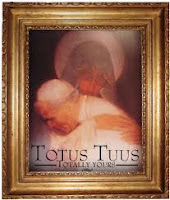 Fr. Josh said the devotion first caught his attention when he read that Pope John Paul II said that making the Total Consecration had changed his life. “His Latin motto was, ‘Totus Tuus,’ which in Latin means, ‘All Yours,’ “ said Fr. Josh.  “That was St. Louis de Montfort’s motto.” It is an abbreviation of a more complete form of entrustment to the Mother of God.
Thinking of his plan to begin the devotion with his brother, Fr. Josh said there was a sudden voice telling him to invite his students and their parents to join him.  During his homily, Fr. Josh explained, “It’s a way to come to a greater love of Jesus through the heart of Mary.  She helped form the heart of Jesus; she taught him to love and pray.  We can go to Mary and ask her to form our heart.” He said further that Jesus came to the world through Mary and he comes to us in our hearts through her. “Throughout Scripture, Mary is constantly forming us for Jesus. At Cana, the problem was brought to her and she immediately took it to Jesus.” 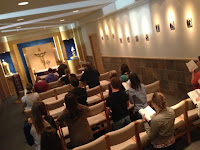 Those who wanted to make the Total Consecration were told to text Fr. Josh’s phone with the message, “I’m in.”  He would get everyone a copy of the book Total Consecration to Jesus Through Mary According to St. Louis De Montfort by Fr. Hugh Gillespie. It contains the three-part devotion: emptying yourself of the spirit of the world, experiencing the heart of Mary and coming to know her, and the last week is spent coming to know the heart of Christ.”  People could participate in the daily devotion on their own, or pray together with others at St. Mary’s chapel during lunch or right after school. 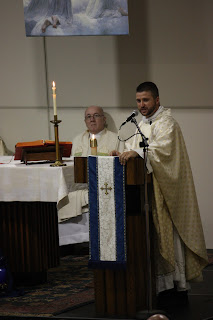 “High school kids are always up for a challenge,” Fr. Josh said in an interview, “So I thought maybe as many as thirty or forty would sign up.”  Instead, he was happily overwhelmed to receive texts from100 students and then another 50 from parents.
Fr. Josh ordered books the next day—Friday--and needed them shipped right away to begin on Monday.  Next-day shipping would not have been a problem for Montfort Publications in New York, except for the fact that they had just been hit by Hurricane Sandy and were without power.
Edith Matlock, Operations Manager for Montfort, took Fr. Josh’s call. “We were completely down, but he needed the books right away,” she said. “The only way to do that was overnight them with UPS but their automated system was down.” Edith understood the urgency. She said a prayer and asked for Mary’s help. “I was able to get ahold of a UPS driver and we did everything manually, even the labels. We understood how important it was.” The books arrived the morning of November 5, just in time to begin that day over the lunch break.
Fr. Josh said that even though he’s already completed this devotion five times, each time is personally challenging. “Sometimes I sit down and realize I need to take God more serious. He was not messing around when he told us to be perfect.  Too often we put it on cruise control. Total Consecration is a jump start to holiness through Mary.”
Anna Loomis, a senior at St. Mary’s, said she was interested right away. “ I liked the idea of making a lifestyle choice to grow closer to God,” she said. “It takes a commitment because you can’t miss a day but it’s putting the focus on something greater than yourself.” 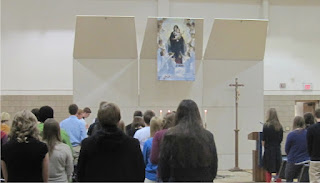 Hunter Puetz, a junior, said he thought it was great idea so he texted Fr. Josh immediately after Mass. He learned that his Dad, Matt, was so enthusiastic that he had texted before the homily was even over. “We are sharing the same book and often talk about it,” Hunter explained. “I did not pray much to Mary before this, except to say a Hail Mary one in awhile,” he said.  “I am learning a lot about taking my problems to Mary.  She is the most perfect women and she sacrificed a lot for her son Jesus and for the Church, so I know I can look up to her and trust her.”  Hunter added that not only is he growing closer to Jesus and Mary but to his Dad too as they make this devotion together.
Julie Schaffner is another parent who signed up. “I thought that preparing for Advent was a perfect time to become closer to Mary and better understand her role in Jesus’s life,” she said.  It was not until the weekend that Julie discovered that her daughter Katelyn, a junior, was also going to make the Total Consecration.
“It’s touching and reassuring to be doing this together,” she said.  “It’s not as time consuming as I had thought it would be—ten to thirty minutes-- depending on which part of the book you are at and if you say a rosary every day.
On the feast of the Immaculate Conception, Julie and her husband John were in Grand Forks for a wrestling tournament.  “Our son, Steven who attends UND, asked if I wanted to attend the 12:10 Mass with him because St. Michael’s was having a special celebration after Mass for those (around 100) that completed the 33-day Total Consecration devotion.”
They learned that he also had been doing the 33-day devotional also in Grand Forks!  “It was an amazing experience,” Julie said, “Steven and me attending Mass and committing ourselves together, while Katelyn was attending in Bismarck.”
Julie said that participating in this devotion has impacted her life. “It has enlightened me that I should be filling myself with the spirit of Jesus Christ rather than the spirit of the world.”
###
For more information about the True Devotion to Mary and Total Consecration, Lighthouse Catholic Media offers a CD by Fr. Lance Harlow available online at Lighthouse Catholic Media

For a guide to follow online, go here: Total Consecration

Books on this devotion are:
33 Days to Morning Glory  by Fr. Michael E. Gaitley MIC.  Introduction of the role of consecration in the lives of several important leaders and teachers of the Church.
True Devotion to Mary by St. Louis De Montfort. This reveals the depths of St. Louis's spiritual devotion to Mary which the Total Consecration is based.
Total Consecration to Jesus Through Mary According to St. Louis De Montfort, by Fr. Hugh Gillespie. A new book that provides a clear presentation of St. Louis's spirituality.