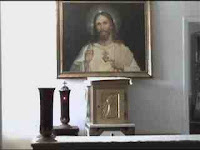 If a picture is worth a thousand words, what do you suppose a video image is worth? What about a video image of our Lord Jesus Christ in the Blessed Sacrament?

I oversee our religious community’s web site. I had the idea to provide a live image of our Eucharistic Adoration chapel which is uploaded every minute 24 hours a day, 7 days a week so the web cam can bring Jesus closer to people through their computers. I quickly learned that this image was indeed worth much more than a thousand words.

I have received emails from homebound people who praise the web cam as a great comfort when they cannot get to Church. People with insomnia have written to say they use it during long nights when sleep eludes them. Others use it as a home oratory where the family can gather in prayer. One
psychiatrist uses it to pray with her patients during treatment. 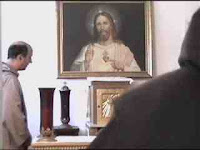 This feedback confirmed to me that the web cam was the next best thing to being there. But there was one use that I never could have imagined--a game. Since some of our monks occasionally pass in front of the camera for a moment, a group of office workers turned this cyber image into the Spot the Monk game.

A non-Catholic named Richard wrote to tell me about it: “Brother John, in my quest to see a monk on your monk-cam, I have set up a web ring of a few friends of mind to watch the monk-cam at most hours of the day. This is the exciting part: Sarah saw a monk! I was not fortunate enough to lay eyes on him, but I know you guys are out there!  Thank you for putting your web cam up. We love it!"

I must admit, I never envisioned the Spot the Monk game, but neither did I envision what followed. Because of this game, Richard started reading articles on our web site. In his next email to me, he wanted information about becoming Catholic.  I directed him to a Catholic parish and sent him the Catechism of the Catholic Church. Richard eventually was received into the Catholic Church. Now, he tries to attend adoration daily at his local parish.

Little did Richard realize that by looking for a monk, he would find Jesus.
Now that’s a game worth playing.
###

This story was originally published in Amazing Grace for the Catholic Heart
Note: the Monks of Adoration no longer have a live webcam but you can find one at: Savior.org