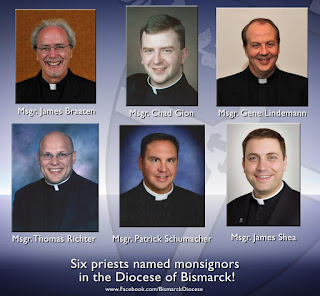 The Diocese of Bismarck, ND leaped from only one monsignor to seven this week, when six priests were given the title of monsignor, joining Msgr. Gerald Wash. Pope Benedict XV bestowed the honor at the request of Bishop David D. Kagan, D.D., P.A., and J.C.L. on five pastors and the president of University of Mary.

The new monsignors are:
·       Fr. James Braaten, episcopal vicar for the Diocese of Bismarck and pastor of the Church of the Ascension in Bismarck;  Fr. Chad Gion, pastor of the Church of Spirit of Life in Mandan, Church of St. Anthony in St. Anthony and Church of St. Martin in Huff; Fr. Gene Lindemann, J.C.L., vicar general for the Diocese of Bismarck and pastor of the Church of St. Mary in Bismarck; Fr. Thomas Richter, vocation director and vicar for deacons in the Diocese of Bismarck, as well as rector of the Cathedral of the Holy Spirit in Bismarck; Fr. Patrick Schumacher, director of continuing education for clergy in the Diocese of Bismarck and pastor of the Church of St. Wenceslaus in Dickinson; Fr. James Shea, president of the University of Mary in Bismarck.
This is the first time Diocese of Bismarck has named a monsignor since Dec. 1991. It is not an office, but rather a title of honor.  The honor is given at three ranks in descending order.  The first is Chaplain of His Holiness.  Fr. James Braaten, Fr. Chad Gion, Fr. Thomas Richter, Fr. Patrick Schumacher, and Fr. James Shea are all now Chaplains.
The second grade is Prelate of Honor, which is the title that has been given to Fr. Gene Lindemann.  The third and most prestigious grade is Protonotary Apostolic, a title held by Bismarck Bishop David Kagan.
“This is truly an honor, not just for these six good priests, but it is one more recognition of the exemplary life and priestly zeal all of our priests in the diocese live and exercise daily,” Bishop Kagan said.  “Please join me in thanking Almighty God for the great gift he has bestowed on our diocese of the sacred priesthood.  Please pray for these six good priests and for all of our priests who serve us all so faithfully and zealously every day.”
Fr. Shea’s appointment was announced officially to students at the University of Mary at on Friday morning.  A letter from the bishop was read after Masses this weekend in the churches of the other five priests.
“You’ve heard of Wiki-leaks,” Father Nick Schneider, Associate Pastor of Cathedral of the Holy Spirit began, “Well, through Bismarck-leaks, you likely have already heard the news that our pastor has been made a monsignor.”  He proceeded to read a letter from Bishop Kagan announcing that Fr. Thomas Richter is now a Monsignor designated by Pope Benedict XVI.
"After enthusiastic applause, Msgr. Richter announced, “If you are ever wondering if the Holy Father is merciful or not, now you know.” He said it would be a gift he and his congregation would get used to together. “This is a way of the Bishop honoring the parish,” Msgr. Richter said.  “Much of this is because I’m a rector here not because of my person. It is a way for the Bishop to tell us how important he feels the Cathedral is, so I hope you feel honored as a parish.”
He added that while parishioners were feeling honored, it was noteworthy that two of our seminarians--Jordon Dosh and Douglas Krebbs-- will be serving for the Holy Father in Rome at St. Peter’s Basilica at Christmas midnight Mass. “We are the only parish in the entire world that has serving two of it’s own at midnight Mass,” he said, “and I trust you are honored by this.”
Later, amid a flurry of congratulatory hugs and handshakes, the ever-jovial Msgr. Richter told some of his well-wishers,  “I get to wear different vestments and when I am in Rome, and process up with the Pope during Mass celebrations.” Then he added with a chuckle, “The best part is that I have the honor of the title with no extra duties or responsibilities.”
###
To see video of the announcement at Cathedral and Msgr. Richter's comments go to: