Mary and The Moslems

At times, it seems that Moslems and Christians have no common ground. Yet, there is one who can bring us together--Mary, our Blessed Mother. Mary is greatly loved by both Muslims and Catholics. There are differences in our devotions to her, but Bishop Fulton Sheen once stated that he believed it would be through Mary that one day the Moslems would convert to Christianity. It is perhaps through Our Lady of Fatima that this hope is most likely.

The Virgin Mary plays a very significant role in Islam. They do not believe as we do, that Mary is the Mother of God through her motherhood of Jesus, but they share many Catholic teachings.  Mary’s name appears more times in the Koran than in the New Testament. Of the Koran’s 114 chapters, Mary is among the eight people who have a chapter named after them. The nineteenth chapter is named “Mariam” which means Mary in Arabic.
Mary is considered ever-virgin and the only woman mentioned by name in the Koran. Muslims believe that she is without sin. The Hadith—book of Islamic tradition—teaches that there are only two that Satan never touched at birth--Jesus and Mary. The Koran contains verses on the Annunciation, Visitation, and Nativity. Fatima, the daughter of Mohammed, was also revered by him. But after her death Mohammed wrote: "Thou shalt be the most blessed of all women in Paradise, after Mary."
Shared Devotion
While other Christian religions either totally ignore or minimize Mary’s role in salvation, Catholics and Moslems share a great love and reverence for the mother of our Lord, Jesus Christ.  The fact that Mary appeared at Fatima, Portugal, a Catholic town bearing this revered Muslim name, (named for a Muslim princess) is a great sign for our times.
Fatima, Portugal draws millions of Moslem and Catholic pilgrims every year.  It is the Blessed Mother who calls them and it is her message that can do the seemingly impossible; heal this world and bring peace. Ultimately, it is God’s plan for as always, Mary wishes for us to,  “Do whatever he tells you.” (John 2:5)

The town of Fatima is in central Portugal. The Apostle James evangelized Portugal in the early centuries.  Historical records show that at least since 656 A.D., the nation of Portugal has had a devotion to Mary under the title of the Immaculate Conception. Portugal was invaded by the Moors (Moslems) in 711.  Under King Alfonso Henriques (1128-1185) Portugal gained her independence. As King, he placed Portugal under the protection of Mary, naming her “Protectress and Mother of all the Portuguese.” Afterwards, Mary’s queenship was proclaimed by a succession of kings.
Events at Fatima
Portugal’s long history of devotion to the Blessed Mother reveals it as an especially appropriate place for her visitations.  Here is a review of the events, keeping in mind that the Catholic Church is very slow and conservative about approving any claim of apparitions. No one is required to believe in an apparition as a requirement of the Catholic faith. However, it’s reasonable to judge apparitions worthy of belief after Church authority has investigated and accepted them. Miracles and conversions often result through these apparitions and many sites have been visited by hundreds of thousands of pilgrims such as Fatima, Portugal
On May 13, 1917, three young children were tending a flock of sheep in a field in the outskirts of Fatima. The children were Lucia of Jesus, 10, Francisco Marto, 9, and his sister Jacinta, 7. (Francisco and Jacinta were beatified May 13, 2000 and the case for beatification has opened for Sr. Lucia who died in 2005 at the age of 97.) 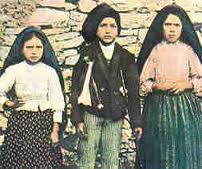 Around midday, they prayed the Rosary, as was their habit after lunch. A flash of light in the sky made them think lightening was warning of an impending storm.  Instead, there was another flash and then a beautiful Lady appeared, brighter than the sun and holding a rosary. She explained to the children: “I am the Lady of the Rosary” and told them to pray, do penance, and to make sacrifices to save sinners.  She invited the children to return to the Cove of Iria during the next five consecutive months on the thirteenth at the very same hour.
As word of the children’s visions spread, thousands began to flock to Fatima in the ensuing months. In the last apparition on October 13, Our Lady had promised a miracle so that all would believe. A crowd estimated at 70,000—including many newspaper reporters and skeptics--came from all over in the pouring rain to the Cova da Iria. What took place became known as "Miracle of the Sun". It had rained all day until the appointed time. Then, the steady rain suddenly ceased. The sun swirled in the sky and great shafts of color flooded the entire plateau of Fatima.
After several minutes, the sun returned to its place in the sky.  At that point, people were astonished to realize that their soaked clothing and everything around them had completely dried in spite of being soaked just moments earlier. Many secular newspapers testified to these events with eyewitness reports and photographs of the great crowd.
Every time Our Lady appeared to the three shepherd children, she asked them to pray the rosary and do penance for our sins and sins throughout the world. It is a plan to reunite us in friendship with Christ and bring peace to the world.

Our Lady also told Lucia that she promised to assist at the hour of death with all the graces necessary for salvation all those who, on the first Saturday of five consecutive months, go to Confession and receive Holy Communion, recite five decades of the Rosary and keep her company for a quarter of an hour while mediating on the mysteries of the Rosary with the intention of making reparation for sins in the world.

Pope John Paul II
Years later, Pope John Paul II credited Our Lady of Fatima with saving him from the assassin’s bullet on May 13, 1981.  Before a crowd of 20,000 in St. Peter’s Square at the Vatican, a Turkish citizen, Mehmet Ali Agca, fired four bullets at the pope from about 15 feet away. 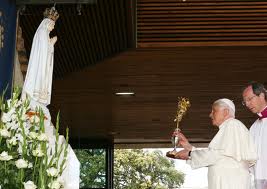 John Paul II reflected: "Agca knew how to shoot, and he certainly shot to kill. Yet it was as if someone was guiding and deflecting that bullet." That someone, John Paul believed, was the Lady of Fatima. "Could I forget that the event in St. Peter’s Square took place on the day and at the hour when (of) the first appearance of the Mother of Christ at Fatima in Portugal?  For in everything that happened to me on that very day, I felt that extraordinary motherly protection and care, which turned out to be stronger than the deadly bullet" (Memory and Identity pp. 159, 163).
During Pope John Paul II’s second visit to Fatima, he entrusted the “new evangelization” to her maternal care, giving her the title of “Our Lady of the New Evangelization.”

Fatima is a Catholic devotion yet, there is an uncanny connection to Islam.
The village of Fatima was given the Islamic name of the well-loved Moslem Princess from the nearby Castle of Ourem who stayed behind and converted to Catholicism. She was named Fatima, like many other Moslem girls in honor of Mohammad’s daughter. She was baptized in 1158 with the Christian name of Ouereana but died at an early age after marrying the Count of Ourem.
Bishop Fulton Sheen wrote of Our Lady of Fatima as the bridge between Christians and Moslems. In his 1952 book, The World’s First Love, Archbishop (then Bishop) Sheen included a chapter on “Our Lady and the Moslems.” He wrote:
“It is our belief that this [conversion] will happen not through the direct teachings of Christianity, but through a summoning of the Moslems to a veneration of the Mother of God.
“The Significance of Our Blessed Mother Mary, then, is for the Moslems the true Sayyida, or Lady. The only possible serious rival to her in their creed would be Fatima, the daughter of Mohammed himself. But after the death of Fatima, Mohammed wrote: Thou shalt be the most blessed of all the women in Paradise, after Mary. In a variant of the text, Fatima is made to say, “I surpass all the women, except Mary.”  “This brings us to our second point: namely, why the Blessed Mother, in the 20th century, should have revealed herself in the significant little village of Fatima, so that to all future generations she would be known as Our Lady of Fatima. Since nothing ever happens out of Heaven except with a finesse of all details, I believe that the Blessed Virgin chose to be known as Our Lady of Fatima as a pledge and a sign of hope to the Moslem people, and as an assurance that they, who show her so much respect, will one day accept her divine Son too.
“Evidence to support these views is found in the historical fact that the Moslems occupied Portugal for centuries. At the time when they were finally driven out, the last Moslem chief had a beautiful daughter by the name of Fatima. A Catholic boy fell in love with her, and for him she not only stayed behind when the Moslems left, but even embraced the Faith.  The young husband was so much in love with her that he changed the name of the town where he lived to Fatima. Thus, the very place where our Lady appeared in 1917 bears a historical connection to Fatima, the daughter of Mohammed.    “Mary is the advent of Christ, bringing Christ to the people before Christ Himself is born. In an apologetic endeavor, it is always best to start with that which people already accept. Because the Moslems have a devotion to Mary, our missionaries should be satisfied merely to expand and to develop that devotion, with the full realization that Our Blessed Lady will carry the Moslems the rest of the way to her divine Son. She is forever a traitor, in the sense that she will not accept any devotion for herself, but will always bring anyone who is devoted to her to her divine Son.”
At a special “Peace Congress” in Lisbon, Portugal in 1951, Archbishop Sheen made this observation: “Our Lady has been chosen to be known by the name of Fatima, which was the name of the daughter of Mohammed, because She has come not only for the conversion of Russia but also for the millions of Mohammedans...without whom there could never be true world peace.”