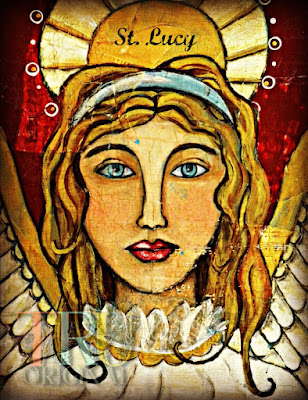 A black blob clouded Jill Metz’s vision in her right eye—a troubling development for an artist.

Metz was not one to panic, so she did nothing at first. After all, sometimes problems go away on their own. But after a couple of weeks, the black blob had not dissipated and interfered with her even reading.

This convert to the Catholic faith in 2010, is a mixed media artist, combining several mediums to create layered art. Shortly after her conversion, Metz  felt an inner nudge to create portraits of saints. But just as she was doing with the black blob, she tried to ignore the feeling, hoping it would go away.

“I had lots of doubt,” she said in an interview. “My work did not translate into portraits.”

But the following year, a friend who owns a Catholic radio station asked Metz to paint a saint for a fundraising auction. “I could not say no to that,” Metz admitted. “The only saint I really knew was Mother Mary so that’s what I planned to paint. But in prayer while I was painting her, I kept hearing in my spirit, over and over, ‘Lucy.’ Her name kept coming up.”

Not knowing who Lucy was, Metz looked her up and discovered she is a patron saint of blindness. Meanwhile, the painting did not seem to look like the Blessed Mother. “I knew it was Lucy,” Metz said. “I was so naïve that I thought saints had wings, so there are wings in the portrait. Angels did appear to St. Lucy, though.”

Metz gave the painting to her friend and around a week later the eye problem began. After two weeks with no improvement,  Metz went to an urgent care doctor. That doctor had no idea what was causing the problem but was very concerned and got her into a specialist right away. That doctor too was stumped. The plan was to begin weekly steroid shots in the affected eye, not knowing what else to do. Metz coincidentally had an appointment for a check-up with her regular optometrist in a week and a half, so she would keep that and begin treatments there.

“On the way home from the appointment, I felt a peace and God telling me, ‘Remember St. Lucy,’” Metz recalled. “It felt like she was in my life for a reason.”  When she arrived home, Mertz told her husband that the Holy Spirit was prompting her to ask St. Lucy for help with her eye.

He was a life-long Catholic but had never prayed a novena—9 days of prayer in imitation of the first novena in which the apostles and Blessed Mother prayed from Ascension Thursday to Pentecost Sunday.

They began right way asking St. Lucy to pray for healing. Within a few days, the blob changed into a perfectly shaped heart. Mertz saw it clearly when looking onto the graph paper she was given to keep track of the size of the blob.  By the time she went to her appointment on day 12, the blob was gone. Her vision was clear by then, despite never having received a single treatment.

The doctor was astounded. “What happened,” she wanted to know.

“It’s a miracle!” the doctor said.

Thus began a special friendship between Metz and the saint. “I love St. Lucy so much,” Mertz shared. “She is my girl.” It also began Metz’s openness to painting the saints.  She does this using the layered mixed media style with as many as 10-15 layers in her textured images of saints. 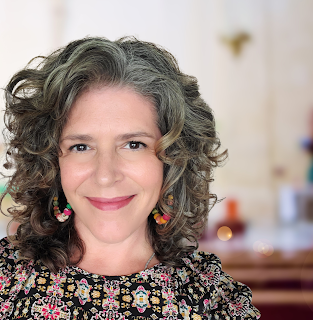 From the quiet of her country home/studio in the middle of a cornfield in Indiana, Metz begins with prayer and enters into a relationship with the saint she is painting since they spend a lot of time together. Her website: Tru Original reveals the extent of her sacred inspiration and includes a blog with personal insights.

When I enter into a time of creating with the Holy Spirit, I enter into a sacredness. I understand that it’s not from me, but I’m a conduit of creation—an empty channel allowing myself to be used by the Lord.” Sacramentals, candles blessed with an exorcism prayer, and sacred music help to create a holy mood in her studio. “I just pray—talk to our Lord—and he tells me what to do,” she said.

Sometimes there is a wrestling. Painting the rays on the portrait of St. Faustina, Metz kept hearing that they were not good enough. She later felt it was part of her own struggle accepting God’s mercy herself. “There was the healing of what she was doing in my heart. To embrace what those rays, I needed to accept them in my heart, accepting mercy,” she said.

“With every icon, the saint shares their heart like I share my heart,” she said. Her fourth icon was of St. Monica, the mother of the great doctor of the Church St. Augustine. St. Monica had prayed for his conversion for 17 years during the Fourth Century. “God goes before us and St. Monica appeared in my life at a time I needed such consolation,” she said.

When Ascension Press was searching for just the right cover for the book: What Would Monica Do? they landed on Mertz’s portrait of St. Monica. Roxane Salonen had written the book as inspiration and comfort for those carrying the cross of a loved one away from the faith. The life of St. Monica is interwoven throughout it.

Metz’s rendition matched our research of what Monica may have looked like given the characteristics of the Berber people of North Africa in the Fourth Century. Jill had no preconceived idea of what Monica looked like, but simply followed her usual ritual of prayer, opening herself up to wherever God led, and asking for the intercession of the saint.

The artist and authors are thankful that the meeting of literary and artistic creations have come together in the spirit of St. Monica and forged a special friendship between us. “It fires me up,” Jill said. “We are going to go after our children and bring down the graces of God upon them.”

St. Monica, pray for us!

For more inspiration check out my latest books: What Would Monica Do? and  Holy Hacks: Everyday Ways to Live Your Faith & Get to Heaven. Other books include:  Big Hearted: Inspiring Stories from Everyday Families and the best-selling Amazing Grace Series.