Miraculous Event by Our Lady of Nazareth 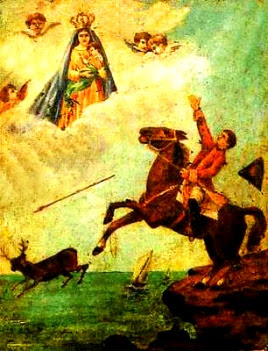 Through my husband’s brother who recently retired, we’ve learned a bit about geography and about a devotion to the Blessed Mother we had never heard of. He recently moved to the Portugese town of Nazaré, a beautiful town where many other Americans retire amid stunning natural beauty with sheer cliffs jutting above the Atlantic Ocean. There, is a magnificent Church dedicated to a miraculous event attributed to the Blessed Mother.

On the feast of Our Blessed Mother’s birthday, September 8, Our Lady of Nazaré is one of her feast days that mark a miracle that occurred in this town.

According to the Legend of Our Lady of Nazaré, one misty morning in 1182, the sheriff—possibly a knight templar—Dome Fuas Roupino, was out hunting. He chased a deer up a hilltop when it suddenly jumped over the edge.  It happened so quickly, and the sheriff’s horse was moving so swiftly and with such force, that it too was headed into the void. At that moment when a split second can feel like slow motion, the knight, called out to the Blessed Mother to save him.

In that instant, the horse turned away in what seemed to be a supernatural way, thus saving the life of the knight. Subsequently, the chapel  Ermida da Memoria was built very near this spot, over a grotto where a small statue of a Black Madonna from Nazareth stood. Today,  near the chapel, the imprint of the horseshoe can be seen in a rock.

Later, the Sanctuary of Our Lady of Nazare was built in the 14th Century to memorialize that miraculous event. It is located on the hilltop called O Sítio. The church was founded upon the visit of King Ferdinand on a pilgrimage to Our Lady of Nazaré. He had ordered work done on the small chapel and also to build a newer, much larger Church to hold all the pilgrims who were coming to honor our Blessed Mother and the miraculous event. 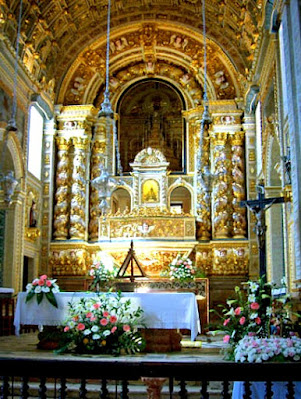 The Shrine of Our Lady of Nazaré, known in Portugal as Nossa Senhora da Nazare, is located in the village of Nazare on Portugal’s Atlantic coast. The village is named after this “Black Madonna” statue of the Blessed Mother and the child Jesus that had been in the grotto. It was brought over from Nazareth centuries before the horse and knight were saved.

Tradition holds that the statue was carved by Saint Joseph.  Saint Luke the Evangelist is credited with painting the faces and hands black. This image is still preserved in the Chapel of Commemoration, built over the grotto, The statue of Our Lady of Nazareth is considered one of the oldest images ever venerated by Christians.

Every year, from September 8-17, the town, now named Nazare,  celebrates Our Lady of Nazaré Festival beginning with a procession and including concerts, folk dancing, bullfights, and fairs.

Our Lady of Nazaré, pray for us!

Check out my latest book: What Would Monica Do? (Inspiration for those carrying the cross of loved ones who have left the faith.)

Other books include: Holy Hacks: Everyday Ways to Live Your Faith & Get to Heaven  Big Hearted: Inspiring Stories from Everyday Families and the best-selling Amazing Grace Series.