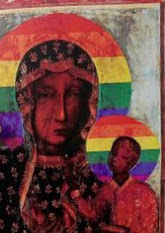 From Poland to the U.S., the Blessed Mother is being used in blasphemous ways.  By imposing rainbow flags onto her images, she is being co-opted by LGBT activists.
In April, there was furor in Poland over a rainbow Madonna that led to the arrest of an LBGT activist for appropriating a sacred image considered a national treasure with the LGBT rainbow colors.


Elzbieta Podlesna put rainbow-colored halos on Our Lady of Czestochowa, known as the Black Madonna, and on baby Jesus, then plastered the image in bathrooms and trash cans in the town of Plock just north of Warsaw.
Podlesna did it to protest the Catholic Church's intolerance, according to her. She was arrested, interrogated, had her apartment and computer searched, and is facing charges.
The famous icon kept in the southern city of Czestochowa, has been considered sacred by Poles for centuries. It is visited by millions of pilgrims annually. The shrine is a place that Saint Pope John Paul II wrote about traveling to as a boy.
In a country where the vast majority of citizens are Catholic, (estimates range from 85% to 97%) many feel that altering this sacred image for an activist cause is disrespectful to God, to the Blessed Mother, to the Church, and to the Polish people.  However, Amnesty International and the Warsaw-based Helsinki Foundation for Human Rights have condemned the police’s strong reaction to a "peaceful protest." According to Polish law, Podlesna could receive a fine or even be sentenced to up to two years in prison for "publicly insulting religious feelings or desecrating a ritual object."
In other sacrilege on this side of the Atlantic, a tweet by @EdmundPAdamus showed an image of the Blessed Mother holding baby Jesus while cloaked in a rainbow mantle. He was responding to @Patrick_Coffin who posted a prayer by Bishop John Stowe of the Lexington Diocese, expounding on how wonderful we all are just as we are. “This ain't weaponized ambiguity, folks. @BpStowe is a sitting bishop of the Catholic Church. This is his Pride prayer/message, cheered on by @JamesMartinSJ,” Coffin twitted.
Adamus responded to Coffin, “Did you ever see this image of Our Lady he permitted to be used in his diocese too? Joseph Sciambra located it ... Terrible.”  And he posted the image of the Blessed Mother in a rainbow mantle. 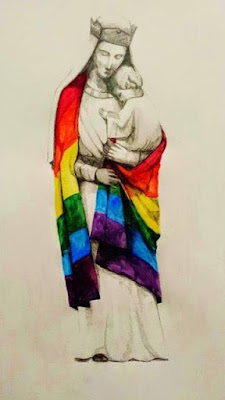 While the rainbow heresy is packaged with fake love—love the sinner but don’t mention sin or be called a hater— Our Blessed Mother is being profaned to promote false teachings.

Make Reparation to the Blessed Mother
Every time Our Lady appeared to the three shepherd children at Fatima, she asked them to pray the rosary. If we do what she asks, she will fulfill her promise that: “In the end my Immaculate Heart would triumph.”  Our Lady of Fatima also appeared later to Sister Lucia and explained “The Five First Saturdays” devotion make reparation for the offensesagainst the Immaculate Heart of Mary:
·        (1) Blasphemies against the Immaculate Conception.
·        (2) Blasphemies against her Perpetual Virginity.
·        (3) Blasphemies against her Divine Maternity and at the same time the refusal to recognize her as the Mother of all mankind,
·        (4) Blasphemies of those who seek openly to foster in the hearts of children indifference or contempt and even hatred for this Immaculate Mother.
·        (5) The offenses of those who directly outrage her in her holy images. 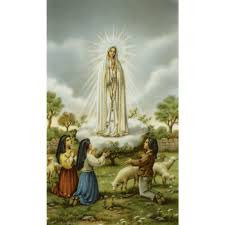 Our Lady told Sister Lucia,  she would assist at the hour of death with all the graces necessary for salvation all those who, on the first Saturday of five consecutive months:
1. Receive our Lord in Holy Communion while in the state of grace.
2. Recite five decades of the Rosary.
3. Keep Mary company for at least 15 minutes while mediating on the mysteries of the Rosary.
4. Go to Confession within the month.
Even if we have already completed 5 first Fridays, we can continue following this powerful formula for making reparation. It will not be wasted. Our Lady of Fatima, pray for us.! Our Lady of Czestochowa, pray for us!
~~~~~~~~