Go Ahead and Be a Martha 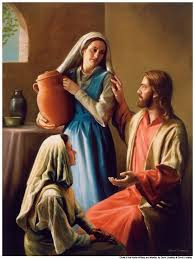 “Don’t be a Maratha,” we are told, referring to the story of Mary and Martha in the New Testament.   Can you imagine such a thing?  I would not like it if people went around saying, “Don’t be a Patti.”.
That is what came of Martha’s worrying about getting tasks done for her guests while her sister Mary simply sat and listened to Jesus.


During a visit to their home, we learn in Luke 10:38-42, that Mary sat at the feet of Jesus while Martha was in the kitchen making preparations. She complained, "Lord, don’t you care that my sister has left me to do the work by myself? Tell her to help me!"
“Martha, Martha,” the Lord answered, “you are worried and upset about many things, but few things are needed—or indeed only one. Mary has chosen what is better and it will not be taken away from her.”
Mary chose Jesus. Of course, that is better. But meals do not prepare themselves. If Martha joined Mary, who was going to get the food ready?
I came to understand that situation better during a homily a few years ago. “There is an order to everything, even the spiritual life, even to loving God,” the priest said. “The first order of the spiritual life is listening to Jesus.”  Loving God isn’t doing stuff for him, the priest explained. It is wanting to be with him.  “Only then,” he said, “can we receive what Jesus has to give us. We have not started being Christian until being with Jesus is the most important thing.”
Martha’s Good Points
I am still not entirely sure how the food prep should have gone, but I do understand that we should spend time with Jesus first, then serve.
Hostess concerns aside, Martha did become a saint.  She went to Jesus with her troubles instead of stuffing them. And she must have accepted the rebuke and instruction. So much so, that Martha became a rockstar follower of Jesus. She believed in his divinity and in the resurrection even before Jesus died and rose from the dead.
After Mary and Martha’s brother Lazarus died, we learn in John 11:19-2 that Martha said, “Lord, if you had been here, my brother would not have died. But even now I know that whatever you ask of God,God will give you.”
Jesus said to her, “Your brother will rise.”
Martha said to him,“I know he will rise in the resurrection on the last day.”
Jesus told her, “I am the resurrection and the life; whoever believes in me, even if he dies, will live, and anyone who lives and believes in me will never die. Do you believe this?”
She said to him, “Yes, Lord.I have come to believe that you are the Christ, the Son of God,the one who is coming into the world.”
Martha had faith and understanding even before her brother Lazarus was raised from the dead and before Jesus died and rose. She believed ahead of time.
So, go ahead; be a Martha.

For more inspiration check out Patti's latest book: Holy Hacks: Everyday Ways to Live Your Faith & Get to Heaven. Other books include:  Big Hearted: Inspiring Stories from Everyday Families and the best-selling Amazing Grace Series.
Follow Patti at Twitter and Pinterest, like her pages at Holy Hacks, Dear God Books,  Big Hearted Families,  Catholic News & Inspiration on Facebook, and her author Facebook page.  To receive articles in your inbox, you can sign up at the right column. Thanks for stopping by.  God bless you!
Posted by Patti Maguire Armstrong