Mother’s Day, Our Lady of Fatima, and 2 Birthdays! 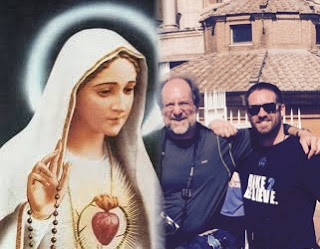 This year, May 13 is both the Feast of Our Lady of Fatima and Mother’s Day.  In our family, my husband Mark and our son Jacob celebrate birthdays on the same day.
It’s especially significant to Mark and me because at that time, we did not understand Church teaching on life and were contemplating no more children. (We ended up with the blessing of 8 more. including 2 from Kenya, and one miscarriage).  A priest that was also a doctor who served at our parish at the time and was also my doctor, had told me that it was not realistic to follow the Church on everything.


Between going on and off the pill and backing out of the tubal two days before surgery, Jacob’s conception seems to be an answer to Mark’s prayers for more children. He figured I was not going to consider it, so he prayed behind my back, thankfully!
So Jacob being born on Mark’s birthday, which lands on the Feast of Fatima and also on Mother’s Day like his dad was, is very significant to us. It’s a birthday present to Mark from God and a blessing for it to land on such a special feast day.

Story of Fatima
It was the event on May 13, 1917 that first brought Fatima to the attention of the world. At that time, the people lived primarily a peasant life, much like they still do today.  World War I was taking place. On this day, three young children, Lucia, 10, Francisco, 9, and his sister Jacinta, 7,were tending a flock of sheep in a field in the outskirts of Fatima.
Around midday, they prayed the Rosary, as was their habit after lunch.  Suddenly, a flash of light in the sky made them think lightening was warning of an impending storm.  There was another flash and then a beautiful Lady, brighter than the sun and holding a rosary, stood over the top of a small Holm Oak tree.  She explained: “I am the Lady of the Rosary” and told them to pray, do penance and to make sacrifices to save sinners. She invited the children to return to the Cove of Iria during the next five consecutive months on the 13that the very same hour. 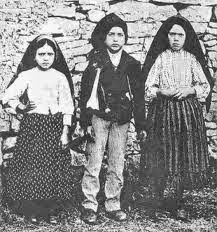 During June, July, September and October, the Lady returned in the Cova da Irai.  In August, the apparition took place in a small farm on the 15th because government officials on the 13th of that month had taken the children away. They were deceived, jailed and then threatened with being boiled in oil if they did not recant their story of the vision.  The children stood by their story even in the face of death.

Miracle of the Sun
What took place on October 13 became known as "Miracle of the Sun.”  Eyewitness reports estimate the crowd that gathered that day to be anywhere from 75,000 or 100,000. Some who had gathered were skeptics; anxious to show the Catholics to be fools for believing the Blessed Mother was appearing.  Regardless of preconceived beliefs, everyone saw the same thing.
At noon, the driving rain stopped, and the clouds parted.  Many thousands of witnesses corroborated that during the next 12 minutes, the sun seemed to leave its orbit and spin, throwing off colors of light.  Everything on the ground reflected its radiance.  Then it spun on its axis and the rim became scarlet and bursts of flames scattered across the sky.  Amazement turned to terror as the sun appeared to plummet to earth. People cried out and prayed, fearing it was the end of the world. Then, a strange breeze swept through and instantly dried clothing, ground and puddles everywhere.  People within a twenty-mile radius saw the event. 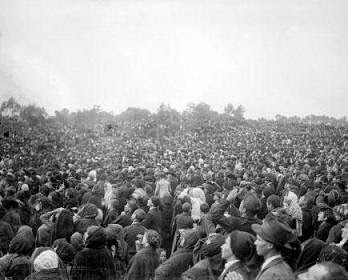 Government officials from the anti-Catholic socialist regime, police officers, and journalists, who were there not out of faith but to investigate, reported seeing the miraculous event.  The two major newspapers carried the same reports of a miracle.
At this same time, the children of Fatima saw the following vision as described by Sr. Lucia in Letter from Sr. Lucia to her Bishop, December 8, 1941, Tuy, Spain:  “When our Lady disappeared in the immense distance of the sky, next to the sun, we saw St. Joseph holding the child Jesus and Our Lady dressed in white with a blue mantle.  St. Joseph and the child seemed to be blessing the world, making the sign of the cross.”
Columnist Avelino de Almeida of O Século (Portugal's most influential newspaper, which was pro-government and anti-religious) reported the following: "Before the astonished eyes of the crowd, whose aspect was Biblical as they stood bare-headed, eagerly searching the sky, the sun trembled, made sudden incredible movements outside all cosmic laws - the sun 'danced' according to the typical expression of the people."
During the apparitions, the children were asked to pray and offer sacrifices as acts of reparation for souls.   “Pray the Rosary every day to obtain peace in the world and the end of war,” Lucia reported her saying.

Our Lady of Fatima’s “Peace Plan”
Every time Our Lady appeared to the three shepherd children she asked the children to pray the rosary. And if we do what she asks, then she will fulfill her promise that: “In the end my Immaculate Heart would triumph.”
The First Five Saturdaysis also devotion she has given to us with powerful promises attached for all who participate. Our Lady told Sr. Lucia that she promised to assist at the hour of death with all the graces necessary for salvation all those who, on the first Saturday of five consecutive months, go to Confession and received Holy Communion, recite five decades of the Rosary and keep her company for a quarter of an hour while mediating on the mysteries of the Rosary, with the intention of making reparation for sins.”  Everything is to be offered to make reparation for sin.
Fulfilling Our Lady’s requests for the five First Saturdays includes:
1. Receive our Lord in Holy Communion while in the state of grace.
2. Recite five decades of the Rosary.
3. Keep Mary company for at least 15 minutes while mediating on the mysteries of the Rosary.
4. Go to Confession within the month.

~~~~~~~~~~
For more inspiration check out Patti's latest book: Holy Hacks: Everyday Ways to Live Your Faith & Get to Heaven. Other books include:  Big Hearted: Inspiring Stories from Everyday Families and the best-selling Amazing Grace Series.
Follow Patti at Twitter and Pinterest, like her pages at Holy Hacks, Dear God Books,  Big Hearted Families,  Catholic News & Inspiration on Facebook, and her author Facebook page.  To receive articles in your inbox, sign up at the right column. Thanks for stopping by.  God bless you!
Posted by Patti Maguire Armstrong