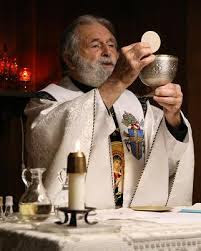 Every now and then I learn about something and wonder: Why didn’t I know about this before?  Father Peter Mary Rookey falls into that category.  I learned about him after coming across the “Miracle Prayer,” written and promoted by him while he was alive. Although we cannot assume anyone is in heaven unless they are canonized a saint, (so we should still send up a prayer for them) it seems from Father Rookey's life that he would be a powerful intercessor.


Born in Superior, Wisconsin, on October 12, 1916. Father Rookey  grew up in  a family of thirteen. When he was eight years old, he was blinded by a Fourth of July firework. Despite being told there was no cure for him, his sight gradually  improved. He credited that to his mother leading the family in praying the rosary each evening "until little Peter's eyesight returns."
Father Rookey was ordained a priest with the Servite seminary on May 17, 1941 at the Servite Our Lady of Sorrows Basilica in Chicago. He helped expand the Order to Ireland where he served from 1948 to 1953 as assistant master and then prior  Benburb Priory. He was fluent in seven languages and served as Assistant Master of Novices, at Mt. St. Philip in Granville, Wisconsin, and then as assistant pastor at Assumption Parish in Portland, Oregon.
Healing Begins
It was while in Ireland that the healing began. Blessing people who requested it after Mass, not an uncommon request, miraculous healings began to occur. Word spread, and more and more people came for his blessings.
TheChicago Tribune wrote about him in 1994. "’It was very humbling,’ Rookey says.  It appeared that many had experienced cures for life-threatening illnesses or injuries-unbeknownst to the young cleric. The priest's popularity did not escape his superiors' attention.”
The Tribune explained that the Church was cautious about all this attention and claims of miracles so by 1953 Rookey was assigned as assistant general of the Servite Order in Rome, putting his healing ministry on hold for more than three decades. “When asked how he felt about that, by the Tribune,  Rookey responded:  “I became a priest to be an obedient servant of God's will. I trust my superiors to make wise decisions about the use of my gifts."
During the late 1960s, after the Charismatic movement took hold and gained acceptance in the Church, Father Rookey's healing ministry became accepted and endorsed by the Church's hierarchy and his order. He became known internationally for miraculous healings and also for his life-changing Miracle Prayer and was the subject of three books. Father Rookey died in his sleep just short of his 98th birthday, on September 10, 2014.


The Miracle Prayer of Father Peter Mary Rookey
Lord Jesus, I come before you just as I am. I am sorry for my sins, I repent of my sins, please forgive me. In your name I forgive all others for what they have done against me. I renounce Satan, the evil spirits and all their works. I give you my entire self, Lord Jesus, now and forever. I invite you into my life, Jesus. I accept you as my Lord, God and Savior. Heal me, change me, strengthen me in body, soul, and spirit. Come, Lord Jesus, cover me with your precious blood, and fill me with your Holy Spirit. I Love You, Lord Jesus. I Praise You, Jesus. I Thank You, Jesus. I shall follow you every day of my life. Amen.
Mary, Mother of Sorrows, Queen of Peace, St. Peregrine, the cancer saint, all you Angels and Saints, please help me. Amen.
Quotes from Father Rookey: “Say this prayer faithfully, no matter what you feel, when you come to the point where you sincerely mean each word, with all your heart, something good spiritually will happen to you. You will experience Jesus, and HE will change your whole life in a very special way. You will see.”
"We all have weaknesses that affect our body, mind, and spirit. But it is our will to overcome them that decides how we live. ‘With men this is impossible; but with God all things are possible,’” (Mt 19:26).
~~~~~~~~