The Catholic Church on the End Times 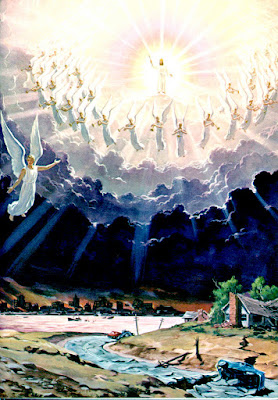 Looks like we missed the rapture. I hate it when that happens!
Christian numerologist David Meade was quite certain that on April 23 the end times would commence, ushering in a rapture, a 7-year tribulation, and a 1000-year reign by Christ.  You would think that these occasional would-be prophets would know that "of that day and hour no one knows;" therefore, "be on the alert, for you do not know which day your Lord is coming,” (Matthew 24: 36-44).


What Meade lacks in accuracy, however, he makes up with persistence. The author also predicted that the planet Nibiru would become visible in the Earth's sky and would then "soon" destroy the Earth and Armageddon would take place last September. He then bought extra time updating it to October, but to no avail.
For reassurance that ignoring end-of-the-world predictions is a safe bet, Wikipedia lists dozens of failed prophecies. The thing about the end, however, is that it’s going to come, so what’s not to be curious about?  And these times seem to tempt God to announce: Time’s up!  But the Church teaches us not to obsess about it. After the Ascension, many Christians thought Jesus would be coming back during their lifetime.  We are just supposed to get on with life and live to the fullest in union with God.

Things the Church Wants Us to Keep in Mind
The idea that Christians will be "caught up" by Jesus in the “rapture” before his final return is a misinterpretation of 1Thes. 4:15-17which explains that those who are alive during the 2nd coming will have no advantage over those who have already died. (CCC 1001-4)
As pointed out in The Good News, the Catechism gives us a general order of events for the end times:
1. The full number of the Gentiles will come into the Church, quickly followed by the full inclusion of the Jews.
2. A final trial of the Church "in the form of a religious deception" will occur, and the supreme deception is that of the Antichrist.
3. Christ will be victorious over the final unleashing of evil and will enact the Final Judgement.

An Exorcist on Armageddon
In an interview for Armageddon? Exorcist Advises: Don't Even Think About It, Father Vincent Lampert, advised that we not worry about the end.  He is the designated exorcist for the archdiocese of Indianapolis, who trained at the North American College in Rome and assisted with over 40 exorcisms with longtime Italian exorcist Father Carmine De Filippis.
Father Lampert explained that evil is not new, and it will be with us until we leave earth, so we should not obsess over the final battle. “God does not want us to get involved in the End Times,” he said.  “Instead, it’s important, every day, to live our life as God calls us.” The end itself is not even something we should fear, according to him.
“If we are living our lives the way God calls us, then whenever he does call, he will find us worthy,” Father Lampert explained.  “Talk of Armageddon often instills fear, but an authentic relationship with God is one of love and mercy. I don’t think faith is authentic if we are living in fear. Worrying about the End Times is about the loss of hope, and it brings fear, and anxiety, and destruction. All of those things are contrary to faith.”
How does an exorcist and parish priest find peace and comfort during these times?  In God, according to Father Lampert.  “I always find my sense of solace in the fact that God is in charge,” he said.  Putting God in charge gives us the power and strength not to let the world overwhelm us, Father Lampert explained. “The human person is made for more than this life. It’ not just an earthly perspective but a spiritual perspective that makes us realize we are called to be in relationship with God.”
~~~~~~~~