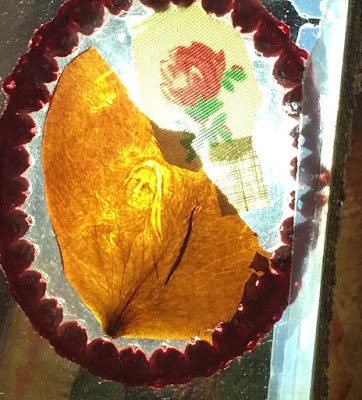 While Rhoda Wise of Canton, OH was alive, that humble, God-loving woman was surrounded by miracles.  There were so many signs and miracles that people flocked from all over to meet Rhoda and ask for her prayers.

In 1939, Rhoda was miraculously healed from an abdomen opening that could not be closed after multiple surgeries, the first one being to remove a 39-pound tumor.  She was later healed from a severe foot injury. 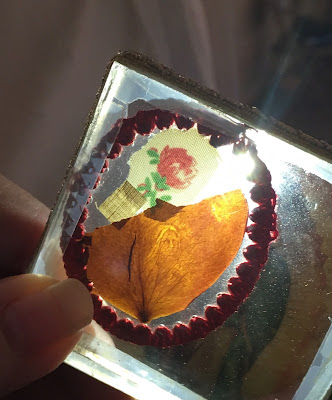 I have written about Rhoda on my blog and was recently invited by my sister Colleen to visit the Rhoda Wise Shrine as part of the Mother Angelica Tour. Both those holy women were from Canton, Ohio.  Mother Angelica was actually healed of a debilitating stomach problem as a teenager after visiting Rhoda.
It was at the shrine that I personally saw a miraculous rose petal that fell from heaven when St. Theresa appeared to Rhoda.  Although she had been healed of her ailments, Rhoda eventually became a victim soul in which she suffered much but received great consolation through visits of Jesus and St. Therese of Lisieux, to whom she was ardently devoted. As explained from her diary, quoted in the book:

“On December 29, 1939, at 3:30 a.m., Our Lord again appeared to me in my room.   Among other things He said:  ‘You will win many souls through your devotion to the Sacred Heart and the Little Flower.’  He then blessed a great many religious articles which I had ready for His coming. The Little Flower also appeared on this occasion, and as they departed she said to me: ‘I will return on my birthday.’

She kept her promise and appeared again on her birthday, January 2, at 4:10 a.m.  She gave me a personal message, and then admonished me not to love and honor her so much, but to love Jesus more.

On January 8, 1940, about 1:30 a.m., the Little Flower again appeared and dropped seven fresh rose petals on my face and chest, telling me to have them photographed.  When I did so, many images of Our Lord and the Little Flower and other saintly persons were visible in the picture.

On April 3, 1940, at 2:40 a.m., Our Lord appeared to me again and dictated a message which I wrote down at His direction in which He said among other things:  ‘Cures more wonderful than your own will take place on this spot.’  He also spoke of many conversions that would occur and declared: ‘I will not see you again for a long time. Much will be accomplished before I return again.’

The day after the tour, my sister, her friend Debby and I went to Mass—always the best place to be—and stopped off at the shrine again before returning home. The shrine is actually the  very home that Rhoda lived and died in.
We went back to absorb more of the aura of such a holy woman who loved God with all her heart.  With just the three of us there, we had a chance to talk with the volunteer staff who let us look closely at one of the rose petals preserved in glass.  The image of St. Theresa can clearly be seen in it, although trying to get the light right in order to capture a good picture of it was a challenge.
St. Theresa can be seen, seemingly holding a crucifix in front of her, and Jesus is looking upon her right in front of her.  Remarkably, when the petal is turned over, rather than there being a back of the picture, the identical image is there with St. Therese facing out, looking in the other direction.
How can the image appear on both sides of such a thin material as a rose petal?  Naysayers might come up with an explanation, but there is no explanation for the life of Rhoda Wise and the many miracles surrounding her that so many people witnessed including having the stigmata, and the many conversions and healings reported both during and after her life.
I believe the rose petal is one of many miracles God performed for Rhoda Wise.  Believe what you want but first learn about her.  Here is a news story and you can go to the website for more information. And stay tuned because her cause for canonization has been opened.
~~~~~~~~~