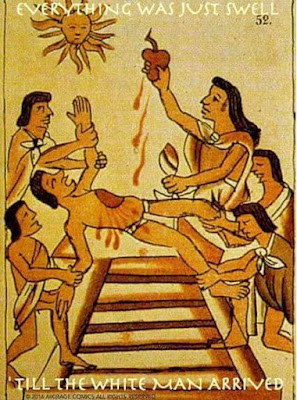 Here is a guest post from my husband Mark Armstrong in honor of Christopher Columbus Day.

I just want to shout out to Christopher Columbus today, on this day commemorating his discovery 525 years ago. Thanks for bringing the truth to a culture that thought slicing hearts out of bodies atop a pyramid was the way to God's heart.   In light of the recent solar eclipse, be glad you did not live in Mexico in the Americas BC—Before Columbus—during an eclipse.


A total solar eclipse at the time of the Aztecs in the 16th century meant death for thousands of innocent people.  A Spanish Catholic priest, Bernardino de Sahagún, journeyed to New Spain (Mexico) in 1529. He learned Nahuatl, the native Aztec tongue, and spent more than 50 years in the study of Aztec beliefs, culture and history. Father Bernardino gave an account of a total solar eclipse when it occurred in Mexico in March 1531, just a few months before the appearance of Our Lady of Guadalupe. He wrote:
“The sun turned red, it became restless and troubled. It faltered. Then there were a tumult and a disorder. All were disquieted, unnerved, frightened. There was weeping. The common folk raised a cry, lifting their voices, shrieking. There were shouting everywhere. People of light complexion were slain as sacrifices. Captives were killed. All offered their blood. In all the temples, there was singing and chants. An uproar, there were war cries. It was thus said, if this is complete, it will be dark forever. The demons of darkness will come down, and they will eat men.”
The slaughter of humans atop pyramids across Mexico had gone on for thousands of years. The Aztecs perfected the system, killing those captured in battle, royal family members, and even poor farmers. One aspect, which distinguishes the Aztec period, was the rapid escalation of ritual human sacrifice. The escalation of human sacrifice occurs from about 1440 to about 1521 beginning when the Aztec Emperor Moctezuma comes into power. 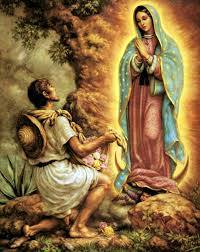 A few months after Father Bernardino witnessed the human slaughter for the solar eclipse on December 12, 1531, the winter solstice that year, St. Juan Diego had his miraculous encounter with Our Lady of Guadalupe. Over the course of the next few years, nine million Indians converted to Catholicism. Human sacrifices for solar eclipses and other reasons ended abruptly in Mexico after her appearance. Thank God and His Blessed Mother!
The woman who dared to eclipse the sun in the image is still on displayed in Mexico City today. The Blessed Mother's image is revered each year by the 25 million pilgrims who come to Tepayac Hill in Mexico City to take part in Catholic Masses, confessions, canonizations, but no more human sacrifices. Her Son's sacrifice of himself was enough for all of us and for all ages and races and peoples.
~~~~~~~~~
For more inspiration check out Patti's latest book: Holy Hacks: Everyday Ways to Live Your Faith & Get to Heaven. Other books include:  Big Hearted: Inspiring Stories from Everyday Families and the best-selling Amazing Grace Series.
Follow Patti at Twitter and Pinterest, like her pages at Holy Hacks, Dear God Books,  Big Hearted Families,  Catholic News & Inspiration on Facebook, and her author Facebook page.  To receive articles in your inbox, sign up at the right column. Thanks for stopping by.  God bless you!
Posted by Patti Maguire Armstrong