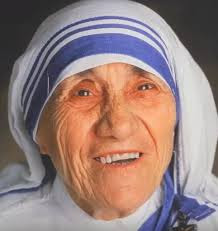 Dear Mary Alice,
I saw the article about you titled “San Rafael woman to break canon law to be ordained Catholic priest.”   You may have been a great nurse for 35 years, and enjoyed watching the (heretical) movie Pink Smoke Over the Vatican, but those are not qualifications for the priesthood.  For starters, a Y chromosome is missing.  Yeah, I know…gender equality, womanpower…blah, blah, blah-- but let’s talk.


Consider canceling your plans in October to become a Catholic priest. Trying to hijack the Catholic Church isn’t the way, the truth, and the life.  Jesus is in charge, and in his absence, the pope runs things.  Pope Francis continues over 2000 years of unity among the Bishops on a male only priesthood, beginning with the 12 male apostles.  Ample historical evidence explains why women can't be priests.
Canon Law 1024 dictates what is possible so unlike a traffic law, you don’t have the power to override this one.  It says only baptized Catholic men can become priests, so you cannot be a real priest. 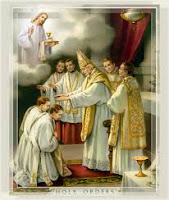 Consider the case of Georgia Walker who attempted ordination last year.  Afterwards, she received a certified letter from Bishop Robert Finn reminding her that she had been advised of the "seriousness of her contemplated course of action to attempt to receive sacred ordination."  Walker was informed that her excommunication was effective immediately, but the diocese was ready to assist if she wanted to return in good faith.  It was not an action of the Bishop, but under church law, Walker incurred automatic excommunication through her participation in a simulated ordination.
That’s how it ends.  You will not be a priest.  You will also not be a Catholic.   So realize, Mary Alice, just like putting on a nurse’s uniform does not make someone a nurse, if you dress up in a clerical Roman collar, it will be like wearing a Halloween costume or dressing up like a rodeo clown—all pretend.
You say that you want to minister to the dying.  Mother Teresa—now St. Teresa of Kolkata--shared those ambitions. Ask her to intercede to God, praying for your guidance according to the life he created you for.
Mother Teresa was a strong example.  No one pushed that woman around! Her humility gave her power to do God's will, trusting that he would provide.  Such a woman has superhuman strength, unwilling to let any mere mortal stand in the way.
During the canonization Mass at the Vatican on September 4, Pope Francis said in his homily:  "Mother Teresa, in all aspects of her life, was a generous dispenser of divine mercy, making herself available for everyone through her welcome and defense of human life, those unborn and those abandoned and discarded. She bowed down before those who were spent, left to die on the side of the road, seeing in them their God-given dignity. She made her voice heard before the powers of this world, so that they might recognize their guilt for the crime of poverty they created." 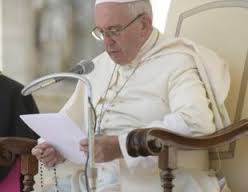 Mother Teresa won countless awards including a Nobel Peace Prize. She founded the Missionaries of Charity, which now has almost 5,000 nuns, 430 brothers in addition to lay missionaries and priests that all combined operate 600 missions, schools, and shelters in over 120 countries.    Mary Alice, follow her example and work with the Church instead of against it.
If you won’t listen to me, then listen to Pope Francis whom you say you admire.  After canonizing St. Teresa, he said that, "mercy was the salt which gave flavor to her work, it was the light which shone in the darkness of the many who no longer had tears to shed for their poverty and suffering,” he said. "May she be your model of holiness."
And if you won’t even listen to Pope Francis, then listen to Mother Teresa herself.  While speaking to an Indian journalist in 1984, she made this observation: "Nobody can be a better priest than Our Lady, and she remained only the handmaiden of the Lord."
Can I hear an amen, Mary Alice?
~~~~~~~~~~
For more inspiration, check out Big Hearted: Inspiring Stories From Everyday Families.   Follow Patti at Twitter and like her Facebook pages at Dear God Books,  Big Hearted Families and  Catholic News & Inspiration on Facebook.  Sign up at the right column to receive articles in your inbox.  God bless you!