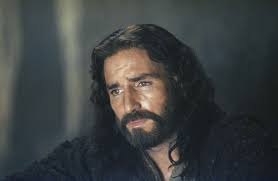 “Everyone wants resurrection but no one wants suffering.”  Those are the words of  actor Jim Caviezel, best known for portraying Jesus Christ in the 2004 film The Passion of the Christ.

In this video, Caviezel explained that playing the role of Jesus entailed a great amount of suffering—even a dislocated shoulder, pneumonia, a 14" laceration, and he was struck by lightning while hanging from the Cross.  He said that Mel Gibson warned him that perhaps he should not take the role since it could damage his future reputation as an actor.  But Caviezel felt the part was for him. “My talent came from God,” he told Gibson.  “We’re all called to carry our own cross if you don’t pick up and carry your own cross you will be crushed by the weight of it.”
And carry his cross he did.  At one point, hanging on the cross and struggling to breathe, he considered that he could die out there.  In the film, when Caviezel’s body turned blue, that was not stage makeup; it was real.   If he were to die in the making of the film, he felt that was okay because his life would have been used to turn people towards God.
“I was struggling physically, but our Lord was sustaining me,” he said.   “I wanted to experience every bit of it as it was given.”   According to Caviezel, this is what all Christians are called to do. “Our Lord’s death was for all but the modern day Christians say, ‘But Jesus did that, so I don’t have to.”
Caviezel warned people that it’s not reality to think Jesus saved us from suffering.  “Okay then, why did Peter have to do it then? And why did John have to do it and why did all the apostles have to sacrifice themselves, and what about all the martyrs?”
The devil wants to take advantage of our weaknesses, Caviezel said.  But he implored us to be strong  And when people excuse sin saying it’s their freedom to choose, he said: “Every generation of Americans needs to know that freedom exists not to do what you like, but it’s having the right to do what you ought.”
According to him, our democracy cannot be sustained without a shared commitment to moral truth and reasoning.  “Set yourself apart from this corrupt generation my brothers and sisters,” he said.  “You were not made to fit in, you were born to stand out.”
Caviezel explained that no matter what anyone has done, Jesus will forgive and have mercy, but we need to turn to him every day.  ”You can’t be an Olympic athlete or a world champion by practicing once a week,” he said. “You have to take Jesus Christ into your life every day.”  Jesus wants much from us, according to Caviezel, and will continually bring us to the next level if we stay close to him. An important way to do that, Caviezel said, is to pray, fast and to read the Bible.  (He was involved in making an audio Bible with The Word of Promise complete with a full orchestra and cast of 500 actors.)
By staying close to God, Caviezel said people will feel the Holy Spirit go through them. “And People will be looking at you and saying, what are you on? “ he said.  “You will be on Jesus Christ.”


Caviezel ended by telling people that everyone is perfect.  “There is no one else like you. He is coming to you right now, all he has to hear from you is yes.”   He reminded them that Jesus asked us to love one another and we should not to worry about being famous or known in this world. “People will forget but God never does,” Caviezel said. “I would rather be an unknown here and have my name up there.”
~~~~~~~~~~
For more inspiration, check out Big Hearted: Inspiring Stories From Everyday Families.   Follow Patti at Twitter and like her Facebook pages at Dear God Books,  Big Hearted Families and  Catholic News & Inspiration on Facebook.  Sign up at the right column to receive articles in your inbox.  God bless you!