Our Lady of the Rosary Apparitions in Argentina Approved 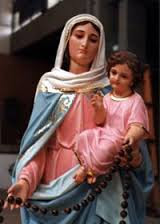 On Sunday, May 22, 2016, the local bishop of San Nicolas, Argentina, Most. Reverend Hector Cardelli, announced that the apparitions of Our Lady of the Rosary are “supernatural in character” and “worthy of belief.”
A devout Catholic housewife with no formal education, claimed the Blessed Mother had visited her daily for 6 ½ years and that she also received 68 messages from Jesus Christ.  There were numerous documented miraculous healings and beginning in November 1984, she received the stigmata during Advent and Lent.

The First Appearance
It all began on September 25, 1983, when the Blessed Mother briefly appeared to Gladys Quiroga de Motta, in her room, in San Nicolas de los Arroyos in Argentina. The mother of two grown daughters, a grandmother, and wife to a metallurgical worker, had been in her room praying her rosary at the time.
In the History of Mary of the Rosary of San Nicolas it is explained that Mary was dressed in blue, held Baby Jesus in her arms, and a rosary in her hand. On the previous day, she and some neighbors had seen the rosary hanging in her bedroom glow.  Our Lady appeared again on the 7th and 12th of October.   She spoke to Gladys for the first time on October 13, the anniversary of the last appearance at Fatima.
“You have done well.  Do not be afraid.  Come to see me.  I will take you by the hand and you will travel many paths. Rebels are unjust and humble the servants of the Lord.  Seek help and you will receive it.  Do not fear.  Nothing will happen to you.  The Lord leaves nothing at random.”  Gladys was encouraged by the Blessed Mother to record and share the messages, which she began to receive frequently.

Our Lady of the Rosary Statue
On November 27, 1983, as Gladys’ confessor, Father Perez listened to Gladys description of the Blessed Mother, he realized that a statue of Our Lady of the Rosary had been stored in the bell tower for many years.  It had originally had been blessed by Pope Leo XIII and put in a place of honor when the cathedral was inaugurated in 1884.
When Fr. Perez led Gladys to the statue, she immediately identified it as the image of the apparitions.  At that moment, the Virgin Mary appeared across from the statue and referred to Exodus 25: 8, describing a church to be built. “They shall make a sanctuary for me, that I may dwell in their midst." The passage contains the instructions given by God to the Israelites for building the Ark of the Covenant by means of which Yahweh would be present to them.
After a commission of Inquiry gave approval, construction began on the temple and the statue was renovated and transferred to the new church in 1989. 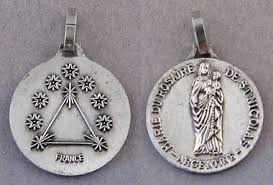 Gladys was also instructed by Our Blessed Mother to have a medal struck with the invocation of Mary of the Rosary of San Nicolas, and in the reverse the Most Holy Trinity with seven stars.  “My daughter, the meaning of seven stars is seven graces that my Son Jesus Christ will grant to whoever has it on its chest. Praised be the Lord.”

First Cure
During 1984, the first miraculous healing was reported when seven-year-old Gonzalo Miguel was cured from a brain tumor after it appeared death was imminent. His mother was seven months pregnant with her seventh child
Father Ariel David Busso came on October 30th, to give the young boy his First Holy Communion and administer Last Rites. Fr. Busso placed him under the protection of “Our Lady of the Rosary of San Nicolas.” After receiving Holy Communion, Gonzalo began to improve rapidly.  Within days, he was pronounced inexplicably healed.

Processions
Pilgrims began traveling from around the world to gather for processions on the 25th of every month, the date of the first apparition. On the 25th anniversary, CNA reported that an estimated 200,000 people participated in the Eucharistic celebration near the Sanctuary of Mary of the Rosary. 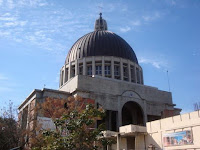 At the Mass presided by the Bishop of San Nicolás de los Arroyos, Héctor Cardelli , he said that Mary reminds us to listen to Christ the Teacher. According to CNA, the bishop emphasized that during the 25 years, “her [The Blessed Mother’s] maternal accompaniment has come to us and spoken of her love and fidelity to follow Christ, who is our Way, Truth and Life.  Christ is the point of reunion, because from Him, our steps have a course, our motivations have direction and our lives make sense."

The Messages
In totality, Gladys received more than one thousand eight hundred messages, from October 13 1983 to February 11,1990.  Our Lady’s final message was: "I invite you to live my instructions step by step: pray, repair, trust!"

Against Evil
I want to heal my children of that disease that is the materialism and that many suffer, I want to help them discover Christ, to love Christ and to say to them that Christ prevails above all.

The prince of evil spills today his poison with all the forces, because he sees that he is concluding his sad reign.  He has little left, his end is near.  Oh my poor children, few of you are those that deepen in Christ, and many of you are highly eroded by sin.

Make known what I give you, the atheism is flooding the nations, absence of God is everywhere; it is why the word of the Lord must be listened to and not be despised.  The action of His word will do much if the heart is opened.

It is in fact this time, a precious time that does not have to be wasted but to be taken advantage of.  The Redeemer is offering to the world the way to face the death that is Satan; is offering as He did from the Cross, His Mother, mediator of all grace.

Faith
The most intense light of Christ will resurge, just as in the Calvary after the crucifixion and death came the resurrection, also the Church will resurge again by the force of love.

The Lord is revealing to you by means of the messages and the Sacred Scriptures what is expected from men.  Do not close the doors to him.  Commit to Jesus as He committed to us.

My children must know that I call them to the consecration, because being consecrated to my Heart; they belong to the Mother and to the Son.

The coming of the Lord is imminent, and as they say in the Scriptures nobody knows the day nor the hour, but it will be; and certainly for that hour the soul of the Christian must be prepared.

Pray the Rosary
The Holy Rosary is the most feared weapon of the enemy.  Santo Rosario is the weapon to which the enemy fears to him. It is also the refuge for those seeking relief, and is also the door to enter my Heart.  Glory to the Lord for the light that He gives to the world.

My daughter, at this time there is extreme need of prayer.  The Holy Rosary will be heard by the Lord this day as if coming from my voice.

The prayer is my request, and is directed to all mankind.  The prayer must come from a willing heart, must also be frequent and be done with love.  It must never be left aside, since the Mother wants that by her the children arrive at God and with which the enemy is defeated.

Messages on the Eucharist
Eucharistic Jesus is alive and true body.  Adore and love Him.

Messages of Jesus:
Glorious days await you.  Rejoice In Me my beloved children.

Today I forewarn the world that which the world does not want to notice:  the souls are in danger, many will be lost, and salvation will arrive at few if I am not accepted like The Savior.
I want a renovation of the spirit, a loosening from death and an attachment to life. The Heart of My Mother is the chosen one so that what I request becomes reality.  The souls will find Me through Her Immaculate Heart.

Previously the world was saved with Noah's Ark.   Today the Ark is My Mother. By means of Her, the souls will be saved because it will bring them towards Me.  Whoever rejects My Mother, rejects Me.

Many are ignoring the graces of God these days.   You must go and evangelize.  Do not pay attention where.  Wherever you are, evangelize to your brothers who know nothing about the word of God.  Do not forget.  Evangelize.


A reader has informed me that medals can be ordered: http://www.giftscatholic.com/ .
Here are some of the first messages published on the Internet, covering Sept 25-December 31 1993, courtesy of Faith Publishing.  The Miracle Hunter gives the sequence of events.  For more information, Fr. Rene Laurentin has written An Appeal From Mary in Argentina.
(I am trying to track down a way to get the medals. Once there is a way to order them, I will post the information in the comment section of this article. I will also put up an announcement on this blog. If you subscribe to my posts (on the right side, FeedBurner) the announcement will come to your email.)

~~~~~~~~~
For more inspiration check out Patti's latest book: Holy Hacks: Everyday Ways to Live Your Faith & Get to Heaven. Other books include:  Big Hearted: Inspiring Stories from Everyday Families and the best-selling Amazing Grace Series. Follow Patti at Twitter and Pinterest, like her pages at Holy Hacks, Dear God Books,  Big Hearted Families,  Catholic News & Inspiration on Facebook, and her author Facebook page.  Sign up at the right column to receive articles in your inbox.  God bless you!
Posted by Patti Maguire Armstrong