Invasion of the Body Snatchers is for Real

One summer afternoon during the Sixties, I watched as pods from another planet grew replacement bodies to invade the human race with duplicate, soul-less creatures.  After watching the original version of The Invasion of the Body Snatchers, as an eight-year-old, I felt fearful walking around my neighborhood as if there was something out there.
Many years later, I am again fearful of what is out there. We have been invaded; this time for real.  I will offer the proof.


Evidence People are Being Replaced
The aliens knew that a key place to begin planting pods was in Washington, D.C.  For instance, on Sept. 21, 1996, President Bill Clinton signed the Defense of Marriage Act, federal law that defined marriage as the union of a man and woman.  Now, he promotes the opposite.  His body must have been snatched.  Since he already had alien-like tendencies, it was not very obvious, but there are many more blatant examples.
In 2012,  a large crop of pods replaced many voters in Maine and Maryland.  Previously, legislation to legalize supposed same-sex marriage was voted down 32 times in this country.  Then suddenly, on November 7, a majority of voters in those two states accepted what was once thought ridiculous. Now, so many people—especially judges--have been replaced by aliens that all hell is breaking loose.

Hot spots
There are hot spots for pod growth throughout the world.  Belgium is noteworthy among them.  As of February, it is legal in that country to euthanize children with less than optimum health.  Disabilities and suffering have become reasons for children to decide to die.
The Vatican’s Pontifical Academy for Life, and the National Catholic Bioethics Center in Philadelphia, among many other noteworthy organizations and people, pleaded with the Belgium government to refrain from such barbarism. But pleading  with aliens was to no avail.  Belgium’s Parliament on Feb. 13 sent the bill to their King Philippe who signed it into law. Now, even little children who still believe in Santa Clause are considered capable of choosing suicide.  Parental and doctor consent is necessary, but I fear the pods have already replaced those adults.

Ground Zero
Where did these aliens first infiltrate?  How did they get their foothold?  Planned Parenthood.  In 1968, we were warned by Pope Paul VI in his encyclical Humanae Vitae, that the consequences of artificial contraception would weakened marriages and families and also lead to abortion.  He was completely right.   Planned Parenthood promotes everything the Pope warned against.

Margaret Sanger, founder of what became Planned Parenthood, seems to have been an alien directly from the mothership.  Her two loves were sterile sex and reducing minorities.  She spoke of sterilizing the "unfit," for the "salvation of American civilization.”  At a March 1925 international birth control gathering in New York City, she warned of the "black" and "yellow" peril. 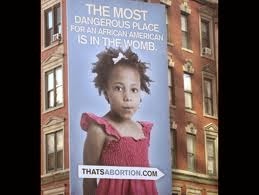 The American Thinker reported that one of Sanger's first birth control clinics opened in Harlem in 1929.  She was diabolically shrewd, inviting Black people of influence to get behind her clinic and the “Negro Project” to promote contraception so the White supremacy goals were hidden. "We do not want the word to get out that we want to exterminate the Negro population…” she declared.
Since 1973, when abortion was legalized, over 14 million African-American babies have been killed, making it the leading cause of death for Blacks.  Yet, our Black president strongly supports abortion clinics—which are suspiciously concentrated in minority neighborhoods. 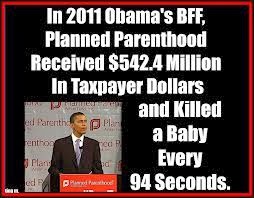 One-third of all abortions are on Blacks even though they only account for 12% of the population.   Rather than being upset at an organization that annihilates his race, the President has said, “God bless Planned Parenthood.”   The only explanation for this is that he has been replaced by a pod.
The big pod crop in Washington has been so successful that the federal government gives massive (in 2012, $542 million) amounts of taxpayer money to Planned Parenthood.  Imagine! The government giving an organization money to kill off future taxpayers.
Now that the aliens have a strong foothold, Planned Parenthood is bold enough to release sex-training videos to further destroy humanity.  The Planned Parenthood of Northern New England, used some of their $2.75 million in tax dollars last year to  produce an online video promoting bondage and sadomasochism to teenagers. To make it seem wholesome and safe, it proposes “rules” to follow when engaging in these activities because,  “[It] relies upon and creates trust.”
Planned Parenthood has already been in the sex training business for some time, and has a number of programs “For Teens” such as their project called, “A Naked Notion” with videos to help them better enjoy sex.   If you can stomach reading more, visit Joe the Plumber.

Souls Snatchers
Invasions of the Body Snatchers as it is taking place in our world, is actually the Invasion of the Soul Snatchers.  It is not aliens we are fighting, but the devil.  Taking over a body is not so big a deal.  Bodies are ashes to ashes. It is the soul that is the everlasting trophy. "Do not fear those who kill the body but are unable to kill the soul; but rather fear him who is able to destroy both soul and body in hell (Mat 10:28).
Rather than pods in the takeover, the devil uses pride to convince people that what they want is always the superior good.  Pride puts “self” where God should be and always ends up in stupidity.  In the movie, people could smash up the pods to stop the formation of the creatures.  In real life, we must fight evil with prayer, fasting, Mass, the Eucharist, and speaking out.

God is the Creator, more powerful than the soul snatchers.  It’s hard to watch the takeover all around us, but it is consoling to know that in the end, God wins. In the meantime, we are blessed to live in the company of the Blessed Mother and all the angels and saints and to be able to put up an impenetrable defense.  For they can take our body but not the soul.
_________________________________________________________________________
For more inspiration, check out Big Hearted: Inspiring Stories From Everyday Families  uplifting stories on love and life. Children's books,  Dear God, I Don't Get It and Dear God, You Can't Be Serious are fiction that present faith through fun and adventuresome  stories.  Follow Patti at Twitter and like her Facebook pages at Dear God Books,  Big Hearted Families.