While a pastor, before his reversion back to the Church, Jeff Cavins became a player in a tragic story involving a 13-year-old and an accidental killing. He had no idea how he could help to her, so he asked Jesus, “What would you do?”


Driving down the street headed for the Dairy Queen one afternoon, I could not get Tabitha out of my mind. The tragedy of this young girl’s life played on my mind much like a repetitive song that relentlessly repeats a chorus refusing to leave the brain.


Everyone in Dayton, Ohio where I was working as a pastor at the time, was talking about Tabitha.  Although a mere 13-years-old, she had been arrested for the murder of another teenage girl.  But this was no cold-blooded murderer.  Tabitha wanted nothing more than to put an end to the other girl’s bullying of repeatedly hitting Tabitha on the head with a brick.  When the harassment only got worse, Tabitha went to her older brother for help.
“The next time she tries it,” big brother advised, “Run into the house and get a steak knife.  Then, pretend you are going to stab her but just tap her on the shoulder with it.  That will scare her and she’ll leave you alone.”
When the bullying occurred once again, Tabitha followed her brother’s instructions.  But as she aimed the knife just above the other girl’s shoulder, it accidentally pierced the juggler vein.  With blood spurting out, the injured girl ran screaming down the street. Before she reached the end of the second block, she fell down dead.
The police were called and immediately arrested Tabitha, who was in shock and offered no resistance.  It was a story that the local news sensationalized for days.  The immense tragedy of this accident and its horrifying result on not one, but two victims--the bully and the bullied--played on the minds of an entire community.  “What a shame,” everybody said.  “How sad.”
I was in the business of offering comfort and guidance, but here I was feeling just as inadequate as the next person. The sadness was overwhelming and my helplessness stung bitterly.
As I drove along, Tabitha consumed my thoughts.  Unable to shake it off, I pulled my car to the side of the road and sat contemplating the enormity of it all.  I wondered, if Jesus was in my place, what could He possibly do to help in this situation.   “Lord, what would you do if you were here?” I prayed.
Deep from within my heart I heard these words: “If I was there, I would go down to her prison, wrap my arms around her and say, ‘I love you, I love you.’” The answer was so clear.  As a Christian, I am the body of Christ; I am His arms, His legs, His hands...His voice.
“Lord, if that’s what you want me to do, I will do it,” I prayed.  I turned the car around and headed back into downtown Dayton.  Once I found the jail, I walked up to the front desk.  “My name is Jeff Cavins and I want to see Tabitha,” I announced to a surprised guard.
“No one is allowed to see her,” the guard responded and then paused and gave me a funny look.  “Did you say you are Jeff Cavins?”
“Yes” I answered.
“Did you lead an Emmaus Cursillo retreat for women a couple of weeks ago?”
Again I answered: “Yes.”
A big smile crossed his face.  “My wife went on that retreat and her life has been changed.”  He thought a moment and then handed me a pen.  “Here, sign this and I’ll take you to see her.”
We walked down a stark corridor to an empty jail where I was instructed to wait while he went to get Tabitha.  At that moment, the enormity of my actions hit me.  Only 15 minutes earlier I was on my way to get an ice cream cone.  Now, here I was, nervously sitting in a jail cell.  When the door creaked open, in walked a petite little girl, trembling with fear.  I later learned she thought I was there to take her to prison.
As I looked into her scared brown eyes, I stepped toward her.  “Tabitha, my name is Jeff and I was driving down the road thinking about you today.  I asked the Lord what He would want me to do about you.”  Then, I walked over to her and put my arms around her.  “Tabitha,” I whispered.  “From Jesus:  I love you so much.”  She cried and I held her.  I sensed that I had truly touched her by reaching out and loving someone who the world had discarded. 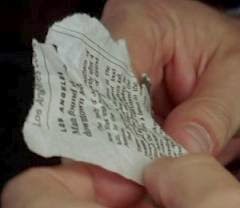 Tabitha stepped back and opened her hand to reveal a small, crumpled piece of paper.  She unraveled it and showed me a Christian tract about accepting Jesus as your savior and asking Him into your life.
“I prayed this last night,” Tabitha said.  “And here you are today.”
Jesus had come to put His arms around her and say, “Tabitha, I love you.”
Realizing the Lord had used me to touch this young girl’s life was very emotional.  Although everyone in Columbus knew about Tabitha, no one had come to visit.  It made me think:  What good is it to be the body of Christ unless we are going to act like the body of Christ.  If we would simply act like the body of Christ--be His arms, His legs, His voice--lives would change. Christ is looking to us to do His work if we will simply yield to His will and take the risk of loving others.  Once we do that, at any hour on any day, even on the way to the Dairy Queen, Jesus can use us.

This story is from the book, Amazing Grace for the Catholic Heart. Jeff Cavins is an internationally known speaker and author. Jeff is the creator of The Great Adventure: A Journey Through the Bible, an interactive program that helps people read the “big picture” of God’s plan in Sacred Scripture.
__________________________________