My Child's Voice Brought Me Back by Joy Veron 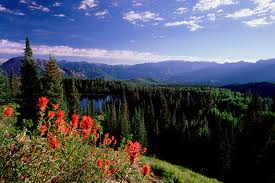 Every Mother's worst nightmare: "I could not just watch my children plunge to their deaths so I threw my body in front of the vehicle."

“Come on, Mom, let’s go,” my kids begged. It was a typical plea from kids painfully waiting for adults to finish up so they could get on with their own activity.    It had been a beautiful weekend in the Colorado mountains visiting my parents.  It was hard to leave on this crisp, clear morning, so my husband, Christophe, and I promised our children, Chloe, seven; Annie, five; and Elliot, two, one last swim in the hot springs before we headed home to McAllen, Texas.  But first, my parents were excited to show us the mountain cabin they were thinking of buying.
My husband had gone ahead with Dad so they could make an inspection of the cabin.  When I pulled into the driveway with my mom and kids, we all rushed out. Mom and I absent-mindedly left both front doors to my car open thinking we would be just a few minutes.  The empty cabin held little interest for my children.  Putting their swimsuits to use was all they could think of.  “Can we go yet?” they pleaded.

“Okay, let’s go,” I announced.   The adults kept talking and walked to our Chevy Suburban while the children piled in. Then, without warning, the gear slipped and the car began moving forward. It was headed straight toward the deep canyon below.

“God, no!” I screamed.  My dad and I had seen it first and instantly began sprinting toward the car.  It was headed toward a tree.  “God, let it hit the tree, let it hit the tree,” I prayed.  Instead, it actually seemed to veer away from the tree.  With nothing else in its path, the car headed unimpeded towards the cliff.

Although everything was happening fast, it felt as if it were all in slow motion.  The doors closed and I saw my three children look at me, frozen in fear.  Chloe looked at the canyon and then tried to get her brother and sister to buckle up in the back. I realized she knew she was going over.   Adrenaline and horror surged through me.  A burst of speed led me to the front of the car. It seemed there was no time to open the door and jump in so my instincts took over.  I could not just watch my children plunge to their deaths so I threw my body in front of the vehicle. I was the only thing in its path now, fifteen yards from the edge.  Leaning into it was my only hope of stopping the car’s progression.

My small frame was no match for a truck with three tons of steel that kept gaining ground.  I was getting pulled under so I grabbed onto the hood but still fell back.  The bumper ran over me, taking my legs and pushing me over as if doing a summersault.  The tires slowly tread on me.  The moment the tires hit my lower back, my legs instantly felt as if they were floating above me. The car moved on.  My ribs were crushed and my clavicle broken.  The tire missed my head because it was tilted to the side or otherwise my skull would have been crushed.  But the intense pressure broke the blood vessels in my eyes and I went blind. Although it felt like I was in a dream, I thought of my kids.  “God, don’t let me hear the crash,” I prayed. “I can’t bear it.”

My dad had not seen me go under the car.  All he saw was that the car kept moving toward the canyon.  Perhaps because the car bumped over my body, the passenger side door swung open.  It must not have latched.  My dad dove into the car, landing on the floorboard and fearing that he would be going down with the children.  Instead, he was able to reach over and put the car into park.  The car stopped six or seven yards from the edge.

Dad got the children out and I could hear him shouting, “Thank you, God!  Thank you, God!”
Then I heard my mother scream my name.  Until then, no one had realized what had happened to me.  My dad reached me first.  “Joy, I’m going to move your leg,” he said, his voice panting and shaking.  Although I could feel nothing, my left calf was twisted above my thigh.

“Don’t touch me,” I cried. I had no idea what would become of me, but I had heard many times never to move someone after an accident, but to wait for help.  “I’m paralyzed and I’m blind,” I cried.  “I don’t want to live. I can’t handle both.”

I thought of the children. “Get the kids,” I gasped.  “I need to say good-bye.  I need to tell them I love them.” I did not expect another chance. In spite of the shock and the severity of my injuries, peace came over me. I was ready to go.    At that moment, I heard a powerful but calm voice that came from somewhere outside of me.  I knew it was God. “It’s your choice if you live or die, but if you choose to stay, you’ll have to fight.”

Then, I heard Chloe screaming for me.  “My mommy’s dying.  I want to see her.”   I loved my children so much. That love pulled me back.  I chose to stay and then lost consciousness.

I was taken by stretcher on a helicopter.  My husband and parents feared they would never see me alive again.  A policeman offered to take my children to his home while they drove down the mountain to the hospital.  I faded in and out of consciousness.  I heard the emergency technician tell the pilot that my veins were blown so he could not get an IV in me.  “There’s nothing I can do,” he said frantically.

Thinking I was really going to die, I actually felt happy.  I’m so close to my kids, this thought would normally have caused me to panic, but instead an unbelievable peace washed over me again.  The voice returned.   “No, it’s not your time.”   Then, immediately I experienced the horrible pain of my injuries for the first time. Again I lost consciousness.

In the emergency room, I came to. I learned that I would never walk again.  Yet, in spite of my critical condition, there were little miracles.  The radiologist had never seen ribs crushed to the extent mine were and yet my heart was untouched.  If the car had stopped on me or if my head had not been tilted, I would be dead.  My vision returned that same day but my life was in danger for the first week.  Friends, relatives and entire church congregations reached out to others to create a prayer chain for me that linked across the country.  I felt their prayers lift me up and get me through moment to moment.

There’s not much I can remember during the first week. Once I was stabilized, I was taken to surgery. Afterward, I ran a high fever and was extremely uncomfortable but I was no longer in danger of dying.  Still, I became agitated and feared death.  My mom, who had been at my side, left the room for a short while.  While she was gone, a man dressed like a nurse or doctor with a white jacket, came into the room.  He looked to be in his fifties and had long silvery-blonde hair and beautiful blue eyes.  He smiled at me and reached for my medical chart which was hanging on the back of the bed. 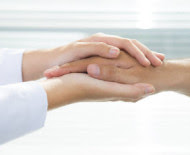 The man looked at my chart and then looked at me. “Joy,” he said in a strong but gentle voice,  “you are going to be okay.”  His words calmed me.   It was as if he was telling me about more than just my medical condition but about my life.  He was telling me that even with my handicaps, I was going to be okay.  When my mom returned, I excitedly told her about the man and that I was going to be okay. My mom ran out in the hallway but no one was there. She went to the nurse’s station and asked who had come in to see me.  The nurse on duty said no one had gone past her.  I feel certain that it was my angel who had come to lift my spirits and give me hope.

I was in the hospital for another five months and in rehabilitation for two months.   It’s been seven years now since the accident and I continue to do physical therapy.  I have not given up hope of one day walking again.

There have been many struggles but my family pulled me through.  My kids still needed a mom.  I wanted to take care of them and not just sit in my room and cry.  I had to learn to maneuver my wheel chair and drive and be the mom I was before.

Some times were tougher than others.  One day, I told Christophe it was not fair for him to have a wife in a wheelchair. “I’m holding you back,” I said. “This isn’t what you bargained for.”

“Joy, if you had no arms or legs, I’d carry you,” he said with tears in his eyes. “You’re still the woman I love.”

Another time, when I was frustrated with struggling to do even basic things such as dress myself, I asked my dad if throwing myself in front of the car even made a difference in the end.

“The police said that you slowed the car just enough,” he said.  “In another second, it would have crashed down onto the rocks. Honey, you saved your children’s lives.”

At that moment, I knew I would do it all over again if given the choice.

Amazingly, many good things have come out of this.   I believe that my children are more understanding and compassionate with others because of what they’ve been through with me. It’s brought out a lot of love and mercy in them.  My daughter Annie and I even keep a list of all the good things that have come out of this.  We’ve been on Oprah and we’ve met so many people. Our “good list” has grown long. I have learned that there is good in everything, no matter what you go through. I did not want it to happen and there are days I want to throw my wheelchair across the room, but through the grace of God, I can take the good and use it.