Studies Show the Ten Commandments are Good for You 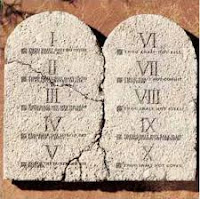 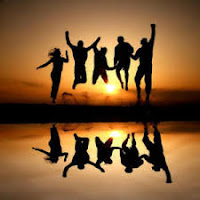 You don’t have to believe God or even believe in God to realize that the rules for everlasting life are also good rules for just plain living.  (Click on the links to read just some of the research I found to back up the Ten Commandments.)
I.  I am the Lord your God, You shall have no strange gods before me

II. You shall not take the name of the Lord your God in vain

People who believe in God are happier.
While studying differences in unemployment benefits between European countries, researchers stumbled into the discovery that people who believe in God are usually more content in life. They also found that Catholic and Protestant Christians have higher satisfaction in life and they cope better with stressful situations.
If you believe in God, then it’s a no-brainer than you don’t take his name in vain—using it as if it were of no importance or worse, using it to damn something is not respectful of our Lord.

III.  Remember to keep holy the Sabbath day
Going to Church Linked to Better Moods
Who are the happiest people? According to a report from Gallup, the more frequently people attend their church, mosque or synagogue, the happier they are. Churchgoers are especially happy on Sundays while those who don’t go to church on Sunday experience a decline in their moods on that day.

IV.  Honor your Mother and Father

Family Relationships Bring Greater Happiness Than Money
For most people, having strong family ties brings greater contentment than a big income. Researchers tracked 274 married people over a decade, they found that while income did contribute to happiness up to a point, the quality of family relationships was much more important.

V. You shall not kill

Murder is obviously is bad and not the path to happiness so that is not been the subject of a study technically. However, abortion is killing and that has been studied.  Seventy Percent of Post-abortive Women Report Negative Consequences
The New Testament also warns against anger against others. “You have heard that it was said to the men of old, 'You shall not kill; and whoever kills shall be liable to judgment.' But I say to you that every one who is angry with his brother shall be liable to judgment; whoever insults his brother shall be liable to the council, and whoever says, 'You fool!' shall be liable to the hell of fire. (Matt 5: 21-22).
Forgiveness Brings Happiness
Hundreds of studies show how a strong connection between forgiving others and our own well-being.

Study Finds Telling the Truth Improves Health
Honesty may boost your health, suggests a study that found telling fewer lies benefits people physically and mentally.
Each week for 10 weeks, 110 individuals, ages 18-71, took a lie detector test and completed health and relationship measures assessing the number of major and minor lies they told that week, says lead author Anita Kelly, a psychology professor at the University of Notre Dame in Indiana. She presented findings at the annual meeting of the American Psychological Association, which ended Sunday.
"When they went up in their lies, their health went down," says Kelly. "When their lies went down, their health improved."

VII. You Shall Not Commit Adultery

Studies consistently reveal that 90 percent of Americans believe adultery is morally wrong.  Sex outside of marriage has brought us trouble, STD’s; children of divorce suffer in a number of ways and are more likely to divorce themselves.
International Journal of Epidemiology 23 found:
“Life expectancies for divorced men and women are significantly lower than for married people (who have the longest life expectancies).”
The health consequences of divorce are so severe that a Yale researcher concluded that "being divorced and a nonsmoker is slightly less dangerous than smoking a pack a day and staying married." ( Harold J. Morowitz, "Hiding in the Hammond Report," Hospital Practice (August 1975), p. 39.)
"After a diagnosis of cancer happily married people are more likely to recover indicating that the emotional trauma of divorce has a long-term impact on the physical health of the body. (James S. Goodwin, William C. Hunt, Charles R. Key and Jonathan M. Sarmet, "The Effect of Marital Status on Stage, Treatment, and Survival of Cancer Patients," Journal of the American Medical Association 258 (1987): 3125-3130.)

VIII. Thou Shalt Not Steal

The single largest psychological factor found in approximately 1/3 of shoplifters studied is “depression”. Sixty-seven studies all point to unhappiness and emotional problems related to shoplifting. Sadly, recent studies show, Majority think it's okay to steal from work.  Yet, no one would think stealing makes for a better society.

Jealousy over God’s favor led Cain to take Abel’s life.  Saul was jealous of God’s favor for David and the fact that people made a big deal over David’s victory over Goliath. Instead of building up Israel, King Saul wasted time pursuing David to kill him. Instead, Saul met with disaster; committed suicide and his sons were killed by the enemy.
Then David coveted Bathsheba, the wife of Uriah and committed adultery with her. He arranges for Uriah to face certain death in battle and ultimately face many disasters as a result of this sin.


Coveting is not just ancient history. There is no shortage of ways to covet what others have and make yourself unhappy. Several new studies reveal that Facebook makes many people feel bad about themselves, leading to anger and hate against other people. Why? Because of envy and jealousy—coveting what they perceive others have and feeling unsatisfied with their own life.


Is Facebook Making Us Sad? reports that people overestimate the happiness of others and make themselves sad by comparing their lives with others.  Although the temptation to want what others have is not a sin, it is a sin to indulge in the feelings.  The motivation to resist this sin lies in our desire to be happy.  After all, feeling sorry for ourselves while sulking in jealousy or envy is not fun.


Two new books for spring:  Big Hearted: Inspiring Stories From Everyday Families  is a collection of stories on love and life.   Dear God, I Don't Get It is children's fiction that presents faith through a fun and exciting story.
Follow Patti at Twitter or like her Facebook pages at Dear God Books,  Big Hearted Families, A GPS Guide to Heaven and Earth