When Maria Wanchic of Bismarck, ND was thirteen years old, she thought of all the lives lost to abortion and imagined putting up a memorial to represent them as individuals.  “At the time, I thought about crosses,” she said.
That was two decades ago.  This Memorial Day weekend, Maria accomplished her childhood dream to honor the life of each baby lost to abortion in North Dakota.  Volunteers helped her place sixty-six thousand pink and blue flags on the north side of the state Capitol law.  The flags are  a colorful testimony to each life, rippling in the breeze and making the statement, "I was here, I count."


Maria and her husband Eric, spearheaded the event together. Their four children and an army of volunteers helped push flags into the lawn, one by one, remembering baby by baby.
“Every time I put a flag in the ground it represents a person who would have had infinite possibilities if they were alive,” Maria said. “This is not about politics.”  Instead, she explained that it’s about the lives of both babies and their mother’s and anyone who has been hurt by abortion. Carol Kling, who came out to put in flags, had an abortion many years ago. She said in a KFYR TV News report  “I’m post-abortive myself and many years ago when I was twenty-two, I did not realize the ramifications of the pain I was going through until I bottomed out.”   Now, she works with Rachel’s Vineyard to offer retreats for others. “It’s for anyone who is hurting after abortion—any faith or no faith; everyone is welcomed.”
A man, woman and young boy walking by read the banner and wondered aloud,  “What is Roe v Wade?”  Maria expressed surprise and explained that it was the Supreme Court case that made abortion legal in the US.  The woman thought a moment and asked, “So there has been 66,000 abortions in the US?"
"No, that is only in North Dakota,” Maria replied. “There's been 55 million in the entire US since 1973."  There was another moment of silence. The man raised his eyebrows and shook his head. Then the lady picked up a blue flag, gave it to the little boy and said, "Here you go, go ahead and put it in the ground." The little boy put the flag into the ground and looked up at his mommy.  They smiled and said, "Thank you." and continued on their walk.
Another lady walking by asked what all the flags were about. When she learned, she looked around, stunned. "I thought maybe there were 2,000 or so,” she said and began taking pictures of the flags.
Many drivers honked horns; some in approval but others making their disapproval known.  Many walking by, wondered what was going and expressed approval with some even helping out for a time. Others made no comment and just walked away.  The event’s Facebook page 66K Since Roe V Wade reflected the mixed emotions of the community, with some coming to the page simply to attack.  (Please come and “like” the page.) 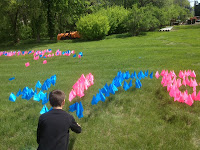 Maria and Eric plan to spread the message around the state using the flags as a traveling memorial.  They also plan to erect a permanent, post-abortive healing memorial somewhere in the state.  NameThem.org is a site they’ve established that is dedicated to the healing of women suffering from post-abortion syndrome. They will assemble a network of professionals in counseling including priests and pastors who will offer help with post-abortion healing. 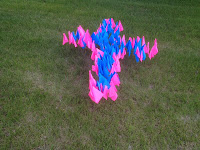 This pro-life flag memorial contrasts with the pro-choice event held at the Capitol the previous month. Abortion supporters, vow revenge against North Dakota legislators for making it the most pro-life state in the nation, including a law that will ban abortions once a fetal heartbeat can be detected.
The event, dubbed, “We Will Remember Your Vote” placed 1,100 white flags on the front lawn of the state Capitol.  Each flag had the name and district numbers of North Dakotans who are against the anti-abortion measures and against voting down a bill that would have made discrimination based on sexual orientation unlawful.  It was delayed a week after Mother Nature dumped a record-breaking 17-inches of snow mid-April, but went on in spite of remaining drifts.

The pro-life event also contrasts with fundraising going on in Fargo this same Memorial Day weekend.  Fargo is home to the only abortion clinic in the state, the Red River Women’s Clinic.  The clinic is taking donations from across the country to help with legal fees to fight the anti-abortion legislation. To help raise money for legal costs, clinic supporters plan a combined fundraising concert and silent auction in downtown Fargo.
In North Dakota, there is just one abortion clinic in Fargo, but it is enough to take the lives of 1,650 per year, or 66,000 people in the 40 years since Roe v. Wade.

Photos by Eric Wanchic.  A beautiful and moving memorial to celebrate the beauty of life. 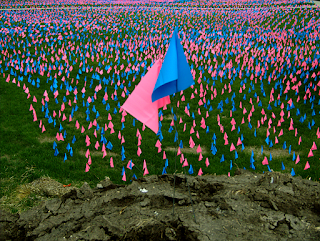 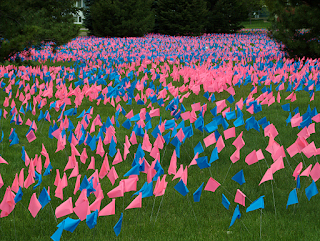