Abortion supporters have vowed revenge against North Dakota legislators for making it the most pro-life state in the nation.  They have promised a legal battle against the new laws and are threatening lawmakers with voting them out of office.
To be sure legislators get the message loud and clear, more than 1,000 little flags were placed on the front lawn of the state capitol this week.
Each white flag has the name and district numbers of North Dakotans who are against the anti-abortion measures and against the rejection of a bill that would have made discrimination based on sexual orientation unlawful. The event dubbed “We will Remember Your Vote” is a silent protest with flags standing sentinel on the Capitol grounds for three days.  They flutter ghost-like in the prairie winds, taunting legislators with revenge at the ballot box.


Thankfully, a majority of our legislators are instead haunted by the 55 million babies that have been aborted in this country so they passed the strictest abortion measures in the United States.  In North Dakota, there is just one abortion clinic in Fargo, but it is enough to take the lives of 1,600 per year, or 66,000 people in the 40 years since Roe v. Wade.
The flag protest was originally planned for last Thursday, April 18, but Mother Nature dumped record-breaking amounts of snow, leaving 17-inch drifts the prior weekend. The event was postponed until this week in spite of the snow that still remains.

Legislative Appreciation Day
Although the pro-abortion organizers say it was just a coincidence, their original protest was planned  to take place the very next day after the April 17 pro-life rally.   On that day, an estimated 500 gathered in front of the Capitol for Legislature Appreciation Day in a show of gratitude to the North Dakota lawmakers for passing the strictest abortion laws in the U.S. during this legislative session.
“North Dakota is second to no other state in our great Nation in defending and promoting the intrinsic value of each person as loved and created by God and able to be a blessing to our society,” said Bismarck, Bishop David Kagan during the rally.
Christopher Dodson, Executive Director of the ND Catholic Conference, said we would continue to move forward in the fight for life. "When they say we are turning back the clock, we will tell them that, that clock was broken 40 years ago,"  he shouted to a cheering crowd.
"What you have done here assists the whole nation in the protection of unborn children," said keynote speaker, Fr. Frank Pavone, national director of the New York based Priests for Life. "The lesson from this state is now echoing from coast to coast.” He praised North Dakota's elected officials for the will to protect the unborn and announced, “Some say it is not the right time, but it is always the right time to do the right thing.”
The group was specifically celebrating that last month, Gov. Jack Dalrymple signed into law, three abortion bills, including the "Heart Beat Law" which bans abortion as early as six weeks, or when a fetal heartbeat is detected. The other measures make it unlawful to abort babies based on genetic defects such as Down syndrome or on the basis of sex, and requires an abortion doctor to have admitting privileges at a nearby hospital. The laws will take effect August 1.
On Tuesday, the day before the appreciation rally, Dalrymple signed a fourth measure that prohibits abortions after 20 weeks of pregnancy. Ten other states have enacted similar laws based on the belief that babies can feel pain by that stage.  State lawmakers also passed a referendum measure defining life as starting at conception, thereby banning all abortions in the state. The measure is expected to come before voters in November 2014.

We Will Remember
The battle for life has turned the ND Capitol grounds into a turf war of sorts with both sides making promises. Proponents of abortion rights vow to “remember” who voted prolife and work to get them out of office. 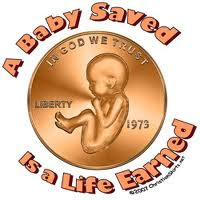 *     We will remember the words of Mother Teresa: “Any country that accepts abortion is not teaching its people to love but to use violence to get what they want.”

North Dakota, hailed as the most pro-life state in the country, became a turf war in the abortion debate this week. Both pro-life and pro-abortion activists held rallies on the Bismarck state capitol grounds; one thanking the governor and legislators and the other threatening to remember how they voted come election time.
This morning at 8 a.m. pro-abortion activists will stage their "We Will Remember Your Vote" rally for the stated purpose of leaving a lasting impression on the legislators before the session ends.  "Let us remember their actions in the next elections so that we can change our future by changing our representation!" their Facebook page states.

We pray, O father, that You will continue to bless all of the efforts we make to defend life and human dignity of the unborn and of their parents.  We pray that those who seek to destroy life will respond to Your abundant graces and change their minds and hearts and turn away from this grave sin and defend and protect all human life and dignity.
Posted by Patti Maguire Armstrong