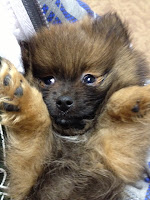 How can you bring love to others? 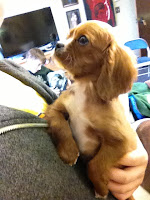 How about puppies?  My kids and I bring puppies to a nursing home every week.  A local pet store lets us pick out two to bring around. It's a day brightener for everyone: staff, residents and us too!
I used to bring our two larger breed dogs--a big golden retriever and a collie mix-- to the Baptist Home nursing home for 7 years.  When our golden retriever died, we added a very affectionate Newfoundland mix named Sophie from an animal shelter.  One man, Arvid, especially loved our dogs. He came alive, excited to hug and pet them. 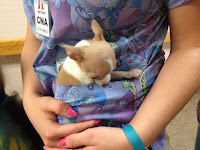 One year, we took a couple months off after I had a baby. By the time we returned to volunteer again,  Arvid's health had deteriorated. Every week we came to visit, he was sleeping.  I always checked his room just in case he was up, but he never was.  Then, one day I peeked into his room and saw him sleeping in a recliner rather than in bed.  Even though he was asleep, knowing how much he loved dogs, I gently tapped his arm. "Arvid," I said, "Do you want to visit with dogs?"

Arvid opened his eyes wide and started laughing when he saw the dogs. He tapped his chest for Sophie to come up on him. Sophie gladly complied. She put her front paws on his chest and laid her head near his. Arvid talked, and laughed, and hugged Sophie. My four youngest children and I looked on, so happy to see Arvid's joy once again. 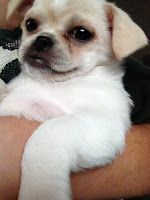 Then, one of the staff members passing in the hallway stopped and looked into the room. She called to the other staff to come quickly, "Come see Arvid!" she said excitedly.  Four employees stood outside his door in awe. Arvid had not responded to anyone in months.  We had no idea until then.  One of the staff members said she was going to start bringing her dog into see Arvid. 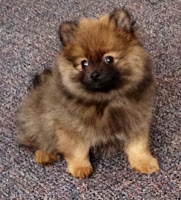 That was several years ago. Those dogs have since died.  Four years ago we switched to the St. Vincent's Nursing Home and asked the local pet store if we could take a couple puppies to visit residents for around an hour and a half a week. They agreed.  Inadvertently, we've sold at least 3 of their puppies--one of them to us.  We have another dog we got from the pound, but most weeks, we just take the puppies from the pet store because they are such a joy to everyone--us included. 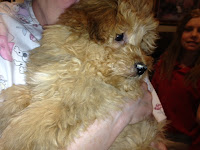 My original goal was to find some kind of volunteer work that I could involve my kids in.  I often remind them that it is an act of mercy to visit the sick.  But like most acts of charity, we the  blessings and love come back to us.

Is there something you do to grow love in your life? I'd love to hear about it. Please share in the comments under this article. It's inspiring and give ideas to others too.

Follow Patti at Twitter or like her Facebook pages at Dear God Books ,  Big Hearted Families, A GPS Guide to Heaven and Earth Her latest books, Big Hearted: Inspiring Stories From Everyday Families    and Dear God, I Don't Get It   are available for order.