(Pro-choice groups are now using this story to promote abortion. Read under subtitle "Spin Doctors" of this article.)

The Media has a penchant for murder, to the point of obsession, often saturating coverage with every little detail.  Curiosity mixed with horror draws large audiences.   Yet there was only localized or pro-life reporting on one of the most horrifying cases in history, which involves body parts, killing of screaming babies, decapitation, and even involving a 15-year old in the killing.
After pro-life and conservative groups led a groundswell of protests against the blackout, there has been some response.  LifeNews.com, which has reported extensively on Gosnell, announced that last Friday, pro-life activists posted on Twitter with the hashtag #Gosnell. In a 12-hour period over 166,000 tweets flooded Twitter forcing the media to cover his trial. This Wednesday will be round 2 exposing the horrors and answering the question Who is #gosnell to the world. Join us for Tweetfest round 2 - Who is #Gosnell?

Network television news stations have chosen to ignore the trial of abortion doctor Kermit Gosnell, 72, which began on March 18. He is charged with the first degree murder of seven babies born alive, and one woman patient. In addition, he is accused of performing illegal, late-term abortions and other horrifying practices at his Philadelphia abortion clinic—dubbed the “House of Horrors.” Eight former employees have pleaded guilty, some to third-degree murder, and one testified to starting there at age 15 through a high school training program, and soon assisting with abortions and administering intravenous drugs.
Gosnell faces the death penalty if he is convicted. The story is shocking and horrific yet was getting ignored outside of pro-life groups.   According to the media watchdog site NewsBusters.org over the past week, ABC, CBS and NBC have completely ignored the Gosnell trial.  NewsBusters reported, “In Gosnell's clinic, police found severed baby feet of various sizes kept in see-through containers and bodies of babies in a freezer and in the basement. The upper spinal cords of some of the babies had been severed. Although Gosnell was charged with eight counts of murder, witnesses have testified he  murdered over 100 babies  over three decades. If true, this would rank Gosnell as one of the top five known serial killers worldwide of the 20th and 21st Centuries by victim count.”
The media silence created a public outcry. Last Thursday, twenty-one leaders in the pro-life and conservative movements signed a statement denouncing national broadcast networks ABC, CBS, and NBC for failing to give any attention to the trial of Gosnell.  Kirsten Power’s USA Today column played a huge role in launching it into the mainstream and admonishing the national political press for ignoring the story. The next day, a call to end the media blackout spread throughout social media and put a crack into the wall of silence.

Why is there a lack of news coverage?  Nationally acclaimed pro-life activist, Monica Migliorino Miller, PhD. author of Abandoned: The Untold Story  of the Abortion Wars, says their silence is revealing. “It is a sad fact that the majority of journalists support legalized abortion,” she said in an interview. “ If they were to pay attention to the Gosnell horror-story--this would bring attention to the scandal of legalized abortion-- and they simply will not allow their unholy sacrament to be touched!”
Miller said that the reporters protect abortion with their silence.  For thirty-seven years, Miller has worked against abortion and seen the inside of courtrooms, jails, abortion clinics, and has experienced firsthand how abortion news is reported on; or rather not reported on.  She is the founder of Citizens for a Pro-Life Society, the co-founder of The Nationwide Rally for Religious Freedom, and an associate professor of religious studies at Madonna University.
In her book, Abandoned: The Untold Story  of the Abortion Wars, Miller revealed the dramatic behind-the-scenes struggles of confronting the culture of death head-on. “One of the reasons that the mainstream media is not covering the Gosnell trial is simply this:  America has gotten used to death, and in particular, the deaths of the unborn in abortion is simply not considered news no matter how horribly they die,” she stated.
According to her, The old hard-boiled news statement-  "if it bleeds it reads" is simply not the case when the blood is that of the innocent unborn killed in abortion.  Even though Kermit Gosnell and his abortion clinic staff are charged with illegal abortion practices-- including the killing of children who were already out of the womb--in a kind of "post-womb" abortion method, Miller questions if our nation should really be so shocked by all of this? 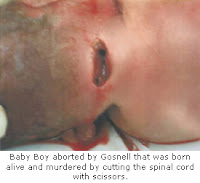 “The law already says that we can kill the innocent--such killing is sanctioned,” she said.  “All Gosnell did was take this sanction to its logical conclusion since there is no moral distinction between killing the unborn before they are born--and slaying them after they have emerged from the womb.”
When Miller lived in Chicago, she helped collect hundreds of bodies of aborted babies from trash dumpsters and arranged for dignified burials. As she shared in her book, she has seen the horrifying reality of abortion and the equal horrifying reality of a culture that turns away and does nothing to stop it.   “Perhaps it's not just Gosnell who should stand trial,” she stated, “but our whole national ethic that needs to be indicted for permiting such killing in the first place."

Spin Doctors
After pressure demanding more media coverage,  the pro-abortion side began to speak out. They've had time to recoup and twist the story into a pro-abortion one.  Ilyse Hogue, president of NARAL Pro-Choice America, spoke to the Huffington Post warning that the Gosnell trial is an example of the consequences of denying women access to safe and affordable abortion care.

"This is exactly what happens when you place undue restrictions and you try to shame women to keep them from exercising their constitutional right to safe and legal abortions," Hogue said. "You make them victims to people like Gosnell, because in their desperation they’ll turn anywhere. You want to drive people like Gosnell out of business? Then you actually support medical facilities and the right of women to safe and legal abortion."  She ended her article with this:  "Kermit Gosnell’s so-called clinic is a peek into the world before Roe v. Wade, and this is exactly what our opponents are driving us to."
Katie J.M. Baker advised on her Jezebel blog that the pro-abortion side had better staring talking about this. “First, it's important to remember no one (besides his lawyer) is on Gosnell's side,” She stated.   But then she want on to state that abortion, if done right, is a safe medical procedure and that  Gosnell is not your typical “brave, caring,” abortion provider.


It’s important to note that the pro-abortion spin doctors are not reporting on the story, but just making comments from afar—very far, as in outerspace. To say this story proves the need for more abortion clinics and to point fingers at the pro-life movement is scary crazy.
The state of Pennsylvania as 22 abortion clinics, some of which offer late term abortions up to 24 weeks.  During the grand jury investigation, Gosnell stated that  "10 to 20 percent of the fetuses [he aborted] were probably older than 24 weeks in gestation."  Those abortions were illegal but the other 80 to 90 percent he did within the law.  The women who went to him had other choices and the ones that went to him after 24 weeks, well you can't blame pro-life advocates for such inability to make a choice.
Every time legislation to regulate abortion clinics come up, it is the pro-choice groups that fight it.  Now, here is a situation where lack of oversight and regulation are to blame.    Pro-choice groups also fight waiting periods, wanting to hurry women through the clinic to abort their babies without getting educational information, or viewing ultrasounds, or being given time to think things through.   In the online documentary about Gosnell's House of Horrors, http://3801lancaster.com, the harsh treatment and repulsive conditions women talk about are mere sidebars. Their deepest suffering is that their babies are dead.life of their babies.

We want pregnant women to be supported and helped so that they will give birth to their babies and not risk possible complications or a lifetime of regrets. This story is far bigger than Dr. Gosnell. It's about life and death.