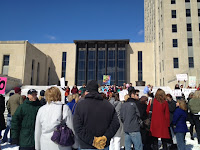 The day before ND's historical victory for life, our little prayer group ventured into an emotional pro-abortion rally.

“Let’s get together today at 2:00 PM  to pray and balance the offensive that will occur  at 2:30 at the capitol.” my friend Isabel texted me.  I decided that praying for the unborn was more important than anything else I had to do that afternoon so I joined her.

The media across the country and even around the world had been watching—wondering if North Dakota would become the most pro-life state in the country.  Three of the four bills passed by the North Dakota Legislature to limit abortions were sent to Gov. Jack Dalrymple that day, Monday, 2/25.  On Tuesday morning, he signed them all. (See details at bottom of this article.)

We have only one abortion clinic in our state, in Fargo. But it is one too many as Senator Margaret Sitte reminded fellow legislators in her floor speech: “Each week in Fargo, 25 unborn persons are deprived of their right to life. That's a classroom of children eliminated every week, 100 per month, 1200 per year, or 50,000 people in these 40 years, enough to populate a major city.”

The wait had been intense. My email inbox filled with forwards to please pray and call the governor to ask him to sign the bills.  Prolife legislators even received death threats. 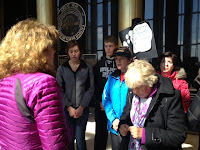 At 2:00, under a sunny sky, not quite warm enough to start melting the spring snow, around twenty of us formed a circle, kitty-corner from the capitol building. We took turns voicing intentions, and then prayed a rosary. By 2:20, we were done.   Now what? we wondered.  Should we go into the capitol building and find the protestors?  But then what?

Our rag-tag army of prayer warriors ventured into the capitol.  No one knew where the protestors were gathered.  Then, we heard voices drift down the stairway from the second floor Memorial Hall.

Ascending to the hall, we beheld around 250 pro-abortion protestors clutching signs painted with the usual messages:  “My Body, My Choice, Don’t Return to Coat Hanger Days.…”  There were children around also holding signs. Their parents must have gotten them out of school.

I have prayed outside of abortion clinics before with angry obscenities occasionally flying from passing cars, but this was different.  An angry pro-abortion crowd is scary.   And here we were, timidly walking towards it.  Isabel led the way and held up one of the two little signs we had: “A Person is a Person, No Matter How Small.”  Isabel is a small but feisty woman from Mexico. Her accent is as noticeable as her enthusiasm for life.  “Our Father who art in Heaven,” she began to pray, boldly before the crowd. We all joined in, standing beside and behind her. 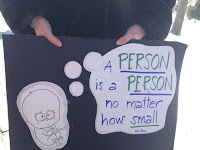 Another member of our group, John, with his wife, Suzanne at his side, said to us, “We don’t need to cower against the wall.”  So, we walked up on the floor and continued to pray.  Clearly, we had surprised them all. No one was expecting us.  We were not even expecting us, and we had no game plan. Praying seemed like the right thing.  I was proud of the two teenagers in our group--a brother and sister--holding up the second sign high over their head. My 11-year-old son stood next to them. Several TV cameras rolled and reporters took notes. One man tried to cover Isabel’s sign with his own, but she would have none of it; outmaneuvering him until he had to leave her alone or look foolish.

Then, it was time for several speakers to take turns rallying the crowd. A woman who had miscarried twin girls spoke tearfully. Aborting the babies, she said,  had been an option she considered upon learning of her high-risk pregnancy, (two babies, one placenta). Nature took its course and she did not have to make that decision, but her point was that it was her decision to make. Ironically, John and Suzanne had also lost twin girls; one in utero and the other, disaabled, lived to be 4 years old.  It was surmised that the surviving twin had suffered a stroke due to the miscarriage of the other.  John and Suzanne had loved and cherished their daughters and only grew more vehement in their respect for life.

A grandmother got up and praised her daughter and insisted her, “two, handsome grandsons” come up to the podium with her.  She made a big deal out of her grandsons.  How odd at a pro-abortion rally to gush over children—at least the ones lucky enough to be born.  The crowd was speckled with children and the speakers spoke of children. How could they be so disconnected to make a big deal out of only some children and defend the right to kill others?

Our little group, so outnumbered, behaved boldly and occasionally shouted things out. One of the times when children was mentioned, Shelly shouted out, “What about the 55 million that have been aborted?” At times, we booed.  Isabel decided that since the crowd was all pointed in one direction looking up at the speaker, it would be a good idea to turn around (we were near the front) and hold her sign over her head again for all to see. A husky and angry looking lady started to push her aside. Isabel stepped aside and kept her sign up.

After around 20 minutes of speeches, the crowd moved outside to continue their rally on the steps of the capitol. (It was planned; we had not chased them out there.) Our group began to pray again. One lady with kids looked disgusted at us and said to another lady, “Let’s get out of here. I don’t want my kids around these people.” 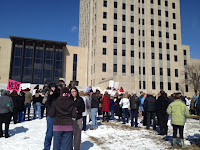 The cameras and rally moved outside. We stayed off to the side and did not interact with the crowd further.  That is when members of our group were interviewed by both local TV stations and by a newspaper reporter.  The pro-life side was expressed eloquently on both TV stations that evening.

"I'm hoping that these bills go forward.  I'm very, very excited for our state.  We could be the Frontier State,  moving forward for all women and children so that everyone knows the dignity of all human life, to be loved and respected from conception to death," Shelly said.

Referring to the governor, Isabel said, "Now he has the opportunity to make the change, to stand for life, and that's priceless, that's absolutely priceless."

John spoke of their twins they had lost but had loved and cherished. He shared that his daughter who had lived to the age of four, had touched the lives of many others.

No one in our group felt anger at the pro-abortion protestors—just sadness for them.  They were clearly convinced that they were right. Flaunting children and portraying themselves as child-lovers, they did not see the disconnect that it really isn’t choice they are talking about, but babies.  And even though we were greatly outnumbered, we were glad we had come.  Our prayers were big and our voices strong. If we had not come, there would not have been a pro-life viewpoint on the evening news. Maybe our presence and our prayers had touched some that day.


I have signed HB 1305 which would ban abortions performed solely for the purpose of gender selection and genetic abnormalities.


I have signed HB 1456 which would ban abortions after the detection of a fetal heartbeat.   Although the likelihood of this measure surviving a court challenge remains in question, this bill is nevertheless a legitimate attempt by a state legislature to discover the boundaries of Roe v. Wade.  Because the U.S. Supreme Court has allowed state restrictions on the performing of abortions and because the Supreme Court has never considered this precise restriction in HB 1456, the constitutionality of this measure is an open question. The Legislative Assembly before it adjourns should appropriate dollars for a litigation fund available to the Attorney General.


I have signed SB 2305 which requires admitting and staff privileges at a nearby hospital for any physician who performs abortions in North Dakota. The added requirement that the hospital privileges must include allowing abortions to take place in their facility greatly increases the chances that this measure will face a court challenge. Nevertheless, it is a legitimate and new question for the courts regarding a precise restriction on doctors who perform abortions.

The Legislature has also passed a resolution that will let North Dakota voters decide on a statewide ballot in 2014 to change the state constitution to prohibit abortions by adding, “The inalienable right to life of every human being at any stage of development must be recognized and protected.” The sponsors hope the resolution could ultimately help overturn the U.S. Supreme Court’s Roe v. Wade decision.
_______________________________