We never officially said "yes" to taking in a boy from Kenya, but had promised to pray about it. One thing led to another and in the end, many lives were changed.
Calvin’s coming to us was an amazing answer to his seemingly impossible prayer.  Years earlier, he had read a book about a boy who left Kenya to go to school in the United States.  ”Maybe I could go there someday,” he dreamed and prayed, “Dear God, please let me go to the United States.”
Calvin prayed with the faith of a child, even though long ago, at thirteen, his childhood had been lost.  Both his parents had died of AIDS, leaving Rogers, 15, Calvin, 11, and Joash, 8, among Kenya’s 650,000 AIDS orphans.  When Calvin revealed his prayer to his older brother and an aunt, they laughed at him but he kept praying.


Missionary Friend
Evan Beauchamp, a missionary for the diocese of Bismarck, North Dakota arrived as a teacher at Calvin’s school.  He learned of the boys’ hardships and invited Calvin to live with him during the week and then return to help his brothers on weekends.  Calvin kept asking Evan to take him back to the United States.  Since Evan was seventy, he knew the U.S. State Department would never agree to such a scenario.
When Evan was back in the United States for sabbatical, he asked my husband and me if we would take Calvin in.  We initially said no because we could not afford to care for one more.  Evan suggested finding donors that would pay Calvin’s expenses.  Our response was that we’d pray about it.  Calvin did not even have a birth certificate so we thought the odds were good it would never come down to that anyway.  We needed legal guardianship for Calvin to be covered by insurance; St. Mary’s high school had to agree to accept him at no charge... there were a number of obstacles to overcome.  When everything eventually fell into place, we accepted it as God’s will although not without a certain amount of trepidation.
Nine years ago Calvin stepped off the plane and became a much-loved member of our family. After he'd been with us a week, he share with us his prayer to God in the face of seemingly impossible odds. At that moment, we realized we were privileged to have been chosen to answer his prayer. He graduated with a degree in respiratory therapy from University of Mary and is in medical school at Saba Medical University.  (pictured above with Evan on left and then UMary President Sr. Thomas Welder.) He plans to eventually return to Kenya to help the poor.  He has been a wonderful son and sibling to our family.  But when we said yes to Calvin, there was more to come.

Calvin's Little Brother
A year after Calvin’s arrival, Chuck and Tip Reichert, one of the couples helping to support Calvin, took him back to Kenya for his brother Rogers’ wedding.  Tip, the mother of seven who had also fostered seven more, was drawn to Joash, Calvin’s younger brother.  “He looked so lost,” she told me.  ”He needs a mother.”

During his senior cross-country season, Joash broke every course record but one where the course had been changed. We suspect it was so he would not break the previous record set by a hometown boy.   In his senior year,  he competed in the Nike National race in Portland, OR and came in third with a time of 15:18 against 199 of the fastest runners in the country.
The boy who came here struggling with school, received a running scholarship to the University of Portland.  He's had some injuries but is coming along and has earned Academic All American.
We are an imperfect family so I share this story for one reason--to encourage hearts to open when God calls.  He has blessed us beyond measure and I pray that he will lead us all closer to him.
(To watch the actual Dec. 6, 2008 Nike National race you can go to the website:http://www.runnerspace.com/video.php?do=view&video_id=7960) 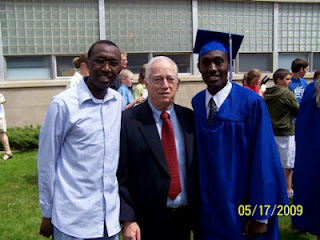 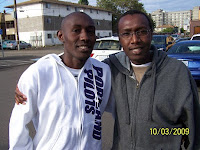