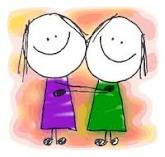 When I was collecting stories for the Amazing Grace for Survivors book, I came across this heart warming story by a friend of a friend who was  born blind. Here is her story.
I suppose Melissa would be called a child in a PVS state these days.  About fifty years ago, a  professional called children like her "vegetables" because they couldn't do anything for themselves, and the phrase unfortunately stuck.  Today, PVS stands for "persistent vegetative state."

Melissa was certainly not like the other children in the station wagon which picked us disabled kids up from all over Oahu, Hawaii,  including the outlying areas around Honolulu to take us to our respective schools.
There are degrees of disability, and the prejudice between these degrees can be sharper among the disabled than they are noted among "normal people."  The struggle to be considered as "normal" as possible can be a vicious, even cruel yoke.  "I can play catch," a nine-year-old boy with hemophilia said, risking the easy breakage of his bones and bleeding which may be hard to stop in order, just for a while, to feel like an ordinary kid.

"I can roller skate faster than my sister!" said Dawn, who had practiced for months, and counted the bruises as nothing just so long as her total blindness wouldn't stop her from roller skating not only well but faster than her sister.

But Melissa did none of these things.  She was on "the bottom" of the disability pyramid.  Those who are thought to be, on the bottom are the little ones which people let technology weed out by saying: "Isn't it wonderful we can perform tests now in the mother's uterus that reveals disabilities so it can be terminated?"

But someone loved Melissa.  Every day, her mother lovingly put her into the car and kissed her goodbye.  Melissa sat next to me day after day.  She never said a word, or reacted in any way to anything that happened around her.

We were picked up in the morning and driven to our different schools. I went  I to the school for the deaf and the blind. But Melissa went to a school where very little could be done for the children.  Their disability seemed too great.  Playing with colored balls, watching for reactions to see if things might be going on in those poor brains, trying to stimulate any response at all -- were great steps forward.

I am ashamed to tell you this, but many times I said: "I'm not one of them! I can count and talk and sing and ...  and do lots of things Melissa can't do!" What I was really saying was: "I am not so disabled as Melissa, so I am more of a person than she is."

At the root of all this was fear.  What if I couldn't be ‘normal" no matter how hard I tried?  What if other people would not want my love because I am disabled?

Melissa and the younger children and  I sat in the front part of the station wagon.  In back sat older kids, mostly deaf children.  They had fun playing games with us younger ones, especially taunting the blind children, since of course we did not know who had hurt us.  I know our kindly driver, Mr. Mayo, felt badly about all this, but it was hard for him to drive and attend to the craziness going on behind him at the same time.

One afternoon, one of the deaf children took a large wad of gum and smeared it through my hair.  This was followed by very hard hair pulling.  I screamed in pain.  Mr. Mayo had not seen who had done it, and the laughter of the gang behind me frightened me.  I began to cry hard, shaking and trembling.

Suddenly, two little arms were around me.  A little hand touched my cheek.  The little hand stroked my hair and cheek, and the little child who sat next to me day after day, nothing more than a "vegetable" to those pseudo-professionals, was rocking me in her arms. It was Mellisa. I was so amazed that I stopped crying.  This went on for about three minutes, and then, gently and tenderly, she touched my hair and cheek again, and went back into her own little world.  I think the kids behind us were also amazed, because there was silence back there too.

When I had pulled myself together, I gently put my arms around her too, and we stayed like that for a long time.  Every morning and afternoon that followed during the time we were together, we put our arms around each other again for a little while.  After this, all disabled people became my people, and the hierarchy of disability no longer existed for me.

Melissa taught me that all people, especially the most disabled, will always be my people. Quality of life criteria is nothing more than an evil way to justify killing unwanted people.  I learned that if only one person is denied his or her humanity, none of us are safe, and none of us are "human."


Patricia Margaret Devlin was born in Hawai'i in 1953 before it was understood that varying levels of oxygen could destroy retina tissue and cause blindness.  She was one of the many infants of this time who became blind as a result.  Despite serious health problems, she worked, went to school almost getting her doctorate, and raised her twin daughters alone.  She  is fighting her second bout with cancer, and through God’s grace finds purpose in  offering her chronic pain for others