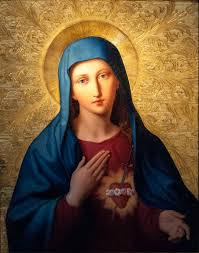 There is a lot to fret over in our culture but there is also a lot at our disposal to fight against it. One very powerful action we can take is the First Five Saturday devotion. If you have never done it before, I encourage you to do it now and stick with it.  The promises are powerful and the need is great.

The Five Blasphemies
Consider all the violence and images of Our Blessed Mother's statues getting burned and broken as testimony to the great need for this devotion. Our Lord revealed to Lucia, after she became a nun, that there are five ways in which people offend and blaspheme against the Blessed Mother.
1) Against her Immaculate Conception.
2) Against her virginity.
3) Against the Divine Maternity, while refusing to receive her as the mother of mankind.
4) By those who publically implant in the hearts of children indifference, disrespect, and even hate against the Immaculate Mother.
5) By those who insult her directly in her sacred images.

The Great Promise
Our Lady told Sr. Lucia that she promised to assist at the hour of death with all the graces necessary for salvation all those who, on the first Saturday of five consecutive months:
1. Receive our Lord in Holy Communion while in the state of grace.
2. Recite five decades of the Rosary.
3. Keep Mary company for at least 15 minutes while mediating on the mysteries of the Rosary.
4. Go to Confession within the month.

This information was taken from the book Spiritual Guide for the Salvation of Souls and World Peace.
~~~~~~~~
For more inspiration check out Patti's latest book: Holy Hacks: Everyday Ways to Live Your Faith & Get to Heaven. Other books include:  Big Hearted: Inspiring Stories from Everyday Families and the best-selling Amazing Grace Series.
Follow Patti at Twitter and Pinterest, like her pages at Holy Hacks, Dear God Books,  Big Hearted Families,  Catholic News & Inspiration on Facebook, and her author Facebook page.  To receive articles in your inbox, enter your email in "Feedburner" in right column.   God bless you!
Posted by Patti Maguire Armstrong