Help Souls in Purgatory and be Helped by Them 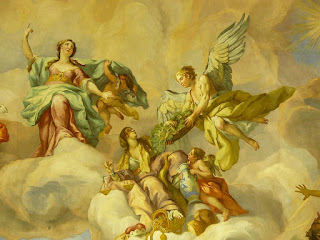 God is behind every miracle and every answer to prayer, but he made us a family that interacts and can help each other.  When Jesus walked the earth, he taught us to pray for one another. That desire does not end when someone dies.

Again and again, God gives us more than we deserve and more than we can earn on our own. Praying for the souls in Purgatory is one of those opportunities to give, grow in holiness, and receive help in return.

Scripture supports praying for the dead. In 2 Maccabeus, Judas Maccabees and his men came across the bodies of their fallen comrades. Judas immediately “turned to prayer, beseeching that the sin which had been committed might be wholly blotted out.”

Judas Maccabees, lived about 160 years before Christ, believed in the resurrection and that his prayers could help those who had died. “Therefore he made atonement for the dead, that they might be delivered from their sin.” (2 Maccabees 12:45).

[Note: Macabees is one of the seven Deuterocanonical books that Martin Luther removed from the Bible. Those books speak of prayer and sacrifice for the dead and other passages which contradicted Luther’s new doctrines of justification by faith alone and sola Scriptura. The Catholic Bible has the full, original 73 books and the Protestant Bible only 66.]

The New Testament echoes this devotion in the second letter of Timothy when Paul prays for someone named Onesiphorus who died, saying: “May the Lord grant him to find mercy from the Lord on that day.”

The Catechism of the Catholic Church teaches: “All who die in God’s grace and friendship, but still imperfectly purified, are indeed assured of their eternal salvation; but after death they undergo purification, so as to achieve the holiness necessary to enter the joy of heaven” (CCC 1030). We are encouraged to pray for them:  “Our prayer for them is capable of not only helping them, but also of making their intercession for us effective,” (CCC 958). Writings on the tombs of early Christians buried in the Roman catacombs also attest that the dead were prayed for.

Throughout the ages, saints and mystics have reported encounters with souls in purgatory. The Mystics of the Church website, has amassed large number of these eye witness accounts. Here also are a few summaries from Stories of Purgatory, at the Devotion to Our Lady website.

St. Margaret of Cortona had a great devotion to the holy souls. It is related, in her biography that, at her death, she saw a multitude of souls, that she had delivered from Purgatory, form in procession to escort her to Paradise….This servant of God, wrapt in ecstasy at the moment when Margaret departed this life, saw her soul in the midst of this brilliant cortege, and on recovering from her rapture she related to her friends what our Lord had been pleased to manifest to her.

St. Philip Neri, confessed that many of his spiritual children appeared to him after their death, either to ask his prayers or to return him thanks for what he had already done for them.  He declared also that by this means he had obtained more than one grace.

“There is no doubt,” says the devout Father Rossignoli, “that on their entrance into eternal glory the first favors which they ask of the Divine Mercy are for those who have opened to them the gates of Paradise, and they will never fail to pray for their benefactors, whenever they see them in any necessity or danger. In reverses of fortune, sicknesses, and accidents of all kinds they will be their protectors. Their zeal will increase when the interests of the soul are at stake; they will powerfully assist them to vanquish temptation, to practice good works, to die a Christian death, and to escape the sufferings of the other life.”

Cardinal Baronius, whose authority as an historian is well known, relates that a person who was very charitable towards the holy souls was afflicted with a terrible agony when on her deathbed…when suddenly Heaven seemed to open before her eyes, and she saw thousands of defenders fly to her aid, reanimating her courage, and promising her the victory. Comforted by this unexpected assistance, she asked who were her defenders? “We are” they replied, “the souls which you have delivered from Purgatory; we, in our turn, come to help you, and very soon we shall conduct you to Paradise.” A short time afterwards she tranquilly expired, her countenance serene and her heart filled with joy.

Here also are modern day reports of help from the souls in purgatory, collected at Mission Bell website.

Imagine a soul’s euphoria when they leave the prison of purgatory, a place of reparation for sin,  to enter heaven. We cannot comprehend such a moment, but we can have the joy of partaking in God’s mercy. They will not forget us or cease praying for us in return.

For more inspiration check out Patti's latest book: Holy Hacks: Everyday Ways to Live Your Faith & Get to Heaven. Other books include:  Big Hearted: Inspiring Stories from Everyday Families and the best-selling Amazing Grace Series.
Follow Patti at Twitter and Pinterest, like her pages at Holy Hacks, Dear God Books,  Big Hearted Families,  Catholic News & Inspiration on Facebook, and her author Facebook page.  To receive articles in your inbox, enter your email in "Feedburner" in right column.   God bless you!
Posted by Patti Maguire Armstrong