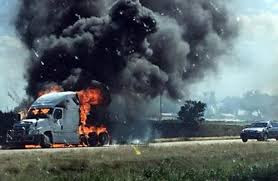 Does anyone wake up and think they will be a hero that day? But there are defining moments when heroism presents itself without no warning. Chet Czubko experienced such a moment on the morning of October 20, 2003.


Czubko and his wife both worked in Lansing where their two boys also went to school. His wife had left with the boys and he was headed into work a little later. Suddenly, there was a loud crash just behind him. “To my horror I saw a semi-truck with flames shooting about fifty feet into the air headed directly towards me,” he said. “It came to a violent stop twenty to thirty feet behind my vehicle.”
He immediately called 911 and learned others had already called. Emergency responders were on their way, so it seemed there was nothing more he needed to do. Do I keep driving to work? he wondered.  He was an accountant, not a doctor, so he told himself there was no reason to stay. No, I need to see if there’s something I can do to help,he decided.
Czubkopulled his car to the side of the road then walked towards the crash.  People ran around as flames shot up from the crash of the semi. “Getting closer, I saw that there was more than just the semi involved,” he said. “The big truck had smashed into the back of a suburban. From twenty feet away from the wreckage, I felt an intense heat radiating as flames shot out of the window of the suburban.”
“Help me!” a desperate scream came from the vehicle.  There was a man trapped inside with the upper half of his body hanging out of the shattered window.
“His eyes looked right at me as he screamed: ‘Help me!’  Flames were shooting out from behind this poor man,” Czubko explained. “Two men had just given up trying to pull him out of the car, and everyone in the area looked on in a hopeless despair.  Some people were trying to put the flames out with fire extinguishers, but I could see from the immensity of the flame that such action would be as futile as trying to chop down an oak with a butter knife.”
Czubkonoticed that the door seemed slightly ajar. Could they rip it off? He yelled for someone to get a chain. A few seconds passed like hours as a man walked forward holding a chain he had retrieved from a trailer.  Some people were spraying fire extinguishers.
His first attempt to loop the door with the chain missed. Time was wasting!  A man’s life literally burning away. Czubko tried again and succeeded. The man was losing consciousness, but it was not possible to get close enough to the vehicle without also becoming a victim to the flames.
“With the chain looped around the door I took both ends and began to pull with everything I had,” Czubko explained.   Two men appeared beside him and began helping and pulled it open. Two others ran up and were able to drag the victim out onto the interstate.
Most of his cloths had been burned off and the remains of his shirt were still aflame. Someone put it out with a fire extinguisher.  One man bent down to the head of the burned victim and started consoling him.Czubkoremembered from a CPR class that water was most effective in treating burns. “Does anybody have water?” he yelled.  A woman emerged with a wicker basket filled with water bottles.
As he administered the water, an ambulance arrived two-hundred feet from where the man lay.  Czubko sprinted towards it and yelled for them to come this way. Then, he stood back as they took over.
“I found myself in a group of several men—other men who had helped with the chain and dragged the man out of the car.  We formed a silent circle; any possible words were swallowed up by raw emotions.”
Only later did Czubko realize his forehead was burned. He agreed to go to the hospital and found out he had second-degree burns. As he was being bandaged up a doctor came in and shook Czubko’s hand. “I wanted to shake the hand of a hero,” he said.  Czubko was shocked, not for a moment considering himself a hero.
Later, his wife and parents asked him why he had put himself in danger to help. He considered their question and realized the danger had not occurred to him. “All I was thinking was that if that had been me in the car, I would have wanted someone to be there to try his or her best to help me.”
Czubko was also interviewed by the local news and received the American Red Cross’s award for Everyday Heroes.  He later learned that 80% of the victim’s body had been burned and eight months later he passed away. “I was glad that through my efforts and the efforts of others, he died peacefully in bed rather than in that terrible inferno,” Czubko said. “I was most touched by his mother who called me her angel. 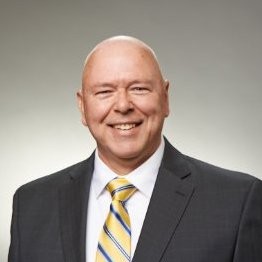 “Having been a Catholic my whole life I’ve always had an appreciation and reverence for life in all its stages.  It’s humbling to realize that if I had left for work that October morning mere moments later, it likely could have been me trapped inside those viscous flames.  The frailty of life is sometimes a hard fact to accept, but mostly it makes us appreciate every moment that we have with out family and friends knowing that at any moment God may call us home.
“I’ve also come to realize that a hero is not always some superhero figure who rescues people from danger on a daily basis.  No, a hero is someone who loves life and when the opportunity to help someone continue living is presented, he will do everything in his power to preserve life.
Chet Czubko’s story was included in the Amazing Grace for Survivorsbook. He and his wiferetired this past April, are doing some traveling and “really enjoying each other’s companionship,” he said. “I consider every moment shared with family/friends extremely precious, directly attributable to that experience.”
~~~~~~~~
For more inspiration check out Patti's latest book: Holy Hacks: Everyday Ways to Live Your Faith & Get to Heaven. Other books include:  Big Hearted: Inspiring Stories from Everyday Families and the best-selling Amazing Grace Series.
Follow Patti at Twitter and Pinterest, like her pages at Holy Hacks, Dear God Books,  Big Hearted Families,  Catholic News & Inspiration on Facebook, and her author Facebook page.  To receive articles in your inbox, sign up at the right column. Thanks for stopping by.  God bless you!
Posted by Patti Maguire Armstrong