How the Devil Uses Religion 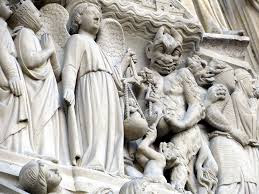 Only a sliver of a fraction of people are attracted to evil for evil’s sake. The rest are fooled. Cunning is the devil’s game.
It is in the murky margins outside of religion where religious folks, or those who are “just spiritual,” imagine they are following a greater god. Every rebellion against the one, holy, Catholic and apostolic Church is done under cover of improvement. It doesn't work that way. I’m not saying non-Catholic religions are evil; I’m saying evil is alway afoot when rejecting truth.


Black Masses are the epitome of the devil using religion to rage against God. It is validation that the Catholic Mass is the target since the devil knows which church has the truth. He is not always so blatant, however.  Below are less obvious ways that the devil fakes religion.

False Apparitions
Church approved apparitions offer inspiration from heaven. The Sacred Heart of Jesus, Divine Mercy, Fatima, and Lourdes with instructions for holiness can advance a soul. Yet devoted Catholics convinced that a false apparition is from God, sometimes choose the apparition over Church authority.
The authority to rule on apparitions belongs to the Church which looks deeper than mere trappings. The article, How to Tell True Apparitions From False explains that one is a great good; the other a grave danger.
In his book on Catholic mysticism, The Graces of Interior Prayer: A Treatise on Mystical Prayer, Father Auguste Poulain stated: “False visions usually begin with great promise. But once convinced, followers imperceptibly veer off little by little and often rebel against Church authority if there is a negative ruling.”
We should trust Church authority when it rules on apparitions, even if only out of obedience.  If 99% of the messages conform to Catholic teaching, it is the 1% that does harm. The devil appeals to piety and then subtly plants errors landing his victim in the wrong direction.

Clergy Supporting Abortion
Every now and then clergy gather to praise abortion or bless a facility as they did two months ago blessing a clinic in Fort Worth, TX and last Janurary in Washington D.C., opening a place of abortion and calling it 'sacred work.'
In the article Blessing Abortion Clinics? "You Can't Call Upon God to Destroy Human Life" the designated exorcist for the archdiocese of Indianapolis Fr. Vincent Lampert, explained that such claims are contrary to God.  “God is Prolife,” he said. “The notion that we have the power to manipulate God is ridiculous. When we pray, God changes us; we don’t change him.”
According to  Fr. Mitch Pacwa S.J., Bible scholar and President/Founder of Ignatius Productions and TV/radio host of EWTN Live: “If they hold an imitation of prayer in order to promote evil, then they belong to the father of lies.”
Individuals and organizations with religious titles that support abortion, likewise, are not from God. For instance, a group called Faith Aloud advertises free clergy counseling for pregnant women looking for compassionate religious and spiritual support. They tell women: “We will not burden you with moral judgments.”
If that isn’t a message straight out of hell. As Irish Archbishop Eamon Martin explained  recently, abortion is “always evil and can never be justified.”

Other Anti-Catholic Stances
Clergy advising against any Church teaching, even if they actually belong to the Church, are rebelling, not representing. It was Lucifer who rebelled.

New Age
Looking for power outside of God is not power from God. There is no “white magic” or tapping into the power of nature or ancient spirit guides.  It’s all the devil.
Do not look to people engaged in the occult who seem nice or are even Catholic either. For instance, Susan Brinkmann at Women of Grace  warns against Teresa the Long Island Medium, who says she is Catholic and has a reality show based on supposedly channeling deceased spirits.

“..you are looking at one of the most effective ruses of Satan – a ploy even the Bible warns us about – to appear as an “angel of light” (2 Cor 11:14). And he can do this with even the most well-meaning people, especially those who are actively engaging in the occult arts, such as what the Long Island Medium is doing.

“Teresa may consider herself to be a Roman Catholic, display statues of Mary on her front lawn, and even attend Mass regularly, but there is nothing Catholic about what she’s doing – consorting with spirits who masquerade as the dead.”

Truth Does Exist
How do we stay clear of so much cunning?  Exorcists will advise
to pray and stay close to the sacraments..  Seek humility to protect against the pride of desiring to be an insider of information or possess special powers.
Read the Bible and good Catholic books and media and rely on good Catholic news sources. I use several sources and am a big fan of The Good News, for daily summaries that gives a Catholic perspective.


Don’t waste time with sources playing the devil’s advocate, allowing debate against Catholic teaching.  Stick with those who advocate for God.