The Disconnect of Women Priests

Dear Ladies of the Church of England, purple isn’t your best color. Neither is black but that didn’t stop some of you from putting on black shirts and Roman collars when your church ordained the first female priests twenty years ago.  And as of last July, church ladies can order ready-to-wear clergy attire in bishop’s purple since approval was granted for women to become bishops.  Rev. Libby Lane did just that last month, donning purple as the first female bishop in the Church of England.

The Church of England, the mothership for the Worldwide Anglican/Episcopal Communion, was among the last of the group to agree to women ordinations in 1992.  The trendsetter in 1975 was the Episcopal Church of the USA.  Then, like dominos, other member churches fell until finally, the Church of England took the plunge too—further away from their Christian roots.

Sticking with the Vine
In the Catholic Church, we stay rooted in Jesus because he is the vine and we are the branches—not the voting body. Voting about truth is a departure from tradition, lest one speaks of the tradition of heresy.  But the brave new world in jolly old England ignores tradition.  At the Church of England’s General Synod last summer, only around 30 of the 480 people present voted against changing canon law.
To those 30, I say: come home to the Catholic Church where the teaching is apostolic.  Our last two popes have simplified entry into the Church for traditionalist Anglicans. Many uncomfortable with female priests and openly gay bishops have already joined while retaining many of their former traditions.

Fr. Dwight Longenecker is an example of this.  He is a former Anglican minister who entered the Roman Catholic Church in 1995 alongside his family.  He serves now at Our Lady of the Rosary Parish in Greenville, South Carolina in addition to writing and speaking.  In his conversion story, he explained that he looked for Jesus in his body because St. Paul taught that the body of Christ was the Church. “But if my church was simply a gathering of people like myself, and Jesus was a reflection of ourselves, then we were only serving ourselves not him,” he said.  “I began to see that Anglicans worshipped a very Anglican Jesus and that was not a complete Jesus.” Ultimately, Fr. Longenecker found that through Catholic roots, he could share in a Christian experience that transcended self to a Christ that was personal, historical, and universal.

Catholic Unity
Allowing women priests is causing divisions in the Church of England and larger Anglican/Episcopal community. It has been blamed for their declining numbers.
By contrast, Catholics not ordaining priests is causing no division at all. Yes, there are rebels in the pews—or more often not actually in the pews on Sundays.  Aside from the rancor and rumblings they cause within earshot of the secular media, the rebels have no sway. None.
Catholics don’t take votes to psychoanalyze a modern Jesus.  Our hierarchy keeps on keeping on with the early Church.  Call us unprogressive, but Catholics are not going to one up Jesus. Oh, some try, but other than a bit of media gawking, it never amounts to anything. For instance, this month, Georgia Walker announced she became the first Catholic woman priest of Kansas City.  Reporters, that know darn well she can’t be a Catholic priest, gave her the attention she craved.

Pretend Priests
The Church’s Canon Law 1024 says only baptized Catholic men can become priests but Walker claims she is now a priest.  Regardless, the 67-year-old woman had a pretend ordination by fake Bishop Bridget Mary Meehan who claims she has ordained around 130 women in half a dozen countries. 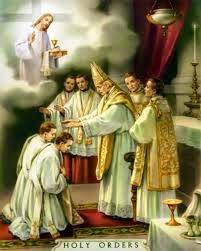 The Vatican’s Congregation for the Doctrine of the Faith issued a decree in 2008 stating that women who attempt to become priests would be automatically excommunicated. (Note to Walker: not only are you not a priest, you aren’t even Catholic, honey.)  Pope Francis also reaffirmed this law in 2013, stating that the door to women’s ordination has already been closed. Amen.
The Huffington Post quoted Walker as saying: “What the official church does to me is not relevant.”  According to her, all the Church can do is deny her the sacraments but now that she is a priest she can provide her own sacraments.  Well, okay then, the psychosis is complete.
Mother Teresa made this observation to an Indian journalist in 1984,  "Nobody can be a better priest than Our Lady, and she remained only the handmaiden of the Lord." There are over 2000 years of unity among the Bishops on a male only priesthood, beginning with the 12 male apostles.  Ample historical evidence explains Why Women Can't be Priests. Ah, but I don't think such evidence holds sway with ladies demanding entry into the priesthood.  They are too strong willed to listen and it's not the will of God they are after but their own.
________________________________________________
For more inspiration, check out Big Hearted: Inspiring Stories From Everyday Families. Your children will laugh while learning big spiritual lessons with Dear God, I Don't Get It! and Dear God, You Can't Be Serious.