Baseball unified this father and daughter in this world and became a connection between them in the afterlife.

As third base coach for the Pittsburgh Pirates in 1992, I was at the top of the world.   Although it was only March, it was obvious we had a strong team and could expect a winning season.

But with one phone call, my world suddenly shattered.  “Dad, I have something to tell you,” my seventeen-year-old daughter, Amy, began.  “Don’t be mad at me.”

With an opening like that, a hundred possibilities crossed my mind:  she wrecked the car, drugs, pregnancy, bad grades, ......  “What is it?” I asked, impatient for the bad news.

“Sorry? What do you have to be sorry for?” I choked into the receiver.
But that was Amy.  She was thinking about her Dad rather than herself.

As the only girl among three brothers, Amy grew up to be one tough kid.  When she was little, she loved to have me ask her: “Where do you want to go today?”  Then, wherever she answered, I’d throw her giggling across the room onto the bed followed by the inevitable plea of, “Do it again, Daddy!”

But underneath her softly freckled face and strawberry blonde hair beat a heart of gold.  Often I came home to find our garage full of neighborhood children playing school with Amy. She loved kids and dreamed of being a school teacher one day.

My season with the Pirates was bitter/sweet that year. Her mother and I were divorced years earlier but Amy and her brothers, Bubba, Mike and Tim, usually spent the summers with me. That year, her illness and chemotherapy weakened her so much that she needed to stay home in Arlington, Texas.

Still, we talked often.  Amy was my number one fan. Baseball meant a lot to her because it meant a lot to me. Even though she could not come to the games, she decorated the house with orange and black pom poms, wore Pirate t-shirts and watched the games on television.  We missed each other so much.

When the Pirates won the National championship that year, Amy flew out to attend the fifth game of the playoffs with the Atlanta Braves.  It was not easy; her body weakened from chemotherapy, her head bald, but she was still full of life as she cheered enthusiastically.  Winning this game was the icing on the cake of having my number one fan there.

After the game, Amy leaned over while I was driving the car and asked, “Dad, when there’s a man at second and you get down in your stance and cup your hands, what are you telling him?  ‘Chicken runs at midnight?’”

I laughed so hard I almost drove off the road.  “Chicken runs at midnight?  Where did you come up with that?” I asked.

Amy laughed with me and said, “I don’t know where it came from.  It just came out.”  It was total nonsense, but it was totally Amy.

Amy had to return home for treatment so she was unable to travel for the final game in the playoff series.  But when I got to the stadium, someone handed me a phone message from her.  It read:  “Dear Dad, Chicken runs at midnight.  Love, Amy.”

As I was holding the note, the second baseman, Jose Lind, who spoke very little English, noticed me looking at it.  “What’s that?” he asked.

“Chicken runs at midnight,” I answered with a chuckle.

Amy was at home with her younger brother Tim, watching the game on television when they heard one of the players yell, “Chicken runs at midnight!”  They screamed and howled with laughter.

From that point on, it became an ever-present family motto.  We’d start and end phone conversations with it.   When a newspaper photographer laughed about my funny stance in the team picture, I told him about the “Chicken runs at midnight” phrase that had come from it.  He sent me an enlarged photograph with those five words boldly printed underneath.

Those five silly words took on a meaning all their own.  They meant absolutely nothing, but to our family they came to mean everything.  “Chicken runs at midnight” represented the love, the bond, the sense of humor and the baseball we all shared.  They also represented Amy, and we were losing her fast.

We lost that final game and with it went my dream to go to the World Series.  The loss hurt deeply.  It was my last chance to share that dream with Amy.  Three months later she lapsed into a coma.

I had been praying so hard for Amy to make it. I never wanted anything more in my life.  Through her illness, I had regained the faith of my youth.  Although many teens drift from religion, I was an oddity.  Those were the years I went to daily Mass, prayed novenas and rosaries and was even a pontifical server, which meant I served for the Bishop.

Into my twenties, religion took a backseat to baseball.   By the time I was forty, I was no longer misseing Mass but God was still not the center of my life.  Then, at forty-six, when Amy got her brain tumor, my world turned upside down and God ended up on top.

Sure, I pleaded and begged God to heal my little girl.  But I also found the faith of my youth again. I knew that Amy would be in God’s care regardless.  When it came time to say good bye, I walked in the hospital room and held her.  Tears poured down my face as I hugged Amy close and thanked her.  Her dream of becoming a teacher would never come to pass but she had taught me so much.  Through Amy I learned about love and joy and courage--right up until the very end.  Although I could never really be ready to say good bye to my Ames, I was ready to accept God’s will.

As we planned for the funeral, I was distraught to learn Fr. David Yetsko, newly transferred to the St. Maria Goretti Church in Arlington, would be saying the Mass. He had never known Amy. He had no idea how special she was. When we met for the first time to plan the Mass, I was surprised to learn Fr. David was from Pittsburgh. I quickly discovered he was a big Pirates fan, but rarely had the chance to go to any games. He did manage to make it to one game the previous season, however. It was the same one that Amy was at; the one where the “Chicken runs at midnight” motto was born.

When we realized the incredible coincidence, Fr. David held my hands and we wept together. It turned out that he was just the right priest to say the Mass. His eulogy truly captured Amy’s beauty.  He even managed to include “Chicken runs at midnight” in it.

Four years later,  in 1997, I went south to coach the Florida Marlins.  We upset the Atlanta Braves in six games to win the National League Championship.  The dream I held since I was a little boy then became a reality.  We were going to the World Series against the Cleveland Indians.

Although the Indians were favored to win, we held our own. After six games, the series was tied. Tim, who had just graduated from high school, was a bat boy at all six of the games. Then, for the last big game, another son, Mike, was able to take time away from college football to also put on a bat boy uniform.

The word “tense” does not describe this final face-off. In the ninth inning, the Marlins tied the score, sending the game into extra innings. In the bottom of the eleventh, with two outs, we needed just one run to win the game.  Second basemen, Craig Counsell, who my kids had nicknamed “Chicken Wing,” because he held his elbow up high when he batted, was on third base. 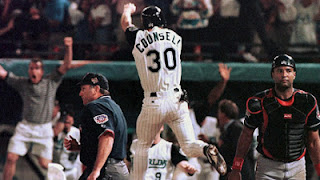 We watched breathlessly at the wind up and the pitch. It was a hit!  Craig ran home and scored the winning run. We won the World Series! The home team   crowd of 67,000 fans went nuts; everyone cheering madly and jumping wildly about.

Tim came up and ran to my arms, pointing to the stadium clock. “Dad, look!” he screamed. “Chicken ran at midnight!”

The large stadium clock read twelve midnight. It was  Craig, “Chicken Man” who had scored the winning run at midnight. My adrenaline surge disappeared as if I had been zapped with a tranquilizer dart. The crowd disappeared.  I was only aware of Mike and Tim as we held each other and bawled.

I wanted to call Amy.  She knew how much the World Series meant to me.  But I knew, she was there.  I could feel it. She was there with us. Somehow, some way, that nonsensical phrase, “Chicken runs at midnight” had been a prophecy that now connected us to her. Knowing that Amy would be with Him, God provided us with a connection between our two worlds during that incredible moment.  The boys and I hugged and cried and hugged and cried.  No one else could begin to understand what it all meant to the three of us.

After all the celebrating had died down at around 3 a.m., I walked back to the locker room and got my brief case. Opening it, I reached into a side pocket and pulled out the phone message I always carried with me. “Dear Dad, Chicken runs at midnight.  Love, Amy.”

Rich Donnelly is one of the most experienced coaches in the Major Leagues. He currently serves as an advisor for the Pittsburgh Pirates. He completed his 26th season as a Major League coach in 2007 and his second with the Los Angeles Dodgers. To have him speak at your event, contact him through CMG Booking, (657) 777-2535.