The Strength to Trust Again, by Madonna Silvernagel Madonna (Richter) Silvernagel had suffered a parent’s worse fear, not once, but twice—the death of two beloved baby daughters.  She could not have known that she herself would die young, but her legacy lives on in a powerful way. Her daughters, now married with families of their own, give thanks that their mother did not give into fear or the judgment of others.  This story is sad in many ways, yet, it imparts courage and joy to all who are open to life. Here is Madonna's story in her own words.


My two little sons Corey age four, and James age one, hovered around to see their new sister when I brought her home from the hospital. It was as if she was an adorable little doll.  After all the blue around our farmhouse in Braddock, North Dakota, now we could not get enough of pinks, ruffles and ribbons.

From the start, Theresa was an easygoing baby.  But at three-weeks old she awoke in the wee hours one morning and would not get back to sleep.  I fed her and rocked her, but she refused to settle down.  Even though her skin felt cool, I took her temperature.  It was 102.  I wrapped her up in a warm blanket, and rocked her some more.  By 6 a.m. her temperature had reached 103.  I told my husband Pat that he had better feed the cattle right away so we could bring her to the clinic when it opened.  During our frantic one-hour drive to Bismarck, as we fervently prayed the rosary, Theresa’s lips began to turn blue.  “Dear God, take care of her,” we prayed.

Once at the clinic, we sat impatiently in a waiting room full of sick children.   I knew something was terribly wrong and I could not stand to wait any longer.  “Either we see a doctor or you are going to have a dead baby on your hands,” I demanded to the receptionist.  We were brought in immediately.

“We are going to do a spinal tap,” the doctor announced.  “It will be better if you sit in the waiting room.”  Within the hour, Theresa was transferred to the adjoining hospital.  Throughout the day Pat and I prayed continuous rosaries.  No one seemed particularly worried as they kept us updated on the tests that were being administered.  At 7 p.m. a nurse came out with unimaginable news: “I am sorry but your little girl died.  Would you like to come in and hold her one last time?”

It was if time stopped and none of this was real.  My ears must have deceived me.  “No, it couldn’t be!” I cried.  I knew my baby was sick, but never once had I imagined she would die.

I held her limp little body, which was wrapped snuggly in a blanket and sobbed. “You can’t be dead,” I cried. “You can’t be gone.”  Pat also held her and cried.  We were devastated.  When we buried her on December 23, 1976, we buried a part of ourselves.  It seemed Christmas did not come that year. 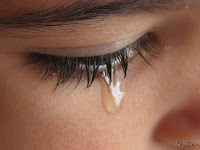 Our boys were still babies themselves.  Our grief had to take a backseat to the here and now of caring for them.  They were sometimes confused to see mommy crying and they wondered where their baby went, but they were too young to understand the immensity of what we had lost.

No one was really sure why Theresa had died.  Her death certificate read Reyes Syndrome for lack of any better clues.  Two years later the blessing of another baby girl helped fill our loss.  Sarah was beautiful, and perfectly healthy. Her sunny disposition brought us great joy and her intelligence amazed us.

When Sarah was eleven months old, and developed flu-like symptoms, I could not help but worry.  Once you lose a child, that possibility seems to hang over every illness.  Several doctors gave various diagnoses:  "She's teething...It's just a virus."  It bothered me that they were brushing me off.  I took her to an intern in Linton, a smaller town.  He listened to my gut feeling and ran some x-rays.  One of Sarah's kidneys was shutting down and the other would soon follow.  We were sent to The Mayo Clinic in Rochester, Minnesota.  Although I was scared, there was an element of relief at being sent to one of the finest, most medically advanced clinics in the country.  If anyone could help Sarah, they could. I also believed God would not take another one of our children.  Surely, we had already been through enough.

Once we got there, Sarah’s health deteriorated quickly.  That evening a priest and nun came to our room. The priest offered to give Sarah the final blessing of the sick. At that point, Sarah was suddenly animated and cheerful, as if she was not even sick.  It almost seemed inappropriate to be giving the final sacrament to a child who appeared so healthy.

When the priest took out the holy oils, Sarah quickly dipped her hand into the bottle then reached over to Pat and me and made the sign of the cross on our foreheads. We were in awe.  Sarah was only fourteen months and had never done anything like that before.  That evening she slipped into a coma.  The priest came back later and said: “That blessing was for you not her.  I believe she knew what you would have to endure in the days ahead.”  Twelve days later, Sarah died.

Our grief was overwhelming.  A year with an angel had given us such joy.  Without her, the world was a darker place.  There were no words to describe the loss to her two big brothers when we returned home without their cherished little sister.  Life went on, but it was so much harder this time.  Why did God allow this to happen?  I knew of handicapped children in other families, but God chose to take our healthy, perfect little daughter.  So many children suffered child abuse.  Why had God not taken one of them and let us keep Sarah?

It was determined that Sarah had died of idiopathic infantile arterial calcification.  Her vital organs had shut down and began to calcify. It had to be what caused Theresa’s death two years earlier.  We were informed that any future children would carry a 75% chance of inheriting this genetic disorder.

The following year our drought-starved crops left no harvest in which to support our family.  We drove to Oregon and stayed with one of my sisters that summer to earn money painting houses.  Life was just so burdensome.  I often visited Sarah’s grave and collapsed in tears.  “Why, Lord, why?” I cried. I wanted to trust God but it was hard. 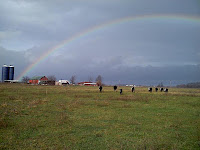 The next year, rains again renewed the earth.  But I wondered, what of our own renewal?  Did we dare have more children?  Pat and I prayed the rosary every night.  After two years of praying without any clear answers, we attended a Marriage Encounter weekend.  During this time, I learned that Pat resented me.  He believed our losses had not hurt me as much as it did him.  I strove to be strong for the family and maintain a level of normalcy.  I had talked about our losses in attempt to heal.  Pat felt it hurt too much to talk. For the first time we uncovered pain and resentment that still lay buried.  We cried and hugged and relived the pain we had experienced together.  Then, just as the rains replenish the earth our tears renewed  our relationship.

That weekend healed us and gave us the faith to be open to new life.  It would have been easy to say we were not going to have any more children, but we felt we needed to give God a chance to work in our lives.  We decided to be open to life and trust that everything would be in His hands.

Others did not see it that way.  As my pregnant belly grew, so did the small-town gossip.  Losing two children had brought sympathy because it had been beyond my control, but this pregnancy brought harsh opinions: “She should know better.... How foolish to have another child when they know the risks...Don’t they know what causes that? “ 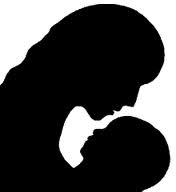 I gave birth to another girl. Cindy was born looking amazingly identical to Sarah. Of course there was a fear that we would one day lose her, but for the moment, we loved her with all we had. There was no test to determine if she carried the disease.  Living to the age of two was the only assurance to know whether she was affected or not.  When I became pregnant again just five months later, the cold shoulders of my neighbors grew frigid.  Yet, our faith carried us through.  God’s opinion was the only one that mattered. Susan was born looking exactly like Theresa did at birth.
Raising my beautiful daughters, under a cloud of uncertainty was hard.  But every time I was tempted to fear, I recited part of the Lord’s prayer over and over:  “Thy kingdom come, Thy will be done.”  I also prayed:  “I can do all things through Christ who strengthens me.”

Our girls are twenty-one and twenty now. Through our faith, joy fully blossomed in our family again.  Our faith touched someone else, too.  For twenty-four years, on May Day--the anniversary of Sarah’s death--a lady in town sends us a card and flowers. She knew our precious Sarah and she never forgets.  In her cards she expresses how much our example has helped her to grow in her own faith.  “I truly know that there is a God and through your faith, you have helped me find my way to Him,” she wrote one year.

Our pain strengthened us because we allowed God to work in our lives.  Without Him, we would have quit church, and stayed away from people with young children.   Our losses could have driven Pat and me apart.  Instead, we gradually learned to trust and embrace life again.  God rewarded our trust and gave us two more little angels.

Madonna and her husband Pat were both the tenth child in their families.          They had farmed and ranched west of Braddock, ND.

Madonna was a beloved aunt of many, including two priests from one family; Frs. David and Thomas Richter.   Early on Nov. 1, 2005, Madonna and Pat were returning home from morning Mass when they collided with a southbound car with three men returning from the night shift work at Bobcat.  Madonna, 55, died at the scene. Patrick, 57, died eight days later, never having recovered from his coma.

Madonna shared her story with me for the Amazing Grace for Mothers book, two years before she died. Three years after her death, I spoke at a retreat that her daughter Cindy attended.  “Thank you for writing my mother’s story,” she said. “There were things I never knew until I read it. I am so thankful.”  Both girls are married with children of their own, grateful for their lives and their parent’s legacy. Let us pray for the repose of their souls and for their loved ones who miss them very much.