Meeting My Daughter by Marsha Stocker

Marsha and Jim discovered they were expecting a baby while unmarried and still in college.  They gave her up for adoption. It was a secret they kept even from their own brothers and sisters. The couple later married and raised three children together. Then, over twenty years after giving up their baby girl for adoption, she called and wanted to meet them. How could they explain her to their families? And how would they tell their other children about the sister they did not know existed?

Christmas break from college was always great, but it was especially enjoyable during my senior year. With graduation so close, I had much to look forward to. I basked in the holiday cheer with my parents and five siblings.   By January, however, there was something else on my mind; motherhood. My boyfriend, Jim and I had dated for four years. Only recently had we become serious. We had given in to temptation, just once. That was all it took. When the pregnancy test confirmed what I suspected, I immediately told Jim. He expressed his love and wanted to marry me. But we had never previously even talked of marriage. "No, " I said,"This is no way to begin a marriage."

I confided in my twin sister, Margot. We were roommates at the University of Kentucky and had always been close.  I knew she understood and felt my pain. "What are you going to do?" she asked.

“Jim and I discussed marriage, but I do not want to make a life commitment based on a pregnancy,” I explained. I could keep my baby, but what kind of a life could I give a child right now?  We decided  to place our child for adoption. “

It was the seventies and abortion had recently been made legal. I could instantly and discretely change my situation. But as a committed Catholic, abortion was not an option. We knew it was not our place to interfere with God’s plan for our baby.

Telling my parents was extremely difficult. They were so very disappointed and asked that I not tell others about my situation. Out of respect for them, I agreed. During my visit home at spring break, I was still able to conceal my pregnancy. I did not return home again until after the baby's birth on September 4, 1976. 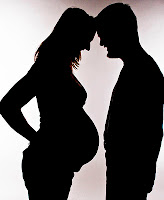 For the nine months that I carried my developing child, the little kicks reminded me that there really was a little life growing within me. I prayed often for my baby and took care of myself knowing that the baby needed to be healthy to get a good start in life. Catholic Charities allowed me to select the parents; a couple with twin boys. Being a twin had always meant so much to me. Now, that experience would be a part of my child's life too.

Margot was at my side during the miracle of my little girl's birth. I named her Margot, after my twin sister. Although I never wavered in my decision, that did not prevent pain over separating from my own flesh and blood. Jim was in the waiting room because back then, only a husband had the right to be in the delivery room. It was an emotional time for him, too. He tearfully asked me to marry him again. Even in the throes of love for both my baby and Jim, I held firm to our decision. The sacrament of marriage was intended to last a lifetime. It was a commitment I was not ready to make.

I was not allowed to hold my daughter in my arms, but I held her in my heart. Margot and I peeked into the nursery at her; she was beautiful. Jim and I wrote our daughter a letter and also purchased a 14k gold necklace with a cross for her new parents to give her one day. Although my own mother wanted to keep her first grandchild's birth a secret, she too felt the pain of separation. She wrote her own letter on the day the baby was born:  "...Be a very good girl now and I will see you one day in heaven. Always know that you will have a special place in my heart and in my prayers....'

I had already begun graduate school at the University of Kentucky and missed only a couple days for the delivery. I transferred to Arizona State University the following semester and earned a master’s in special education. Jim and I had a bond and love that survived several jobs, schooling and a long distance romance. We married in October of 1979 and had three more children together, Erica, Lindsay and Clay.

I experienced boundless joy at the births of our other children, but there was always a part of me that belonged to my first daughter. Yet, although I thought of her often, God gave me a great sense of peace knowing that we had chosen life for our child and placed her with a loving, Catholic family.

During the eighties, there was a growing movement for adopted children to seek out their birth parents. Jim and I fully expected that our daughter would one day find us. When her eighteenth birthday came and went, and then her nineteenth and on into the twenties, I sometimes wondered what happened. Why did she never contact us?

Then a year-and-a-half ago, I came home from youth group where I am a leader, to find Jim on the phone. He immediately motioned for me to pick up the other phone. Margot had finally called! My hand shook as I picked up the receiver. "Hello, this is little Margot," she nervously said in a voice identical to my other daughters. She had decided it was time to contact her birth parents. First, she also had to overcome her fears of rejection and have the courage to trust that God would guide her.

My little Margot had been renamed Susan.  She was home on break before returning to her teaching job in Ireland.  We talked for over two hours.  Susan expressed her desire to meet us.  As excited as we were to hear from our daughter, we knew accepting her into our lives would not be easy. Only my sister and parents knew about her.

My decision all those years ago was based on what I thought was best for my daughter. Now, if she wanted to be a part of our life, I wanted that too. It was a Wednesday night when she called.  The following Saturday, she made the one-hour drive to our house. Our two daughters were away at college and our son was out for the evening.

Butterflies filled my stomach when I saw the beautiful young lady stepping out of the car that had pulled up to our house. Jim and I nervously looked at each other. Susan walked to the door with a little green box full of baby photographs, report cards, school pictures and our letters. She smiled nervously as we opened the door. As she walked through the door the first words out of her mouth were, "Thank you for giving me life."  We hugged our little girl, all grown up now. As I stood back and gazed at her, my heart fluttered. She was wearing the little gold cross we had bought for her so long ago. Her mother had told her to keep the necklace for a special occasion. This was it.

She had all the mannerisms of our other daughters and had features from both Jim and I. We spent six hours catching up on the life of our first-born. Tears streamed down my face as I gazed upon the pictures and report cards of my daughter. I was deeply touched to learn Susan had become a Special Education teacher just like me.

We all knew that this was the beginning of a new relationship for us. It was not an easy road, but  we had to step beyond our own fears and again do what was best for our daughter. We broke the news to our children, family and friends. Everyone, especially our own children, readily welcomed Susan into our family.

The Monday following our meeting, Susan sent us an e-mail saying, "At church on Sunday, I could have knelt there and said thanks to God all day. God really does work wonders. It has been quite an amazing weekend."

Not only did Susan become a treasured member of our own family, but our family became a part of hers. Carol, Susan's adoptive mother, e-mailed us shortly after our first meeting. "I have always wanted to communicate with you spiritually over the years to let you know what a beautiful, sensitive and gifted child you gave us to love and cherish. Now I can tell you myself and thank you from the bottom of my heart. We know Susan is now complete with all of you in her life."

That summer our families attended a summer conference at Catholic Family Land in Ohio. At one point Carol took me aside  and said, "At a time in your life when you could not care for Susan you gave her to us when we really needed her. Now, at this time in Susan's life, she really needs you and your family, and we want to share her with you."

We have all become extended family to each other and often gather together for holidays. In the end, none of us has lost anything. We have all gained so much.
###

Marsha Stocker was born in St. Charles,MO in 1953. She graduated from the University of Kentucky in 1975 and received a Master's Degree from Arizona State University n 1976. In 1979 she married Jim Stocker, who was raised in Louisville, KY. Marsha is a special education teacher and Jim is a police officer. They live in Lexington, KY and have raised three children, Erica, Lindsay and Clay.

Editor note: This story was published eight years ago. Everyone is still one big, happy family as evidenced by these pictures taken just this past summer. 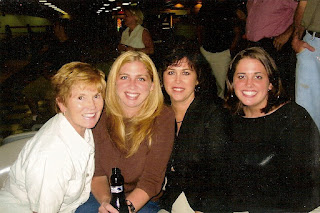 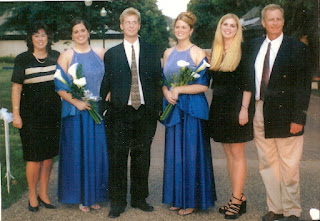 "Meeting My Daughter" is part of a collection of stories in Amazing Grace for Mothers.