It was World War II when Eldon Dahl, a school mate of my husband's and a pilot in the United States Air Force was shot down over Italy. He was returning from a bombing raid near Foggia, Italy on August 25, 1943.  Parachuting from his flaming B-17 bomber, which was riddled with bullets from German fighter planes, he landed near a small Italian village. 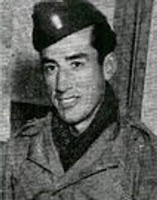 His parachute had landed him safely in a forest only to be captured by the Italians.  After being in two prison camps, Eldon managed to escape into the mountains north of Rome, with a group of other Allied prisoners.

Eldon became separated from the others and wandered alone on foot through mountains and villages. Scavenging around the woods one afternoon, his empty stomach detected the wonderful aroma of food cooking on an open fire.  Following the scent, he discovered two women outside, preparing food near a farmstead.

Hoping they would be friendly and willing to feed him, Eldon made his way toward the women.  All of a sudden, a little blonde-haired girl around 10-years old, wearing a bright white dress, appeared by his side. She motioned with a finger over her lips, to remain quiet. Then, taking him by the hand the little girl led him in the opposite direction to stand behind a thicket of bushes. It was at that point that two German soldiers appeared and began talking with the women.  Eldon realized then that he had just narrowly avoided recapture. When he looked around the little girl had vanished. She was nowhere to be seen. Eldon was convinced the little girl in white was his guardian angel. Knowing that his guardian angel was with him, gave him faith that he would somehow get back home.

For two months Eldon traveled alone for more than two hundred miles on foot before his final breakthrough of the turbulent front lines to return to the American zone near Cassino on November 13, 1943. Two weeks later he returned to the United States.

Eldon always credited The Little Girl in White, an angel of God, with saving him and guiding him safely home.

Editor's note: This story, told to me by Doris Fischer of Rhame, ND, is part of the collection in the Amazing Grace for the Catholic Heart.